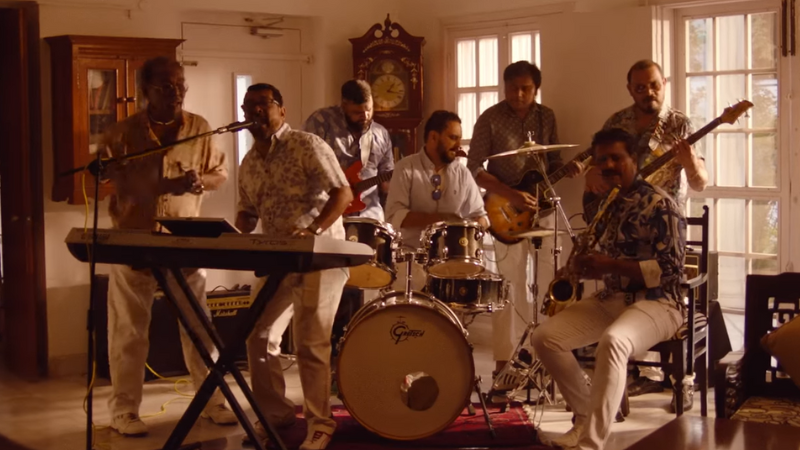 “A band that caters to all age groups”: The In Time Band brings back 1970s Karachi rock and roll – Music

Years after first picking up their instruments, the Goan-Christian band have their first-ever music video with ‘Zindagi Ka Safar’.

Let’s go back to the 70s with ‘Zindagi Ka Safar’ [Journey of Life]presented by the In Time Band, a group of men carrying decades of music in their hearts.

Around 50 years ago, Karachi didn’t look like Karachi today – you’d be surprised to see the city of lights, its thriving music scene and iconic fashion. Luckily for you, all is not lost. Music dances through the veins of those who go through years and years of change. As they say, rock and roll is forever.

‘Zindagi Ka Safar’ has been a safari [journey] which is proper to it in the making. Being In Time Band’s very first music video, it “pays homage to the spirit of disco” and was meant to be a “re-recording of a lost musical treasure from Karachi’s history”.

The clip literally takes a page from the short film by Pakistani-Canadian filmmaker Hamza Bangash 1978, based on the life of Norman D’Souza, a rockstar whose life changed dramatically after the Islamization of Pakistan. “The music video takes place around the time things were changing. From my conversations with people who lived through that era, the changes were less overnight and more creeping,” Bangash said. Pictures.

The clip opens with a house party awash in warm light, the sound of a saxophone drawing us into the plot. “We are with Norman [played by Zeeshan Muhammad], in the 70s, as his bandmates try to convince him to present to the music producer whose party they are throwing,” Bangash explained. “Norman is failing because of the bigoted views the music producer has towards his community. However, as the party progresses, he meets the love of his life. Later, we see the real Norman reflect on his youth while listening to his song on the radio. It’s a bittersweet journey.

The filmmaker revealed that ‘Zindagi Ka Safar’ is a re-recording of an original song by the group. It was specially reserved for 1978, hoping for a standalone music video. “It’s always been a dream of mine to release a music video as part of one of my films – I never thought it would be for a short film though – life works in a fun way.

” The short movie, 1978, was a huge success — we had our world premiere in competition at the Locarno Film Festival and even aired on Canadian TV. The success inspired my team and I to create something special for In Time Band and it led to us running a successful crowdfunding campaign on Kickstarter,” said Bangash.

The campaign helped the project lead CityLights Media – “a Canadian-Pakistani production house that amplifies marginalized voices through film and digital content” – to raise funds to shoot the music video. Most of it was contributed by executive producer Porto Celyon who fell in love with their campaign and dedication to honoring Pakistani artists.

Bangash called it “a labor of love” that took months to shoot. It has been described as a vibrant throwback to Karachi’s glory days of the 1970s. “I’m so happy it’s out into the world now,” he added.

Where does the In Time Band come from? If this is your first time hearing about it, you really missed something. “[It] is the latest iteration in a collection of incredibly talented musicians from the Goan-Christian community, headlined by Norman D’Souza and Clifford Lucas,” said Bangash. “Norman was a legend in the 70s and used to play with The Talismen during that time, they even toured across the Far East!”

The filmmaker met the gang through his producer Carol Noronha as part of his research for 1978. “We collaborated with them on the film and stayed in touch. They still perform fairly regularly in Karachi and we are delighted to have been able to produce their very first music video,” he said.

In a conversation with Pictures, D’Souza traced the start of his career to the age of 14, juggling school and late-night concerts, hailing a taxi on the other side of town, all for the love of music. “At that time, I used to entertain my friends with a guitar and sing Elvis songs in blue suede shoes. They used to get really excited, they were like ‘Come on Norman, sing a song for us’ and I used to do some hip shaking. I was young of course, excited, I wanted to be like Elvis.

The musician’s stars twinkled as fate carried his boat to all sorts of shores. “In the 60’s and 70’s there were only Christian bands in Karachi and Karachi was swinging at that time. People came from Lahore, Pindi for entertainment because all the discos, night clubs and all kinds things were happening here. Karachi was like New York — that’s what people said, Karachi is our New York. We used to have artists from abroad, bands, singers [and] dancers [too].”

After building a long list of bands he’s been in and collaborated with, D’Souza finally started one with Lucas 15-20 years ago. At first it was a trio but over the years the In Time Band has grown.

Commenting on why the song didn’t originally become a hit, Lucas said: “There was a lot of prejudice, racism – that’s the main reason why a lot of our Christians didn’t have a opportunities at the time. ‘Zindagi Ka Safar’ was originally written in the 80’s by my band which was called Vision at the time. We wanted to present PTV Music Channelthey took our demo but they never called us. There’s been no exposure for the song like bands like Strings have had – that’s what our story told by Hamza in 1978 is,” he explained.

“It’s nothing.” Elaborating on how they were treated, he said, “There are a lot of things that we didn’t depict in the film, like how we were attacked by the Jamaat-e-Islami people in Village . I was playing and they threw my keyboard in the air – we were saved from being beaten by a group of people on the buses. It was the time of Zia, that’s when the country, through Islamization and five-star hotels, began to shut down live music and nightclubs. These are eras that we have been through, that’s why it’s called ‘Zindagi Ka Safar’ because we never gave up on our music. We went through hard times and good times, and we kept playing.

The group is still in the processing phase when it comes to figuring out the fact that their first music video has been released. “Sometimes I still pinch myself and wonder if I’m dreaming,” Lucas said, adding that it also gave the band a spark, “a kick in the ass” to get them to write more music.

You can find them on their Facebook page and they also play in private shows. “People hire us for private parties and clubs. The music we play is very versatile – we can play songs from the 40s, 50s, 60s all the way up to today – [such as] Lewis Capaldi and Sia. We pride ourselves on the versatility of different genres of music that can be played. We also do Urdu, Punjabi and Arabic.

D’Souza added that they had to do it to accommodate the crowd. “We’re a group that tries to cater for all age groups – we can entertain people from 60+ and under,” Lucas said. “I think we’ve all come to terms with the fact that as long as our hands, legs and health allow us, we’ll keep playing.”

1978 was achieved through extensive research and collaboration with the Goa-Christian community of Karachi, a community that was “disproportionately affected by the radical cultural changes in 1970s Pakistan”.

Producer Noronha, also a member of the Goan-Christian community, commented on the musical invasion before social media was a thing. “Before social media, the Goan-Christian community was very active! From all the stories my dad tells me, in the 60s and 70s, our community played to live audiences in clubs, hotels, discotheques and Christmas/New Year/Easter balls as well as consulates and embassies.

“Even until a few years ago when social media wasn’t really active, as a teenager I would go to rock shows in our church grounds, private parties with our jazz bands and from live pop, to events at the KGA (Karachi Goan Association) hall and of course, weddings!

She revealed that the community also took an active role in the commercial industry – playing commercial jingles or with popular bands during the era when Indus music, PTV and MTV Pakistan was active on television. “A good number of the band members were from the Christian community and played bass, guitar, drums and several other instruments.”

Noronha added that social media is just a very recent development – ​​even before that, the Goa-Christian community flourished in the Pakistani music industry.