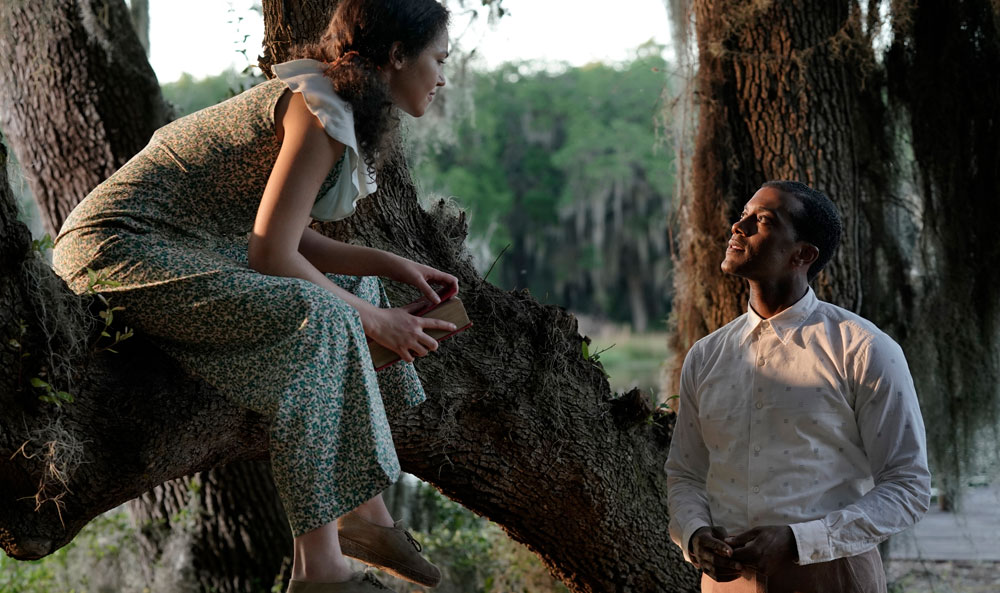 Like an ice cream parlor that offers you the choice between pistachio or strawberry and nothing else, the films that Tyler Perry has been producing for 20 years come in two flavors: comedy and soap opera. It is worth noting, in this case, how the flavors blend together. More often than not, they’re stacked next to each other, like when Madea, Perry’s sassy loudmouth, suddenly falls down in the middle of a dramatic scene. Still, there’s a way the antique, saucy scale of Perry’s comedy bends the drama by being more over the top. That’s why his movies are all one piece even when they’re all over the place. They feed you pistachios and strawberries, and by the time it’s all melted, you taste just one flavor. Call him Nutty Tyler Perry.

All of this makes “A Jazzman’s Blues,” which premiered last night at the Toronto International Film Festival, a Tyler Perry film with a new flavor. Set in the rural community of Hopewell, Georgia in the late 1930s and 1940s, it’s a sprawling story of forbidden love, art and ambition, deep racial hatred, and black people posing as of white people, a subject the film tackles with an emotional explosiveness that I thought Rebecca Hall’s “Passing” lacked. It’s also a murder mystery, although in this case the mystery isn’t so much a whodunit as it is why this tragedy happened.

“A Jazzman’s Blues” is brimming with melodrama, but it’s not staging widely. It’s closer to Perry’s version of a Douglas Sirk movie, which takes a romance and escalates it until complications grow and twist like vines. Perry went public with the fact that the screenplay was written 27 years ago (it was, in fact, the first screenplay he ever wrote); after he finished it, he just stuck it in a drawer and kept it there. But the years have been favorable to this scenario. “A Jazzman’s Blues” has the aging wine feel of something deep, rich, tart and earthy.

In 1987, a package of old letters is given to the Georgia Attorney General as evidence in a 40-year-old murder case. The film then flashes back to 1937, when Bayou (Joshua Boone), in her late teens from a family of musicians, meets the proud, fair-skinned Leanne (Solea Pfieffer). An amateur jazz singer, Bayou looks delicate enough to need someone’s protection. He is disarmingly shy, overshadowed by a tough mother (Amirah Vann) who is a washerwoman (and a damn good singer too), and he is despised by his trumpeter father (E. Roger Mitchell) and overbearing older brother, Willie Earl (Austin Scott).

So does this innocent, crumpled kid have it in him to make a play for love? He seems to be far too sensitive. But Leanne sends a paper plane flying past her window every night to signal that they are to meet. They do, near an oak tree draped in Spanish moss, where she teaches him to read and they discover they go together. They have the kind of communion from old movies that feels not only romantic but spiritual. It’s a love that comes is.

Leanne, however, has dark secrets that make her more vulnerable than she looks, especially when her own stubborn mother is around. After Bayou proposes and Leanne accepts, the mother reacts by taking the daughter north. Bayou writes him letters, but they remain unanswered (they are intercepted). And when Leanne returns, in 1947, she’s married – to a white man, who thinks she’s white.

Perry is the rare filmmaker who understands the politics of black and white as it unfolds in Southern kitchens and living rooms, in communities that were separated between homes and shacks but still had all kinds of interactions. Leanne’s passing gives her a window into the white world and some of the ugliest things she would otherwise have seen there. It also gives the film an undercover suspense. So when Bayou and Leanne rekindle their relationship, because they just can’t help themselves, we sense the danger. It’s love mixed with racial nitroglycerin.

We also notice that Bayou is no longer the radiant wallflower it once was. Joshua Boone delivers a remarkable performance, evolving before our eyes. Yet, the more confident Bayou becomes, the more love seems to drift away from him. Forced to leave Hopewell when he is wrongly accused of having whistled at Leanne (the same accusation which, in 1955, will lead to the lynching of Emmett Till), he travels with his brother to Chicago, where they audition to perform at a whites-only supper club (where the entertainment is black).

Bayou becomes the star attraction, crooning the standards with the smiling sweetness of Nat King Cole. But Willie Earl, consigned to the group with his trumpet, begins to drown in bitterness and heroin. “A Jazzman’s Blues” knowingly blends black experience tropes with a kind of studio-system finesse. The musical sequences, which range from rowdy juke-joint blues jams to beautifully staged club gigs (with twirling choreography by Debbie Allen), are exhilarating. They give the film a moving boost and make you wish Perry was directing a full-on musical.

Perry relishes melodrama, but by rooting these overmature relationships in a clairvoyant historical framework, he sustains our involvement in a rapturous way we’re not used to in his movies. “A Jazzman’s Blues” shows you that Perry, theoretically, could have been a very different type of filmmaker (although if he was, it’s unlikely he would have been as popular or powerful). It’s something I felt when I saw his work on television — shows like “The Haves and the Have Nots,” which cast a slicker, more sophisticated spell than his films. Where the films can seem stuck together, he pulls us here with inexorable, slow-burning passion, building a story of love and violence on twin streams of social reality and fate. “A Jazzman’s Blues” may be based on an old script, but for Perry, it feels like the start of something new.