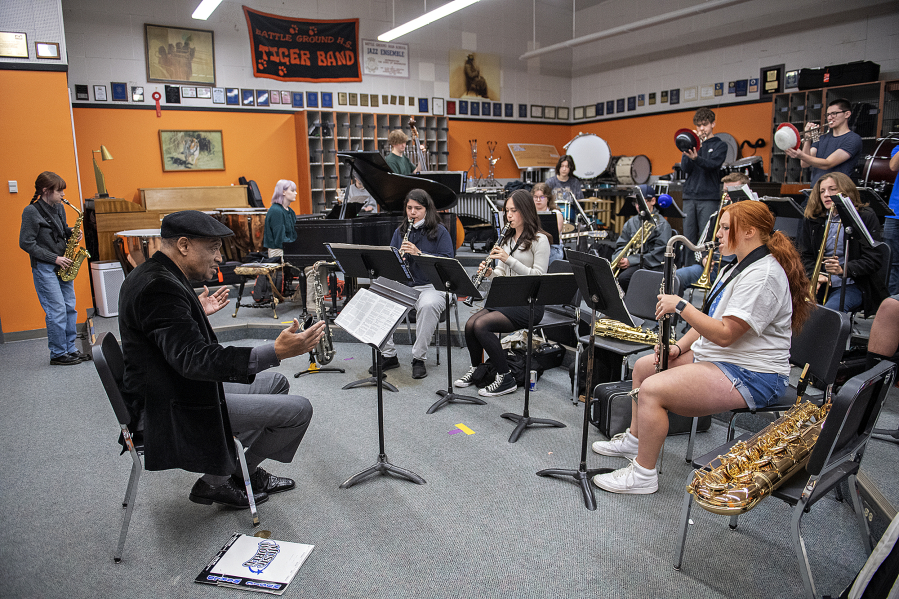 BATTLEFIELD — Greg McKelvey was skeptical when he interviewed for a job as a music teacher in this rural Clark County town in the mid-1990s. You didn’t have to search to find Confederate emblems on cars in the high school parking lot, he said.

“I had a lot of reservations coming here,” said McKelvey, who is black. “I haven’t seen too many people who looked like me.”

The students swore he would be, and McKelvey believed them. Beginning in 1996, music educator and orchestra teacher McKelvey has trained Battle Ground students together after together in the art of creating beautiful sounds together – whether jazz, classical or classical music. in concert – at Battle Ground High School and Chief Umtuch and Tukes Valley Colleges.

Over a quarter of a century, McKelvey and his student bands have blazed a steady trail of awards at music competitions and jazz festivals across the country, from the annual Clark College Jazz Festival to Essentially Ellington High School Jazz. Band Competition & Festival in New York. City.

McKelvey, 67, said he plans to retire – probably – at the end of the 2022-23 school year. He has a lot of things he wants to do: focus more on his own musicality, play “age-appropriate” basketball, and spend more time with his growing brood of 16 grandkids.

While McKelvey had been leaning towards retirement for a few years, he said he didn’t want to disappear from his students during the coronavirus pandemic.

McKelvey grew up in the town of Richmond, California, in a family that was not particularly musical but was into athletics. His father, Eural, tried professional-level basketball and was first accepted, then rejected because he was black. Eural ended up playing for the Harlem Globetrotters, a more skilled exhibition team than many NBA teams, McKelvey said proudly.

McKelvey was also good at basketball, but his strong academics earned him the privilege of studying music. It was a new direction in life, he says.

“I didn’t even know what a saxophone sounded like,” he said.

When McKelvey’s first bouts with his horn drew ridicule from his peers, he vowed to train hard all summer and wow everyone in the fall. That’s exactly what he did, he said.

Take note, music students: McKelvey insists that practicing every day — not once in a while — is what takes you to the next level.

“If you have talent, that’s one thing,” he said. “To develop this talent, you have to have an incredible work ethic.”

“It was the first time I had seen an African American do that, perform amazing music, and he looked just like me,” McKelvey said.

McKelvey won a basketball scholarship to Warner Pacific University, a Christian school in Southeast Portland. He was dedicated to music and performance, he says, but another talent emerged: teaching.

“I wanted to play, but I was advised to get a degree in education,” he said.

It suited him very well. McKelvey seemed to have a knack for communicating and inspiring young people.

“I like to see kids start at a certain level and improve,” he said. “I love it when that happens.”

McKelvey taught at Wilson High School in Portland for 13 years. (One of his students was bassist and vocalist Esperanza Spalding, who became a contemporary jazz superstar.) Then Oregon’s Tax Cut Measure 5 kicked in and schools’ music programs public authorities in Portland have suffered. That’s why McKelvey returned to the workforce and eventually came to Battle Ground.

“I figured I’d stay a few years and move on,” he said.

But the talent and determination of his music students impressed him, and he realized there was no point in moving away and starting over.

IF YOU ARE GOING TO

What: Jazz night at Battle Ground.

McKelvey gets up at his home in Aloha, Oregon, at 4 a.m. in order to arrive at the Battle Ground school no later than 6 a.m.

When The Columbian fell asleep in McKelvey’s music room at 7 a.m. on a recent Wednesday, the musicians of the advanced jazz combo seemed happily awake, rocking hard and soaking up their teacher’s compliments and criticisms.

“Sounds good,” he said. “The things you do now, you couldn’t do in September.”

But, he added, the soloists needed more metronome work to clean up their timing.

“He’s laid back, but he’s very truthful,” said Jonah Lipovitz, junior and first high school trumpeter. “He’s not going to hold back if it sucks. He has high standards and he wants you to do better.

McKelvey and his students in the group regularly spend time listening closely to recordings of jazz greats, even welcoming a few into their class. They’ve been visited by luminaries like Motown singer Martha Reeves, Tower of Power horn player Mic Gillete and McKelvey’s own star student since teaching in Portland, the multi-Grammy-winning Spalding.

“When I get a chance to drop by and hear the jazz bands playing,” said Battle Ground High School principal Charbonneau Gourde, “it’s a highlight of my day.

There is no doubt in McKelvey’s mind that jazz music has a future.

“When we go to these festivals, there are so many great kids playing so well,” he said.

McKelvey’s personal concerns about safety and racism inspired him to help create the Black Student Union. Despite the best wishes of his music students, there was a serious need for dialogue about race at Battle Ground, he said. McKelvey still serves as an academic advisor for the club, which meets in its music room and is open to any student who wants to promote better understanding between different ethnicities, according to the school’s club roster.

“My presence created a certain change,” McKelvey said. “Things have improved a lot, but there have been moments.”

What is true in many schools is true here, he noted. Children who don’t seem to fit in elsewhere often end up in the music room. It’s their safe space, he says.

McKelvey said he never had lunch in the staff room. He hangs out in the music room and gets to know his students.

“I love my kids. Love is genuine,” he said. “And when kids know you love them, they can take constructive criticism much better.”

Back to the roots

During his many travels with jazz bands, McKelvey once returned to his own elementary school in a predominantly minority neighborhood of Richmond. “I wanted my kids to see what it was like where I grew up,” he said. “And I wanted to show the kids at school that I was just like them, and if I could pull it off, they could too.”

The school principal was in tears as he thanked McKelvey and his students for their visit, he recalled.

“It was one of the highlights of my career. They made us feel like rock stars,” he said.

This is the real reason McKelvey keeps postponing his retirement, he said. He admitted he could still change his mind about next year.

“Music is fun. I want my students to have fun,” he said. “I’m in heaven when I’m in front of the group.”

A week of events in Cambridge and Somerville, from Inman Eats & Crafts to Campfire. Party