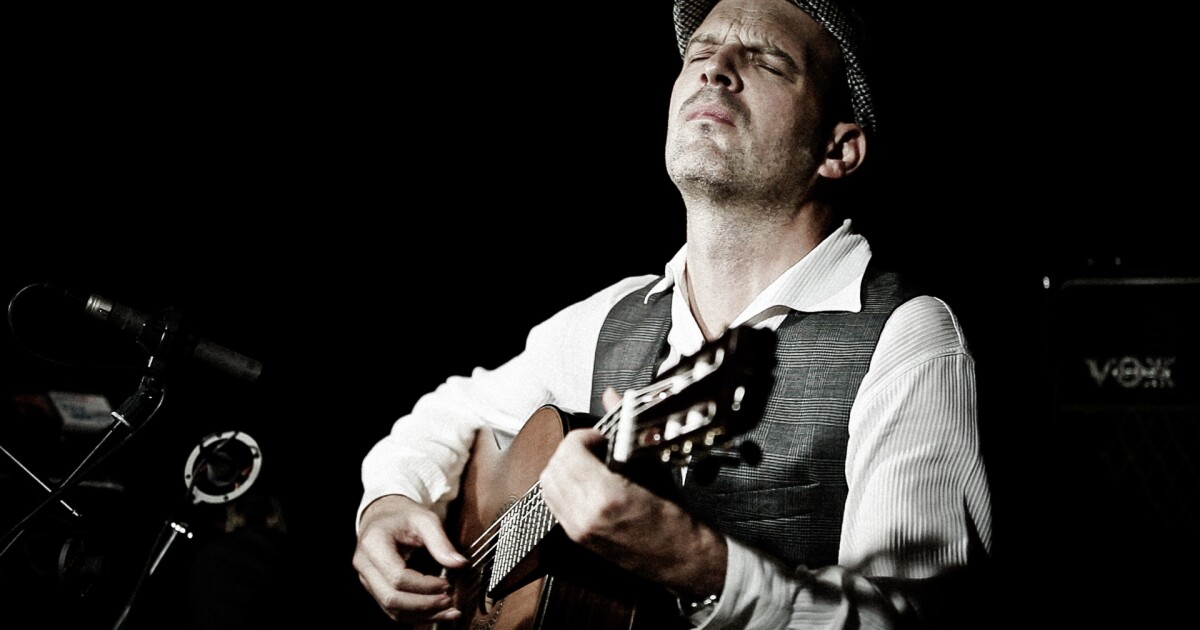 With the exception of Weather Report co-founder Joe Zawinul, who died in 2007, no other Austrian-born jazz artist has achieved as much notoriety beyond his home country as Wolfgang Muthspiel.

The guitarist, who is currently on tour with bassist Scott Colley and great drummer Brian Blade, counts Youssou N’Dour, Betty Buckley, Gary Burton and Patricia Barber among his many collaborators. He will open the La Jolla Athenaeum Winter Guitar Series with a sold-out Tuesday concert that will mark his long-awaited San Diego debut.

Muthspiel recently participated in several email interviews with the Union-Tribune, which published some of his responses in a Jan. 9 Sunday Arts article previewing the Athenaeum series. Here’s more from that interview.

Q: If you could sit down now and chat with Charlie Christian, Django Reinhardt, Francisco Tarrega or Jimi Hendrix, who would you choose and what would you most want to ask them?

A: I would love to be around all of them for a day and see how they work and live. First, maybe a day in the studio with Jimi. I would like to witness his process, which would answer my questions.

Q: You started playing the violin at age 8, then switched to guitar at age 12. Directly or indirectly, how did your training as a violinist influence your approach to the guitar?

A: The violin gives you a certain sense of intonation, like singing. it may have also influenced how I try to shape a sound on the guitar, and make it less plucky and more (vocal-like), to bring the note to life after it’s been produced.

Q: Austria has produced such gifted jazz musicians as David Helbock, Thomas Lang and Wolfgang Puschnig. But you and the late Joe Zawinul are the two Austrian musicians who have made an international impact. Growing up, were there any Austrian jazz artists who inspired you to think you might have a career beyond your homeland?

A: Zawinul was, and is, huge for me. But there was also an important guitarist named Harry Pepl, who was my teacher. He had a unique sound and was a heavy player, with a great sense of time. I think he was an international figure and he definitely had his own voice.

Q: Joe Zawinul told me in an interview that his jazz epiphany as a boy was hearing Fats Waller play “Honeysuckle Rose” on Voice of America radio. What was your jazz epiphany?

A: One of the first was Weather Report’s (1977) album, “Heavy Weather”. This magical synergy of Joe, (saxophonist) Wayne (Shorter) and (bassist) Jaco (Pastorius) was a mystery to me. I still love the songwriting, the groove, the way of soloing. I grew up with classical music, so this was about as different as it gets – and endlessly appealing.

Q: What was your first musical epiphany, whether with guitar in particular or music in general?

A: Certainly polyphonic singing in our family, to hear what it feels like to sing your own voice in harmony with others. It started very early, around the age of 4. I have three siblings.

Q: What kind of songs, specifically, did you and your family sing together as a child? Does the sound of the human voice inspire your guitar touch?

A: We sang many folk songs from our area, including yodeling songs, some of which are blues and slow, and also things like Mozart’s “Ave Verum Corpus” or Renaissance music by John Dowland. My father was a choir director and we heard this kind of stuff all the time. When our family gets together for birthdays, Christmas, etc., we still sing for many hours, now with the great voices of my nieces and nephews.

Q: Was there a cause and effect? In other words, did your epiphany inspire you to start playing music or writing, or were you already doing both?

A: This led to a burning interest in music, which never stopped. it laid the foundations for learning an instrument and for composing. It made me feel how the voices move and what it feels like.

Q: What was your most recent musical epiphany?

A: I recently heard for the first time the piece “Interlude” by the Polish composer Witold Lutoslawski. It’s absolutely amazing.

Q: With so many concerts canceled or postponed during the pandemic, did the unexpected openings in your schedule allow you to pursue projects that weren’t possible when you were touring regularly? If yes, what?

A: My musical life has continued during the pandemic, even though many tours have been cancelled. I had the chance to play a few more concerts and to continue my teaching at the Jazz Campus in Basel, Switzerland. But I was spending a lot more time with my family, which was a blessing.

Q: Brian Blade is a wonderfully creative and sensitive drummer. Are there certain things he allows you to do as a player that other drummers couldn’t do?

A: I feel very lucky to have this long relationship with Brian. It’s a luxurious situation to play with him, because he orchestrates music in such a deep and often unexpected way. He’s definitely interested in this conversation and his timing is so inviting. He quickly hears some kind of essence from a recording and builds the album around that essence. A lot of songs didn’t make it on my albums, because they were so different from that essence.

Q: I recently interviewed Bela Fleck and he told me that during the pandemic he actually lost his calluses by not playing live and focusing on things other than practicing his banjo. How often do you practice, what do you practice and have you practiced more or less when all your concerts have been suspended in 2020 and part of this year?

A: I need to train every day to stay in shape. As I play classical guitar and electric guitar, I need to practice both. I love to practice. I also like to play without intention or expectation in the morning. I would continue to practice even if I would never play a gig or record again, because it keeps me in a good space.

Q: Do you start with acoustic, then go electric? Do you learn or write new repertoire during your practice sessions?

A: The first thing is this kind of stream of consciousness playing on the acoustics, all that comes – without any judgment or ambition – a blank page to draw on. This puts me in contact with the music and with the instrument, and it is often fertile ground for composition ideas. Then there are some classic studies and scales, which I do acoustically, just to keep my sound clean.

On the electric guitar, I play a lot with a metronome or some rhythmic loops. I also still play jazz standards at home and often use my looping machine to create spontaneous accompaniments. It’s useful because, since I hear the loop over and over again, I can get into the details of its timing and phrasing, and realize what it’s like to play on it. Is it supportive, flexible, rigid, inviting?

Tickets: Full (a waiting list will be made at the door the night of the concert in case of cancellation)

Health protocols: All attendees must be masked and provide proof of COVID-19 vaccination or a negative test taken no later than 48 hours before each concert.

Want to brighten up your home? Renovator Store is your one stop shop