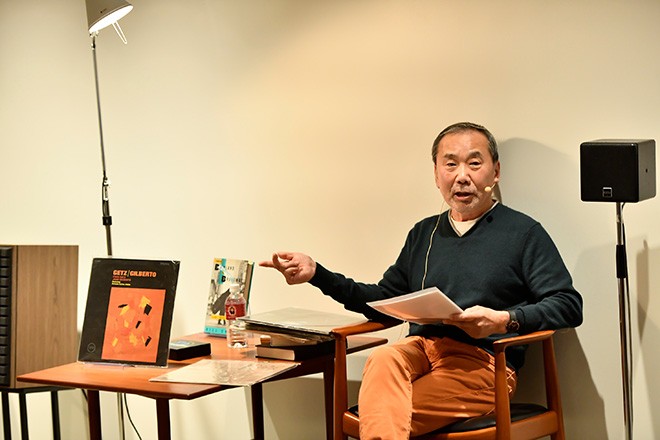 Editor’s Note: This article is part of a series on â€œLiving Authors! Â»Book reading and other events to mark the opening of the Waseda International House of Literature known as the Haruki Murakami Library.

Audience members were treated to author Haruki Murakami serving as a disc jockey while playing the works of jazz great Stan Getz and talking about his music.

Murakami performed records from his own collection at a session held on November 13 at the Waseda International House of Literature in Tokyo.

The event was the fourth in a series of sessions titled “Living Authors!” to mark the October 1 opening of the institution, also known as the Haruki Murakami Library, which is located on the main campus of Waseda University in the capital’s Shinjuku district.

â€œI listen to music in different genres, but I would like to start with jazz,â€ said Murakami opening the session, which he devoted to an examination of the life of the late American saxophonist.

The writer has occasionally recited the Japanese version of “Stan Getz: A Life in Jazz”, a biography of Donald L. Maggin, which has been translated by Murakami and is available from Shinchosha Publishing Co.

Getz was born in 1927. Although his family was poor, he obtained a used saxophone and began performing professionally at the age of 15.

The first track Murakami played was “Early Autumn” from 1948, when 21-year-old Getz was playing in Woody Herman’s band. Murakami then introduced other tracks explaining their origins in the larger context of jazz history, with occasional riffs on his own personal memories.

“I listened to this a lot when I was in high school, which really got me into Getz,” Murakami said of “A Summer Afternoon” from “Focus”, a 1961 album.

â€œGetz’s bossa nova is a world apart from everyone else’s,â€ said the writer while putting â€œCorcovadoâ€ from â€œGetz / Gilbertoâ€, the famous 1964 album with Joao Gilberto. “The way his lyricism matches Brazilian music is something you won’t find anywhere else.”

In the shadow of his spectacular and extensive musical career, Getz continued to suffer from alcoholism and drug addiction throughout his life.

â€œMusic is there as an independent life form in itself,â€ Murakami said. “He keeps evolving even though he lives with such a messed up host.”

The last vinyl to play was “First Song” from a 1991 live performance, in which Getz entertained audiences with opulent tones despite his cancer. Three months later, he died at the age of 64.

Murakami concluded the event by reading aloud his afterword to the biography he translated.

â€œThe essence of Getz’s music is its lyricism,â€ one passage reads. â€œIt’s a deep lyrical spirit that goes beyond sentimentality. Yet this is only one side of the coin. A ruthless demon hides silently, and inevitably, behind this beautiful spirit.

Murakami’s afterword continues, â€œLight and darkness, the bright and the shadowy – you can never choose any of them of your own accord. It is not for you, but for them, to choose. And true beauty is something that inevitably embraces such a dangerous origin at its root. “