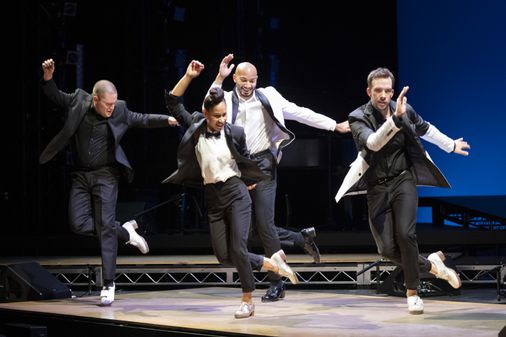 CAMBRIDGE – It starts with a bang. On tracks recorded by Arturo O’Farrill’s Afro Latin Jazz Orchestra â€œScalularâ€, five tappers in trench coats and t-shirts bearing their first initials hammer an insinuating rhythm. They change position, slide over each other on ramps and platforms as if to say hello; they seem to dance in unison even when they are not. For the first time since the start of the COVID-19 pandemic, live performances are back at the Loeb Drama Center at the American Repertory Theater.

The show is “Ayodele Casel: Chasing Magic”, but Casel, now 46, has spent her tap dancing career not only chasing magic, but creating and sharing it. Born in the Bronx, the daughter of a black father and a Puerto Rican mother, she was the first woman to join Savion Glover’s Not Your Ordinary Tappers. She became the face of the faucet; this summer, the USPS honored her by putting her on a Forever postage stamp.

â€œChasing Magicâ€ was originally scheduled to be a concert at Joe’s Pub in New York City in March 2020. COVID-19 has put an end to that idea. Then it became part of the Joyce Theater 2020-21 virtual season, a film that was shot on Joyce’s stage last March and offered for three weeks in April.

Now the show, run by Casel’s wife Torya Beard, is making its debut as a 70-minute live event (no intermission). Like the film, the show takes place in chapters. “Gratitude” finds Casel doing an “improvisation” with the musicians: pianist Anibal Cesar Cruz, singer Crystal Monee Hall, percussionist Keisel JimÃ©nez. It’s a sort of confined tap; energy is all in the feet. She introduces Hall, who leads the audience in a sing-along number called “Love Song,” concluding, “We’re ready to take this on the road!”

“Friendship” has Casel in duet with Anthony Morigerato on “Fly Me to the Moon”. They exchange ideas relaxed and in a good mood; it is light, it is on the ground, and yet with its blazing towers, it is he who will make them take off. â€œJoyâ€ is a quartet for Casel, Morigerato, John Manzari and Kurt Csolak; set to the recording of O’Farrill’s “Caravan”, it’s so rhythmically contagious that you might be tempted to get up and join them. “Inspiration” pays homage to Casel’s love for the films of Fred Astaire and Ginger Rogers, as she and Morigerato duet on “Cheek to Cheek”.

â€œThe Sandboxâ€ is an â€œimprovisationâ€ between Casel and O’Farrill on the piano. “I have no idea where he’s going to go,” she said, “and that’s okay.” File this under “Trust”. O’Farrill goes all over the place, sometimes teasing, sometimes intense, changing the pace, and Casel stays with him. â€œLegacyâ€ begins with Hall singing â€œI Will Speak Your Nameâ€, and it turns into a three-time fraternity number singing for Casel, Naomi Funaki and Amanda Castro. After a solo by JimÃ©nez, we move on to â€œCulture,â€ where, for â€œBomba II,â€ a barefoot Castro in a swirling white skirt seems almost possessed as she dances up to a storm. This leads to â€œAncestorsâ€, where in â€œMeeting Place: Draft IIâ€, without music but the tapping, Castro’s movement is integrated with that of Casel, Morigerato, Manzari, Csolak and (via video) Ronald K. Brown. Connecting the tap to the African American roots of the form, this is the highlight of â€œChasing Magicâ€.

After another JimÃ©nez solo, the show ends with “The Magic”, in which O’Farrill returns to the piano and the performers are reintroduced and there is an informal scrum. It is an intimate and community affair. Sometimes I would have liked the dance to be more expansive, but there’s no denying that the performers’ phenomenal endurance and virtuosity – or their joy. “Deep inside you,” Casel said, “is a tap dancer waiting to be born.” If you didn’t feel that way when you walked into “Chasing Magic”, you might just as well be on your way out.

Presented by the American Repertory Theater. At the Loeb Drama Center, Cambridge, until October 9. Tickets from $ 25 to $ 70. 617-547-8300, www.americanrepertorytheater.org

Jeffrey Gantz can be contacted at [email protected]