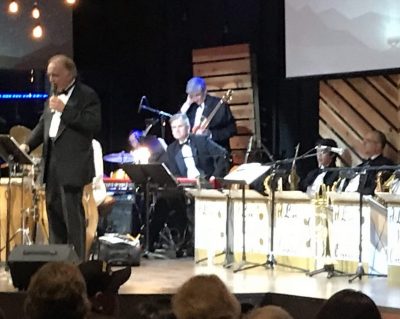 This weekend, the Nut Tree Plaza will sound a lot like the Chicago song “Saturday in the Park.”

As in, there will be people dancing, laughing and more, well, Saturday.

More importantly, there will be a group that will not sing Italian but mostly American songs. Alive Music Orchestra is next on the list for the Nut Tree Plaza summer concert series this season.

For more than 30 years, the 22-piece band have performed numerous concerts throughout the region, and this Saturday they will captivate Nut Tree audiences with their renditions of songs dating from the big band era to jazz more contemporary. rock standards.

Yes, this song from Chicago is on the setlist.

Lead singer Frank Salamone said the band was the brainchild of musician Keith Stout, who wanted to create a big band in the style of the Tommy Dorsey Orchestra.

“He wanted a place where musicians could come together,” he said. “It was just a dream for him to start it, and we went hard.”

Alive Music Orchestra came to life, so to speak, in the 80s. Stout eventually moved to Texas, but the band lives on with more than 20 performers, including three lead singers: Salamone, his daughter Leah Walker, and Stout’s niece. , Britt.

Salamone has a lifelong interest in music, which has led him to sing with the Los Angeles Civic Light Opera, perform in musicals and play in bands. He received a Bachelor of Music from California State University, Northridge and a Master of Divinity from Golden Gate Baptist Theological Seminary, which earned him the pastor of Cornerstone Baptist Church in Dixon.

“Music has been part of my life since I was young,” he said. “It’s just a fun pastime now, and it’s a time when we can come together and bring joy into people’s lives when they come to listen to music and have a good time at our gigs.

Salamone loves the ability of music to “reach and touch or even souls, our emotions”.

Salamone’s favorite songs to perform come from mid-20th century performers such as Dean Martin and Frank Sinatra, including brassy standards such as “Ain’t That a Kick in the Head”, “Come Fly with Me” and “New York, New York”. ”

The band also enjoy performing songs by contemporary crooner Michael Buble, including his versions of “Sway” and “Save the Last Dance for Me.”

“They always seem to strike a chord with people,” Salamone said of Sinatra and Buble’s take on repertoire. “People love their music, and as a result, when I’m able to sing their music, people seem to really, really enjoy it.”

Alive Music Orchestra’s set also extends to rock and pop songs such as Huey Lewis & the News’ “The Power of Love” and Chicago’s “Does Anybody Really Know What Time it is” and “Saturday in the Park”. , the latter of which Salamone performs in a duet with Walker.

“We have a well-rounded repertoire that appeals to a lot of people,” he said. “It’s been part of the band’s success over the years.”

Salamone said the show should be relaxing and fun and provide respite from the heat.

“They can come and expect to be entertained, come to relax, enjoy the music and forget about all the worries for a while and let the music take them away,” he said.

Nut Tree’s last concert of the season will be Brette Alana and the Steve Krohn Band on July 9th.

Why dance music is popular during recessions