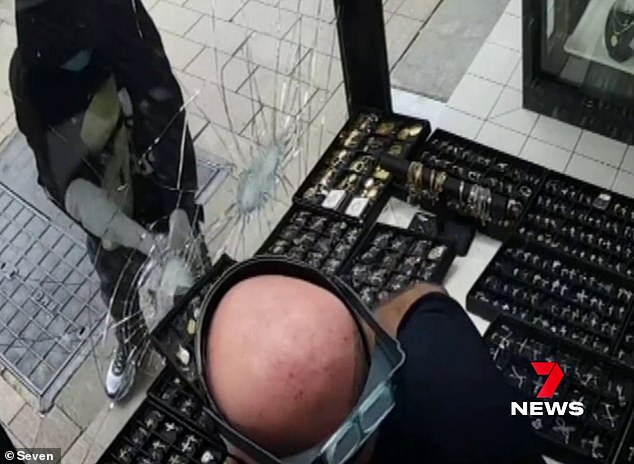 Brazen thieves use a HAMMER to smash the window of a jewelry store in the middle of the day before stealing $1,000 in jewelry and fleeing in a Honda Jazz

A family-run jewelery store has been left to pick up the pieces after brazen thieves smashed their shop window midday and stole thousands of pieces of jewellery.

George Konstantinidis, the owner of Konstan Jewelery on Marrickville Road in Dulwich Hill, says he and his family were shocked by the burglary.

In dramatic CCTV footage of the robbery in daylight, two men in dark hoodies begin to aggressively pound against the windows with sledgehammers.

In dramatic CCTV footage of the robbery in daylight, two men in dark hoodies begin to aggressively pound against the windows with sledgehammers (pictured)

The couple arrived at the Inner West store around 1.30pm on Tuesday and quickly got to work using hammers and their feet to access the precious jewellery.

Startled pedestrians are seen fleeing the footpath as several witnesses drive past in their cars, but the reckless thieves remain focused on their task.

At one point in the footage, Mr. Konstantinidis appears from inside the store, but despite his protests, the pair continue to knock on the window.

The couple were later captured rushing towards a gray Honda Jazz with another passenger inside, with police saying the offenders are still at large.

The jeweler believes the pair got away with tens of thousands of their wares and said he initially thought the crash of the hammers was thunder.

Mr Konstantinidis acknowledged that everyone had suffered during the Covid-19 pandemic and said he had struggled to pay the rent.

Startled pedestrians are seen fleeing the footpath as several witnesses drive by in their cars during the cheeky midday robbery (pictured, the Dulwich Hill Jewelery)

“At the end of the day, we’re very lucky that nobody got hurt, which is the main achievement,” he said. 7NEWS.

“People probably at night, they will sometimes try to do things but never in broad daylight.”

A NSW Police spokesman said officers were called to the jewelry store around 1.30pm after reports of a break and enter.

“Officers attached to Inner West Police Area Command have established a crime scene and are investigating the circumstances surrounding the incident,” the spokesperson said.

“No injuries were reported.”