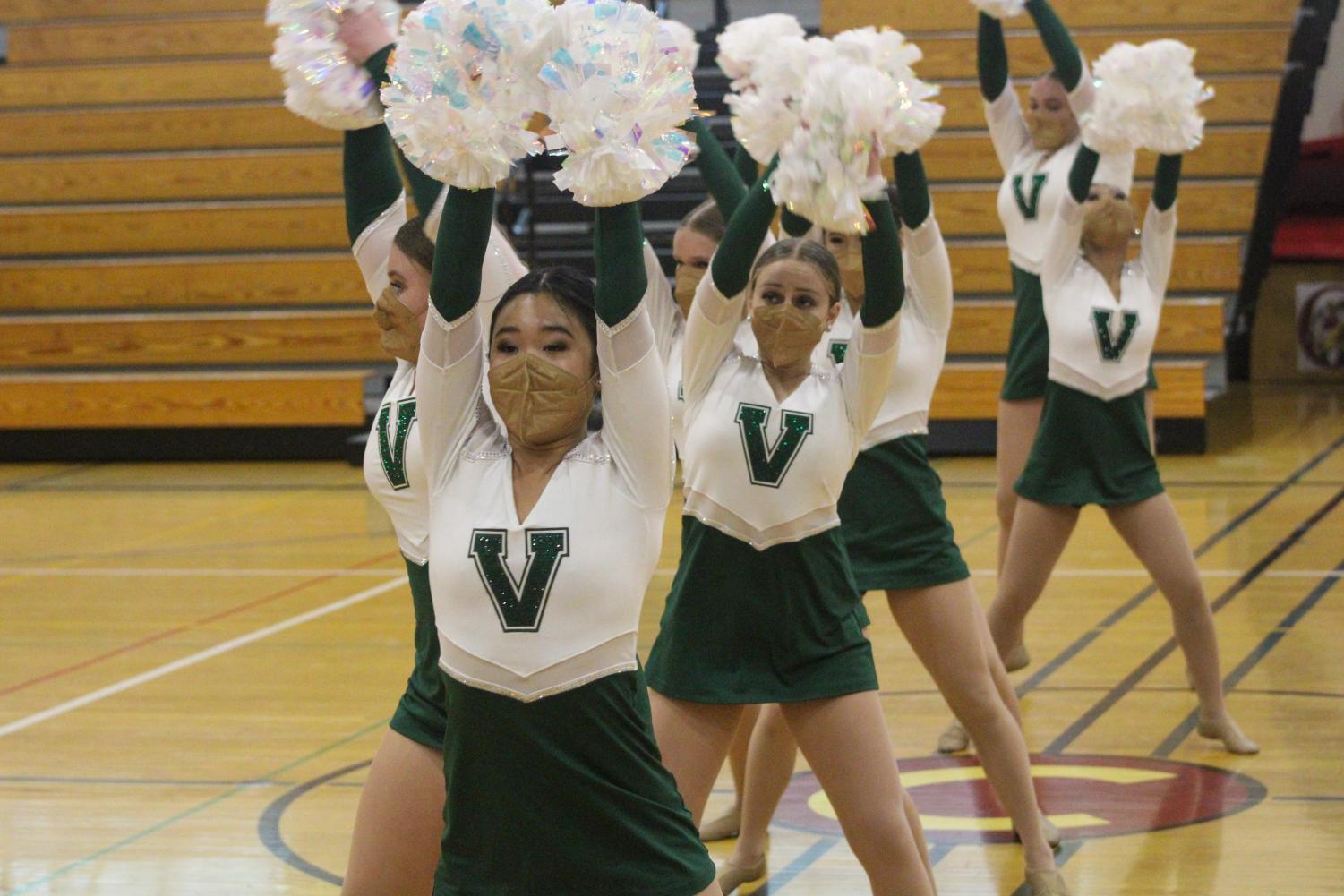 Dancers lift second Rachel Ho during the dance team’s contemporary piece “Favorite Crime” in the X-Small category. In its final competition before nationals, the Palo Alto High School Dance Team placed fourth out of eight teams in the category, winning a trophy in Saturday’s Festival of Champions competition at Cupertino High School. “It was really great to see X-Small place,” Ho said. “None of the scores were super surprising, and hopefully that gives us some insight on how to move forward to Nationals.” (Photo: Sofie Zalatimo)

The team received an award for their contemporary piece in the X-Small category, which primarily encompasses contemporary-style routines with five or fewer dancers. Paly placed fourth out of eight teams, which junior dancer Anna Hagan said was exciting given the strong routines of the competing schools.

“I am quite happy with the results of [the] competition,” Hagan said. “We got fourth place in X-Small, which is amazing because there were some really good teams competing against us in that category.”

The team also participated in a Dance Pom routine using pom poms with sharp jazz moves as well as a Disney-themed musical theater routine in the Character category. Despite winning a trophy in the X-Small category, Paly placed last out of four teams in the Dance Pom category and fifth out of six teams in the Character category, both of which fell below the threshold for a price. Coach Alanna Williamson said she was disappointed the team’s Pom and Character routines didn’t win awards.

“I feel confused about the scoring in a lot of ways, mostly because sometimes we really and clearly perform and perform the routine better than the previous competition, but our score goes down,” Williamson said.

Hagan said the character’s dance was a challenge this season, but she said she was proud of the team’s improvement in this competition.

“We also got better with our character piece, which was good to hear since we struggled with this one due to the judges not really understanding it,” Hagan said.

With the team planning to attend the Nationals later this month in Anaheim, Williamson said the team plans to change the choreography for the character’s piece in hopes of scoring higher.

“Right now the only dance we’re feeling a bit worried about how it will score [at Nationals] is our character dance, but we hope to work with an outside choreographer to redo pieces of it,” Williamson said. “Whatever, it’s our funniest piece for sure, and I’m so proud of how they [the dancers] executed him.

Paly attended regionals earlier this month and, according to Williamson, the contemporary piece X-Small qualified for the more competitive championship division at nationals by passing a score of 85.5 out of 100 points.

“This is our team’s first time reaching the Championship Division, which means we’ll have the honor of performing with the best of the best dancers,” Williamson said. “Our Pom routine will be in the Open Division, which means we have a better chance of winning first place. [award]. I feel like if they [the dancers] continuing to work hard on the feedback we’ve received is a real possibility.

After an all-virtual year, the team took on the challenge of learning to dance consistently again, according to sophomore dancer Rachel Ho.

“We’ve been very focused on forming correctly or cleaning up different arms and heads so that we can look the same and dance cohesively,” Ho said.

Ho said she was proud of her team’s success throughout the competitive season given the challenge of returning to an in-person environment.

“I’ve been really pleasantly surprised by the team’s performance this season,” Ho said. full range of motion, it was so nice to get back into the studio and fall into a much more normal routine.”

Ho said she hopes nationals will allow her to learn from a wider range of dancers and teams.

“I think a personal goal for the Nationals will be to try to learn and observe as much as possible from other teams outside of the Bay Area,” Ho said. “I think it’s easy to satisfied with focusing on the inside, but I think overlooking the value that different dancers bring is a big mistake when it comes to improving and evolving your own dance style.”