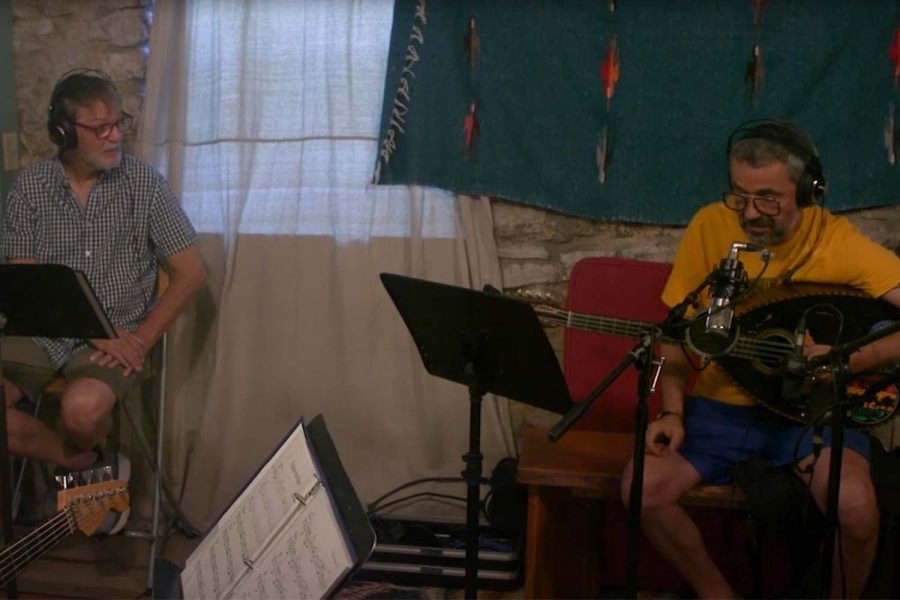 Esteban and the Children of the Sun brought lively music, spoken word and history to the Englert Theater

Esteban and the Children of the Sun is a multimedia production that tells a story hidden from history at the Englert Theater, the story of Esteban d’Azemmour.

History is often seen through a very particular prism, that of the privileged. Stories are often altered to fit the narrative of those in power, or the stories are lost in the ruthless hand of time. In recent years, these stories have started to reveal themselves through different artistic mediums.

People lined up on East Washington Street on Sunday afternoon to hear such a story; that of Esteban d’Azemmour, a 16th century Moroccan who was the first documented African man to travel through North American lands.

Esteban and the Children of the Sun was conceptualized by John Rapson, a jazz trombonist and composer who led the jazz program at the UI School of Music for 26 years. When Rapson heard about Esteban from Azemmour, he knew that Esteban’s story had to be told and wanted to tell it through different art media.

When Rapson passed away, Trevor Harvey, current director of Htlic media, took on the lead role of the project. Harvey was tasked with creating texts and images for the story, detailing Esteban’s story and providing context for the audience. The images were interpretations of Esteban throughout history – a man with sharp cheekbones, facial hair and earrings. The text was presented in a PowerPoint format, with details taken directly from first-hand accounts, including text from Cabeza de Vaca, one of the travelers on the Esteban expedition.

The text of de Vaca’s recording of their exploration opened the eyes of viewers to Esteban’s story. To accompany Esteban’s tale in Spain and the Spanish colonies, members of Miguel Espinoza’s Flamenco Group performed traditional flamenco music.

Viewers learned that Esteban was from Morocco and in 1527 traveled to North America with his slave owner. Exploration initially began with 600 men and five ships, and slowly declined to 80 men due to skirmishes with the indigenous population, as well as a lack of food, water and shelter. The 80 survivors were enslaved by the indigenous population for five years.

After the crowd heard about this, Caleb “The Negro Artist” Rainey and Kevin Burt spoke of Esteban being enslaved and then helping them escape. They offer a contemporary perspective to the history of Esteban.

Finally, nine years after leaving Spain, Esteban and the other men returned to Mexico City. Soon after, Esteban left on another journey of exploration as a guide for a Spanish brother. They traveled for a while with Esteban scouting and acting as a translator until he reached a Zuni pueblo called Hawikuh. From there, the Spanish brother received a report that Esteban had lost his life.

In order to tell this intense story, Rapson recruited various groups, including a sensational flamenco group from Denver who brought flair to the stage, the Mektoub Arkestra, Iowa City musician Kevin Burt, lyric artist Caleb ” The Negro Artist “Rainey, President of Htlic Media Trevor Harvey and countless other groups who have contributed behind the scenes.

Rainey comes in at four different points in the story to comment on Esteban’s journey in a spoken word format with Kevin Burt. Rainey stars as a contemporary black man commenting on Esteban’s life like someone hearing about it for the first time. To complement the contemporary perspective, Burt takes on the role of an Elder who guides Rainey through this new knowledge, including some topics that are difficult to rationalize.

The combination of Burt and Rainey side by side allowed viewers to step back and reflect. Their performance was incredibly effective and their dialogue had goosebumps in the arms of the spectators.

â€œWe get the commentary of why a slave would help his slave masters, and then we get a nice twist in Esteban’s story in that Esteban’s slave masters also become slaves,” Rainey said. â€œSo Esteban helps them get through slavery, so there’s a complicated feeling there. And of course you’re talking about two contemporary black men who have a lot of feelings about it. “

In addition to lyrics and images, Esteban’s story was enhanced by music. The musicians of the story were commissioned to create music in the styles that represented the places found in Esteban’s story. The music was catchy and transported the viewer to another country at another time. Musician Tara McGovern detailed the process that was undertaken to honor Esteban’s origins.

â€œEsteban was Moroccan at the start. It was enslaved by the Spanish conquistadors, so there’s the flamenco element woven into it, â€McGovern said. “There is also an element of jazz because our frontman John Rapson was a masterful jazz musician, and we have Kevin Burt’s blues where we all play orchestral parts to back it up.”

McGovern went on to detail how for production she plays the violin. Additionally, the show contains a North African Mongolian performance by Nielo Gaglione.

Ultimately, Esteban and the Children of the Sun is a multimedia production that tells a story that needs to be told. While the show has only had one performance scheduled so far, last Sunday, contributors to the show are hoping to see Esteban and the Children of the Sun as more than one performance, so the world can know the story of one of the first people in the western world to explore North America, who happens to be a black man.

Arlo Parks Comes to Detroit for “Collapsed in Sunbeams” Tour