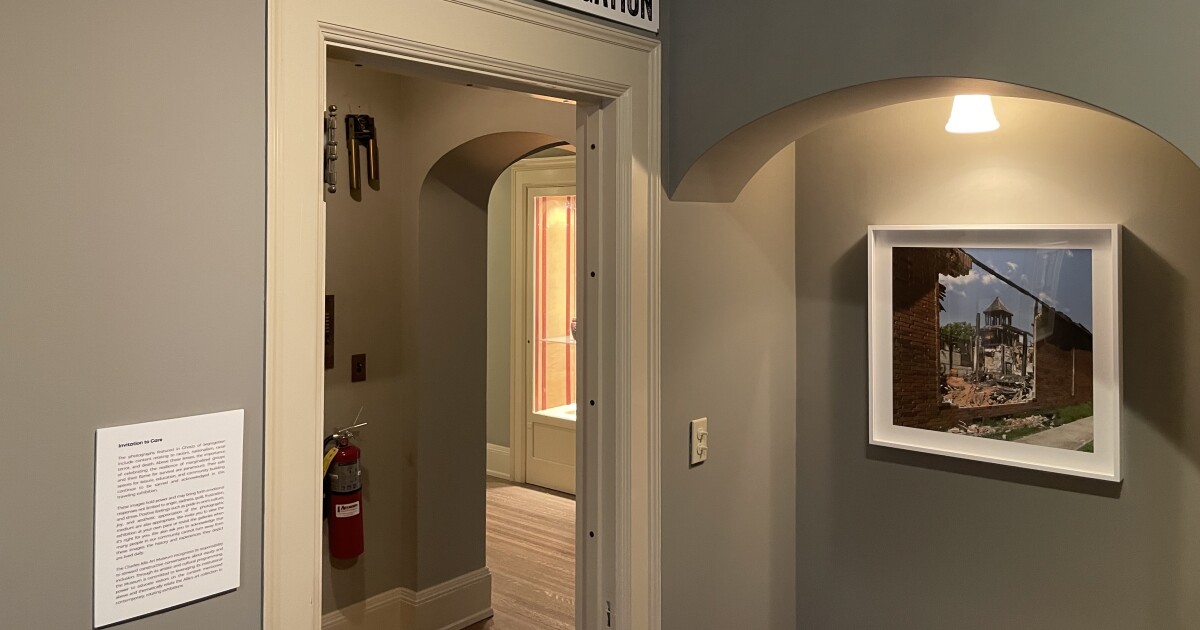 A new art exhibit in Milwaukee, titled “Ghosts of Segregation,” features photos of physical remains from the Jim Crow era. The images depict places like businesses that had separate entrances for black people and areas where people of color have been murdered.

At Charles Allis Art Museum, the historic mansion is now a space where guests can learn about segregation in America. The exhibition features the photography of Richard Frishman.

Dozens of images decorate the walls of the mansion, each accompanied by a description that provides historical information. The larger photo of the Great Hall shows the exterior of an ice cream shop in Pascagoula, Mississippi, taken in 2018. Two people of color place an order in the front of the building.

“We see to the right that there’s a window, and there’s also a figure inside that window,” Brown said. “This window used to be where people of color had to order their meals on the side of the building. They weren’t allowed to order from the front, and then they had to wait for white customers to finish ordering before they left. the command has been executed.”

Although the photos eschew graphic content, Brown said seeing the exhibit can be an intense experience. For example, when people see and read about the Mount Pleasant Baptist Church in Louisiana.

In 2019, it was the third predominantly black church burned down in two weeks in acts of hatred by the same arsonist.

The intense themes are why areas like the great room and living room have been revamped for people to decompress and reflect. There is also a comment box for visitors.

Brown said guests shared their thoughts on the history and continuation of racism. She read a visitor’s comment:

“Brutal,” wrote the visitor. “This story makes me think about how normalized segregation was and in many ways how separate we still are. Of course, there are no mandates people can use entries on, but look our legal system. Look at the race profile of so many corporations and boards. Look at how many old white men are making our laws. I’m super crazy about it.

Brown’s take-home message from the visitor is that they are very aware of how systematic racism still exists.

Frishman said the segregated histories of buildings like the ice cream shop are often camouflaged. During his research, he saw a familiar place: The Paramount Theater in Clarksdale, Mississippi. He had passed the building several times, but had never noticed the old entrance reserved for people of color. It still meanders around the back of the brick building.

“For me, it was an escape route, and for most people who see it, that’s what they think,” he said. “That’s what so many of these images represent. Our history, for better or for worse, is often depicted around us in physical ways. But we’re not keen enough to realize it.”

Brown pointed to a photo of a former jazz club in Chicago, which was particularly popular in the 1920s and 1940s. The building now operates as a beauty salon, but its history as the Grand Terrace Café can be seen in the original jazz-themed mural inside the store.

“I think this photograph is really interesting because it’s literally an image that points to a very strong inclusive story of jazz musicians being welcomed into a space,” she said. “Now it’s just a store. I think Rich understood very well what a barber shop looks like in a black community with different items for sale. The mural kind of fell apart.”

Frishman said he was inspired to start taking pictures of the “ghosts of segregation” after the 2016 presidential election.

“It was the election that got me thinking about what it means to live in America,” he said. “My nostalgia for when I grew up represented a really privileged view of the world.”

Frishman added that photographing the sites is one of his ongoing efforts to learn about other peoples and cultures.

“Even if I try, it’s still limited. I need to talk to people who have had other experiences than me.”

He hopes people will leave the exhibit with a new perspective on how to understand the hardships others endure.

Frishman will host a free virtual artist talk on September 8. A Zoom link will be posted on the Museum’s website, charlesallis.org.

From Feimster to Mummenschanz, UConn’s Jorgensen Center is preparing a full program for the fall – Hartford Courant