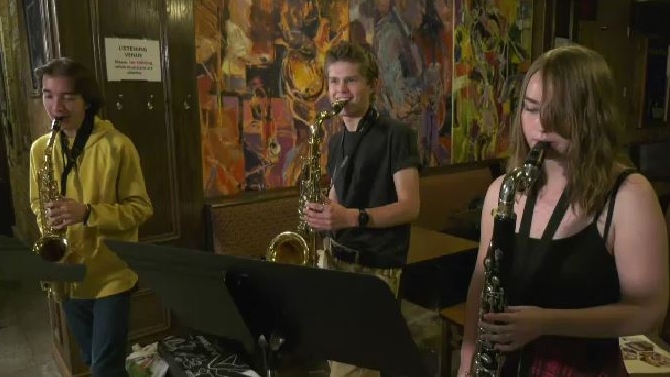 “It really made me a better musician”: young talents on stage at the Uptown Waterloo Jazz Festival

The Uptown Waterloo Jazz Festival kicks off on Friday, and after two years of pandemic cancellations, it’s back to its traditional format.

A showcase for young musical talent in our community is also back.

Wolfegang Baird, tenor saxophonist, is one of the few students to perform with the Youth Jazz Ensemble.

“I really like improvisation and collaboration,” he says. “It’s really about joining other people and just having ideas, and bouncing them off of each other.”

The event, a tradition of the festival, puts young talents in the spotlight.

Their rehearsals, he adds, typically focus on rhythm, improvisation and group skills, such as handing out solos to the next performer.

“So things that can be done more on intuition and less on studying a bit of theory and that kind of stuff,” says White.

This fluidity of jazz also appealed to Keira MacDonald, who is a classically trained musician.

“I always knew there had to be certain notes in a certain placement, so when I listened to jazz and realized things that weren’t right sounded right, I wanted to know. more,” she said.

“It really made me a better musician, even though I was only here two weeks.”

The Youth Jazz Ensemble will perform on the main stage Friday and Saturday beginning at 2 p.m.

“I’m nervous because I haven’t played in the last two years,” MacDonald said.

“Having that crowd and that atmosphere, it really changes the way you play and it’s really amazing to have that energy,” Baird said.

It’s unclear where these talented performers will turn up next.

“Our goal is to raise young musical leaders, many of whom in this workshop go on to study jazz or classical music at universities.”