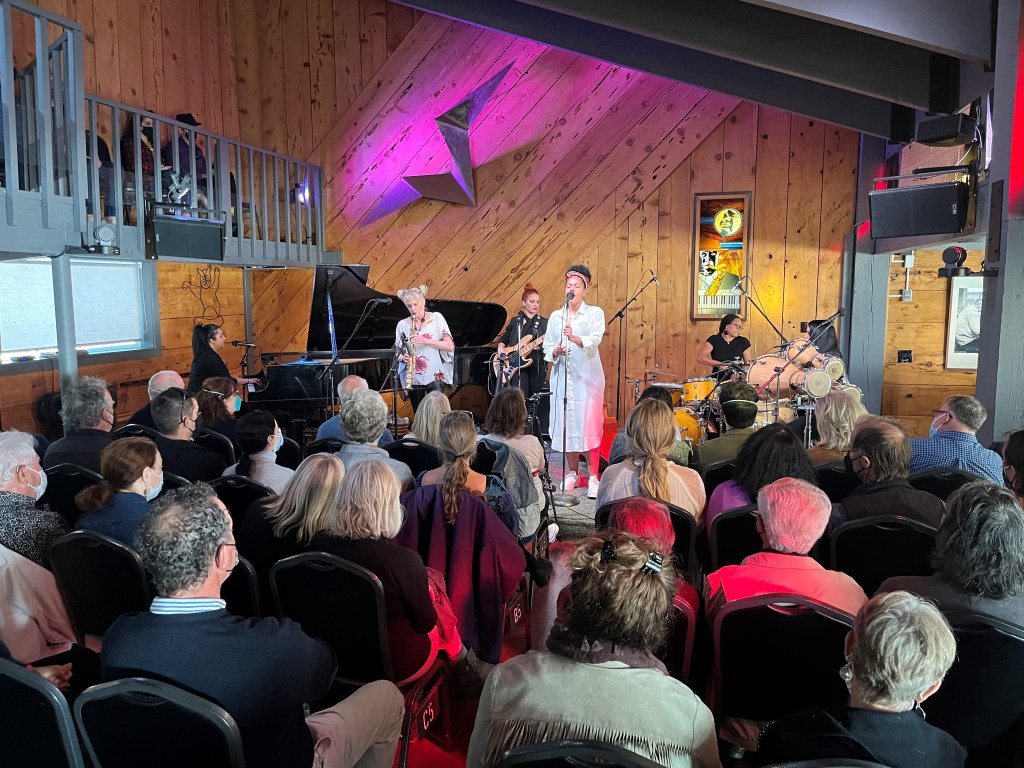 Welcome to the Bay Area Bucket List, where readers suggest things to do around the bay, and we go out and investigate them. Have an idea of ​​something to explore or a question you want answered? Send it to us!

Today, reader Lawrence asks us to visit the Bach Dancing & Dynamite Society in Half Moon Bay for “world-class live jazz on Sunday afternoons”.

Obviously, the most remarkable thing about the company is its history – and ongoing! – role in attracting massive musical talent like Art Blakey, Etta James, Bill Evans and the Kronos Quartet, as well as fostering a tight-knit community of jazz lovers in charming Half Moon Bay.

The second most notable thing has to be its unusual name, literally related to explosives. Pete Douglas, the company’s late founder, told the story this way:

The name originated from an informal party in 1963. A small group of friends were hanging out one Sunday afternoon at my original oceanfront bistro, Ebb Tide Cafe. While drinking and listening to recorded music, other people came across dynamite. They suggested we all go out and blast it on the beach. (After we) declined their offer, the blasters let us do their thing. While waiting for a return to the party and the music: In a change of mood, I put on my recording of Bach Brandenberg’s Concerti. After listening for a while, someone suggested the music was in 4/4 – why not dance to it! That’s what we were doing, dancing a form of West Coast Swing to Bach, when we heard an explosion on the beach. Intoxicated guest Bob Swift, upon hearing the explosion, claimed we were the Bach Dancing & Dynamite Society.

Douglas’s daughter, Barbara Riching, who took the reins as president and creative director of the company, remembers growing up in this wild atmosphere. “In the 1960s, people usually got away with stuff,” she says. “The (local) population was probably a third of what it is today. Also, on the coast, there were just a lot of crazy people living there. It attracted people who didn’t fit in or conform to other places.

One such maverick was a man named Pat Britt, who became a well-known saxophonist in the Los Angeles area. Now, Douglas wasn’t a musician himself—he just grew up in the Big Band days and loved the whole West Coast scene—but he was a probation officer. Britt was on probation for stealing nonsense from a grocery store, so maybe it was natural for them to meet. What wasn’t so expected was that the pair formed a bond that helped transform Douglas’ beach house into a star-powered jazz club.

“Pat lived on the peninsula and was related to a lot of local jazz musicians, so a lot of (what followed) stemmed from that relationship, early on,” says Riching. “Then jazz had a renaissance in the late 70s and there were a lot of musicians coming through San Francisco. My father always did Sunday afternoons. It’s a small niche where we capture musicians on tour. They would come and play at a club in San Francisco and then Sunday afternoon they could be free.

As the Douglas children sat and tried to do their homework, a cavalcade of jazz musicians passed by to perform or hang out and play records – Dexter Gordon, Stan Getz, Betty Carter, McCoy Tyner. Joe Locke, a famous vibraphonist, stayed for the night several times (but was nice enough not to stop the kids from banging on his instrument).

“What makes it special is the confluence of the atmosphere and the beauty of the ocean combined with the way my dad created the concert hall,” says Riching. “The stage is specially designed not to be so high, so it might be harder to see, but it feels like you’re in a living room with the musicians. It’s a very intimate experience.

I visited the club on a recent Sunday to see Jane Bunnett and Maqueque, an all-female Afro-Cuban band with a killer drummer and vocalist. The wind was blowing from the Pacific like a banshee, but inside, the acoustics of the elegant cedar-panelled room were perfect. Some guests brought their own bottles — in fact, it’s encouraged — and glasses of wine and beer and a light dinner were served in adjoining rooms. (Some nights there are also food trucks.)

“My dad thought about it before everyone started doing this stuff — the picnic, the wine,” says Riching. “It’s supposed to be more of a social outing. And in the end, you experience this wonderful thing and it rejuvenates you for the week.

So, to sum up: two jazz-hands up. And for those who want to spend the night, there is Half Moon Bay to explore. Upscale restaurant Pasta Moon stands out for its homemade pastas, such as butternut-mascarpone ravioli with sage and amaretti or manila clam linguine with pancetta and braised leeks.

La Costanera is a great, if a bit pricey, option for contemporary Peruvian cuisine from acclaimed Bay Area chef Carlos Altamirano. For a cheaper bite, try the Lamas food truck which is usually in the parking lot behind La Costanera. It draws lines for traditional Peruvian/Mexican offerings and plentiful ceviche.

Then there’s the sturdy Half Moon Bay Brewing Company located so close to the water you can hear the seals fighting each other. The pub food is solid and the chefs blacken an excellent fish sandwich. And fans of California’s finest vegetable, the artichoke, will find it grilled or beer-battered in portions large enough to satisfy the Jolly Green Giant.

If you are going to

Llamas: Check out the food truck menu at www.lamasperuvianfood.com.

For more Bay Area travel coverage
follow us on Flipboard.

Got a great idea to explore?

Want to vote on the next set of possibilities? You can find the survey here.