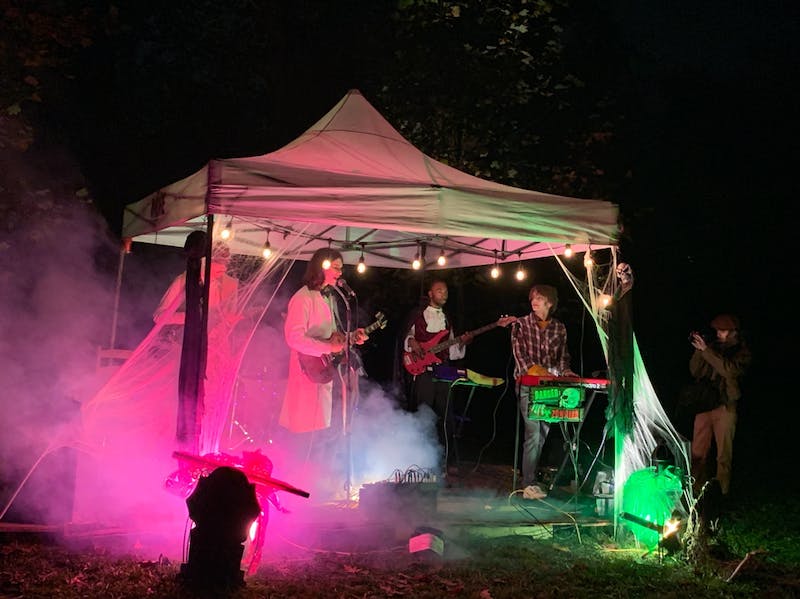 The group reunited, oddly enough, on a “sad homecoming” using the Baltimore subway. Chang and Byrd, who were in the same year at the Baltimore School for the Arts, were looking to record something after playing with different ideas at school. Yuhas and Hogan, who are a year younger than the other members, were also frequent metro users. As if by magic, the group came together after the members’ interactions during their commute to work.

Deja Vu gained ground in his rise to local fame after performing concerts at music festivals and small events. Much of its followers come from high school ties between private and public schools in the city of Baltimore. After a successful run in 2019, the group, like many others, saw their efforts halted by the pandemic. For a while, Deja Vu was unable to perform live performances in front of an audience, that is, until vaccine availability increased earlier this year.

The outdoor show took place in Sabina Mattfeldt, a neighborhood in northern Baltimore, just off the city-county line. The group provided a lighted path from Main Street to their spooky tent, which definitely set a Halloween vibe.

The stage was well lit with green and purple lights and was also decorated with cobwebs, skulls and hanging lamps. The band members, who were all in disguise, performed their original music and classic Halloween covers like “Thriller” and “Monster Mash”.

What makes Deja Vu special is the different background music offered by each member. Chang spoke with The News-Letter, breaking down the musical influence of each member.

“We all bring a different kind of spice to the table,” he said. “So, for example, I’m really passionate about jazz. All my training is in jazz. Leo – his training is a bit bluegrass and folk with the mandolin. Elek is a very big guitarist. He loves Bruce Springsteen, loves the Beatles. And with Graham, it’s a bit the same. They love to play rock and grunge. Roy’el makes his own music and he plays with R&B sounds.

The extent of Deja Vu’s musical directionality was clearly demonstrated by the range of sounds in the limbs’ performances. Chang was versatile with the keys and the synthesizer, not afraid to jump from one instrument to another. During some songs he even started playing the trumpet. Hickman also switched from the mandolin to the double bass. Their ability to include all of these instruments in one show was truly remarkable, and for those unfamiliar with music production or live music, it can be very revealing.

Not only was I captivated by Deja Vu’s energetic performance, but as an audience member and native of Baltimore, I was luckily drawn into a larger sense of community. I looked around the crowd and saw many familiar faces from high school and even college. Relatives and friends of friends showed up to support Deja Vu, and in some ways it was a reunion of old and new people in the group.

While recent advances in immunization have allowed the group to perform in front of a live audience, a new challenge has arisen for the five members: distance. Hickman, Chang and Byrd have all graduated from high school and are continuing their education outside of the Baltimore area, while Yuhas and Hogan, who are currently high school students, are busy applying to college.

Yuhas spoke with The News-Letter where he sees the future of the group heading.

“We are planning to release an EP soon with the help of Roy’el – he has experience on some streaming platforms, so he will help us put it together maybe even in the next week,” he said. he declared.

Hogan also shared his vision for the group in an interview with The News-Letter.

“Actually we’ve all been busy in the band, Elek and I had to apply for college admission, but I really love these guys and love playing with them. It’s very special and I hope we can continue with that, ”he said.

Despite the distance that could affect the future of the group, the members are still eager to find the time to train and reunite. With the support of his community and his willingness to make music, Deja Vu continues to impress.

Cooking Jazz at the Santa Fe School of Cooking | Music