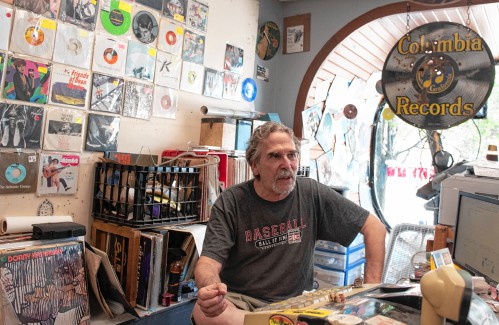 EASTHAMPTON — Five decades ago, when David Witthaus was 15, he was hanging out at his local record store in New York. But one Friday, the owner kicked him out of the store at 5 p.m.

Witthaus was puzzled, asking why. The owner told him he couldn’t find anyone to work at the time, so Witthaus found the answer on the spot: “Hire me. It was Witthaus’ first job at a record store — he lied and said he was 16 so he could take the gig — and he hasn’t looked back since.

Now the owner of his own record store, Platterpus Records in Easthampton, Witthaus, 65, has seen the recording industry evolve for many years. He bought the years-old business on September 1, 1982, meaning this year marks 40 years since Platterpus Records opened its doors in Westfield. The building has been located in Easthampton at 28 Cottage St. for 12 years.

“I don’t really feel like I’ve been to work yet,” he joked one recent afternoon, sitting at his usual perch behind the store counter. Stacks of records, tapes and CDs lay around him.

Platterpus is the only store of its type in Easthampton, occupying a prominent place in the town centre. Witthaus said he was happy to be in the city, where business is brisk.

“A lot of people come here,” he said. “Now we just have to figure out where to put the cars.”

Over the years, the recording industry has changed considerably. Gone are the days when new releases drew crowds to their local record store to buy brand new records. These days, Platterpus deals exclusively in used records, selling mostly classic rock, but with a sizable collection of vinyl ranging from jazz to blues.

When asked why the vinyl record has such staying power, Witthaus said “playing a record is an event”. To play one, someone has to put it on the turntable and turn it over after about 20 minutes. They can’t dance or the disc will skip, but they can hear the rich sounds these discs contain and experience the ornately decorated packaging – an art form that has been lost in the age of streaming, he said. declared.

Listening to other mediums like CDs, Witthaus said, just isn’t the same. It sounds like background music instead of the main event, he said.

“I don’t really listen” when a CD plays, he says. “It’s just there because the silence is awkward.”

Those who entered Platterpus on a recent visit were greeted at the front with rock and roll classics from artists like Neil Young, Steely Dan and Dire Straits. The walls are covered with posters praising similar artists, from Pink Floyd to Tom Waits.

These posters were once a big part of Witthaus’ business. Before coming to Easthampton, but after leaving Westfield, he spent two years at the Hampshire Mall – an experience he describes as his “transition years”. Due to its proximity to nearby colleges, it sold a lot of band posters and t-shirts.

Witthaus prefers to sell music, and that’s mostly what he does now. He certainly has his own musical tastes — he loves blues music, he said, and has no interest in learning about any brand new music emerging on the scene. But he said he hates record stores that push certain types of music on their customers.

“It’s not my job to tell people what to listen to,” he said.

No one ever got rich running an independent record store, Witthaus said. But he’s had his share of big sales over the years, from the incredible punk collection someone in town once sold him to the bizarre records he never realized would make so much money.

In one case, an elderly woman sold Witthaus 10 boxes of her mother’s old records, most of which he disliked. They sat on the store floor for a long time until one day he decided to play one that had a white jacket with no tags on it. It contained a booklet of an art exhibition, but he didn’t recognize the sounds coming from the turntable: two people talking to each other.

So Witthaus launched the record online and only checked his bid just before the auction closed on the record, which sold for $895. The recording turned out to be an interview with legendary artist Andy Warhol, and was only released the day this museum opened.

It’s these kinds of stories, and the thrill of offering customers something new, that makes Witthaus work. He said that when he started feeling useless or disliking the job, he would decide to quit. But now he has no such plans. He will continue to sell popular records to people who come looking for good music.

Dusty Christensen can be contacted at [email protected]