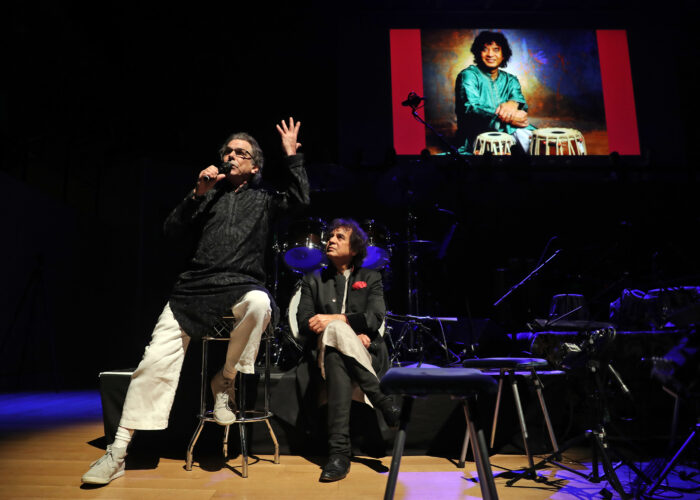 Maybe it was the acid. Or maybe the full moon gave them away. Some details have been lost in the fog of time, but there’s no doubt that Mickey Hart and Bobby Weir’s first sonic adventure in 1967, breaking into the San Francisco Zoo to record the animals, quickly fell through.

Carrying with them a Nagra mono recorder borrowed from Owsley “Bear” Stanley, the legendary sound engineer and underground chemist of the Grateful Dead—who may have also provided the LSD—they got tangled up climbing the zoo fence. Before they got inside, “we were stopped by the guards and rudely kicked out,” Hart recalled in a recent interview with The Chronicle, still sounding disappointed that he couldn’t save the gibbons.

Some 55 years and countless concerts later, the Grateful Dead alumni reunite again on Sunday, May 1 for a doubleheader at Stanford University’s Frost Amphitheater, a venue that features prominently in the Dead story. Hart and tabla maestro Zakir Hussain have reunited their Grammy Award-winning ensemble Planet Drum for the first time in 15 years in anticipation of a new album this summer, featuring Puerto Rican percussionist great Giovanni Hidalgo and master of the Nigerian talking drum Sikiru Adepoju.

“It’s basically a trance band,” he said. “It’s trance jazz with a backbeat, like the Dead.”

Weir comes to Frost with an equally large but more geographically focused agenda. In 2018, he founded Bobby Weir & Wolf Bros, his quartet with bassist and Blue Note Records boss Don Was, drummer Jay Lane and keyboardist Jeff Chimenti. All of these musicians have deep ties to jazz, as do the musicians of Wolfpack, a string and brass quintet that Weir added several months ago.

In expanding his set of lupins, Weir said he seeks to cover the full spectrum of American music, “from early country and blues roots to current pop,” he told The Chronicle in a E-mail. “It’s all part of a bigger picture. Long years of experience have taught me that if I’m looking for musicians who can navigate between all these idioms, jazzbos will probably be the first place to look.

Like Planet Drum’s satellite players, the Wolfpack includes some of the Bay Area’s finest improvisers, including Grammy Award-winning violinist Mads Tolling, reed expert Sheldon Brown, and trombonist Adam Theis, founder and guiding force of the Jazz Mafia collective. Joining an already well-stocked combo requires a good idea of ​​how and where to contribute.

“Sometimes our job is to be felt more than heard,” Theis said. “We realize that a lot of the music we play isn’t traditionally built around brass and strings, so in general we’re less clunky when designing our arrangements than we would be in a jazz band. or funk. ”

At the same time, the Wolfpack can come forward to deliver a prime moment, like Theis’ note-for-note arrangement of Jerry Garcia’s solo from “Lost Sailor,” “but flipping it with horns and strings, bringing whole new life to the notes that everyone already loves so much and has heard played many times, but probably only on a guitar,” Theis explained.

Deadheads have no shortage of material to lean on for flashbacks. The Grateful Dead played Frost Amphitheater 14 times from 1982 to 1989, a streak that ended when rowdy behavior was largely attributed to a new wave of fans garnered by the band’s only Top 40 hit, “Touch of Grey” from 1987, led to Stanford and UC Berkeley banning the group.

“We loved this place until they kicked us out,” Hart said. “But I heard they rebuilt it and it’s supposed to be beautiful. We return to the scene of the crimes. I’ll go back there to find some of the old brain cells I left there.