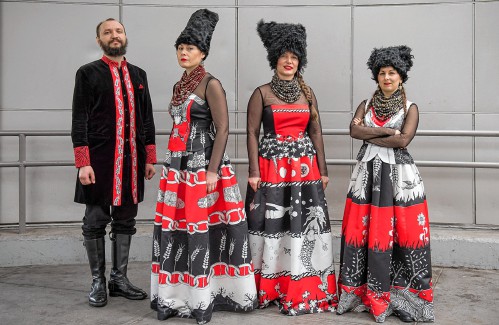 The visibility of the Ukraine-Russia war may have faded somewhat on the world stage in recent months as the conflict has settled into an attrition phase, with other news , such as a long series of weather-related disasters, attracting attention.

But for members of DakhaBrakha, a Ukrainian band with a devoted following at home and abroad, the destruction Russia has unleashed in their country since its invasion in February still looms large in their lives.

Now DakhaBrakha, whose name translates to ‘give/take’ in Old Ukrainian, will make an appearance in the Valley as part of Millpond Live, the free concert series held at Millside Park in Easthampton which is dedicated to a wide range of music, from world-beat funk to Latin to just about everything in between – including “ethno-chaos” which DakhaBrakha specializes in.

Produced by Laudable Productions of Easthampton, Millpond Live, now in its seventh season, takes place on consecutive weekends, September 9 and 10 and September 16 and 17, from 6 p.m. to 10 p.m. Doors open for picnicking at 5 p.m., and although the concerts are free, donations are encouraged.

Due to ongoing concerns over COVID-19, attendance will be closely monitored and attendees are required to pre-book seats at concerts of their choice, which can be done by visiting millpond.live. Face masks are optional.

Each night of the series will feature three bands, and there will be an emphasis on movement at all shows, according to Laudable.

“The lineup is a total dance festival…that’s what everyone needs right now,” Edo Mor, one of the concerts’ main organizers, said in an email. “We wanted this season of Millpond Live to be particularly optimistic, as we put aside worries about the pandemic and look to the future.”

DakhaBrakha, which occurs on September 16, is an integral part of this atmosphere. The four-member group, founded in 2004, mixes traditional Ukrainian folk music with sounds from around the world: Indian, Arab, African, Russian and Australian.

From Indian tabla to Australian didgeridoo, the group integrates a multitude of instruments, including trombone, piano, cello, accordion and various percussions, all prepared to make the public dance.

“We love their sound,” he added, “and the visual projections during their set create a deeper experience for the listener that we think is perfect for Millside Park.”

Indeed, DakhaBrakha – made up of three women and one man who have ties to avant-garde theater in Kyiv – have performed for years in costume, with a range of theatrical settings. But this year, they’ve taken on a wider mission as their country’s cultural ambassadors: their sets can now include images of the destruction in Ukraine, and they’ve called on the public to help support the country.

Dakha Brakha could not be reached for comment. But in an interview earlier this year, member Iryna Kovalenko, who left Ukraine with her family for Seattle five years ago for fear of Russian aggression, said she was in Ukraine in February when the bombs started falling. She made a harrowing escape from Kyiv to Hungary and was forced to cross the border on foot, she said.

In another interview earlier this year, Kovalenko told PBS that the group’s message to the public these days, especially during a long series of shows in the United States, focuses on the fight for the survival of his country: “Ukraine as a country has a place on this earth to exist.”

Russia’s attack, she said, “is genocide against Ukrainians.”

Kovalenko says his band will continue to do what they can to help and keep the war in the public eye: “I believe our songs, our art will be our weapon.”

DakhaBrakha won’t be the only Eastern European band at Millpond Live. Puuluup, an Estonian “neo-zombie-post-folk” duo also performing on September 16, combine the talharpa, a Northern European style of lyre from the Middle Ages, with electronic effects and vocals that can include rap and even an invented language.

Mor says Puuluup, who were recently voted best band at this year’s Estonian music awards, were touring the region at the time – this is the band’s first US tour – and is a natural complement to DahkaBrakha.

“They are Baltic allies of Ukraine and also feel threatened by Russia,” he said. “There is a significant solidarity there that knits the evening together. Inviting the two artists to share a poster is a way for them to express their unique cultural relevance… and to distinguish themselves from their Russian neighbor.

Steve Pfarrer can be contacted at [email protected]

SFJazz kicks off new season with cathartic performance from Hiromi