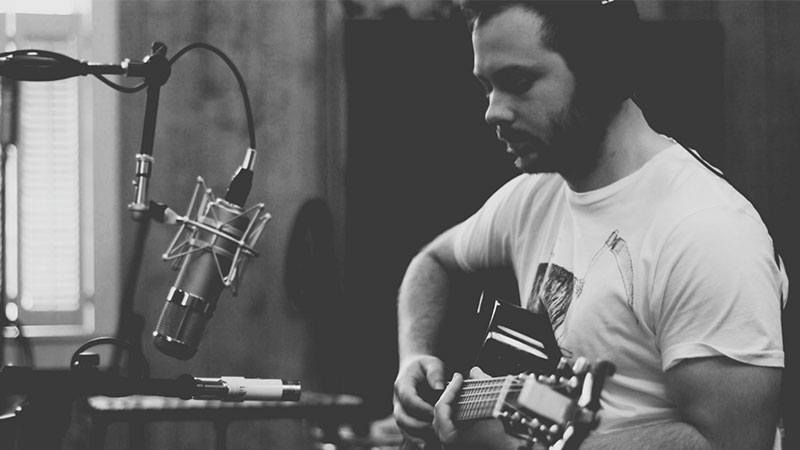 Zack Fletcher is a prolific singer-songwriter / guitarist from Bowling Green, Ohio. The ghosts of his life experience permeate his songs through poetic lyricism, captivating guitar motifs and ethereal melodies. His music has been described as deep, emotional and haunting; a musical catharsis translating into a powerful live performance and an intimate listening experience. His first EP, “Dead Ends”, was originally recorded in 2009 and laid the foundation for his band, Moths in the Attic (MITA).

Moths in the attic
Based in northwest Ohio and trained by Fletcher, MITA released their self-titled debut album in 2019. Fletcher and Michael Williams, a saxophonist he met in college, have started performing together, adding a jazz texture to the acoustic work of Fletcher. Williams merges influences from smooth jazz, R&B and hip-hop. Later, percussionist Kevin Jorrey was added, bringing the energy of a dynamic rock drummer and solidifying the band’s haunting, visceral sound.

Together, the trio merges influences of rock and classical guitar with progressive, folk and jazz notes, creating “ghostly sound compositions”. Since 2016, MITA has performed in various venues across the Midwest, including festivals such as the Black Swamp Arts Festival, and has performed in support of a wide variety of artists such as Tyler Childers, Helmet, Two Tons of Steel and OWEL. With their first tour canceled due to COVID-19, MITA recorded a series of videos, “Songs from a Distance,” following their debut album. Their music can be found on favorite music platforms or on their website: mothsintheattic.com

A new musical exploration
But Fletcher’s role with MITA isn’t his only musical adventure. He also writes and records original solo works.

“The Traveler”, released last July, is the first song in a new collection called Ohio Reveries; songs inspired by Fletcher’s house and the places she took him to. Five new tracks will be released as singles in the second half of 2021 with the full collection to follow. Fletcher’s new release follows his classically inspired acoustic instrumental collection, “Vignettes” (2020), and his previously mentioned alt-folk / rock epic “Moths in the Attic” (2019). The latter received praise from the independent press who described him as “beautiful”, “captivating” and “perfectly executed”. The album was produced independently in his hometown of Bowling Green at DLT Studios and mastered at Jack White’s Third Man Records in Detroit. A portion of all “Moths in the Attic” album sales goes to local affiliates of the National Alliance on Mental Illness.

The songs explore themes of loss and life today, something we all need to remember from time to time. After the sudden passing of several friends and acquaintances, Fletcher was struck by how much these people had been loved and full of life. “The Traveler” reflects on the fragility of life and encourages the listener to be present in the here and now, and to live for those who can no longer be.

Highlighting one of the best singers in the East. – The Waltonian