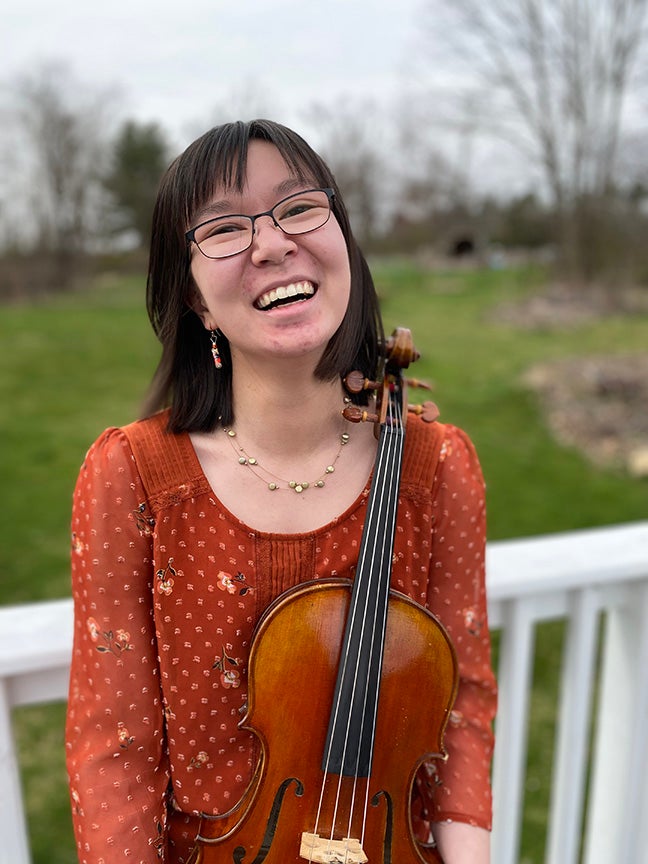 KINGSTON, RI – May 11, 2022 – While still a high school student deciding her academic future, Marisa Jacobs sat in the admissions office of a college of pharmacy at a major East Coast university – one of two top of her list of potential schools — talking about her talents for math and science, her love of writing and art, and her lifelong passion for music, which she planned to pursue in the future. university of his choice.

When the admissions officer informed her that the rigors of the pharmacy program would prevent her from playing viola in the orchestra at this university, she and her father left and walked up the coast a little north to at the University of Rhode Island. Here, she excelled in the College of Pharmacy’s equally rigorous 0-6 Doctor of Pharmacy program, while sharing her love of writing with her fellow students and, yes, playing the viola for six years in the ‘URI Symphony Orchestra.

“I’m so glad I ended up going to URI, and I would choose URI again,” Jacobs said. “URI let me play in the orchestra. Maybe that doesn’t seem like a big deal, but it was a big deal for me. When I came to URI and told someone about it, they were like, “OK, I don’t know if anyone has done this before, but go ahead. Everyone here at URI is so open-minded and willing. Just because it hasn’t been done before doesn’t mean it can’t be done. They gave us the freedom to do things outside of the pharmacy program. Even if the program is very busy, I was still able to do a lot of other things.

In addition to the Symphony Orchestra, Jacobs played viola in the string quartets and even the jazz band, while earning a minor in music. The Poughquag, NY native also worked at the URI Writing Center, helping fellow students polish their term papers and short stories, while becoming an exemplary student at the College of Pharmacy, which she will graduate in May with her Pharm.D. She didn’t always know pharmacy was where she would end up, just that she wanted to do something in the sciences. A summer in her hometown helped her make her decision.

“I always knew I wanted to do something with math and science because those were my strongest subjects, the ones I loved the most,” Jacobs said. “My older sister, Lauren, is a veterinarian. I saw her doing animal science, and I liked it, but I didn’t want to have to slaughter animals. I knew I didn’t want to be a doctor or a nurse. So my mother suggested the pharmacy. I didn’t even really know what they were doing.

But she was intrigued and wanted to know more. So one summer, she spent every afternoon walking down the street to a Hannaford pharmacy, where she stood back and watched how a pharmacy operated.

“Because I was too young to work there, they let me stay there and watch what’s going on,” Jacobs said. “I couldn’t touch anything, I couldn’t do anything, but I was there for a total of 40 hours over the summer, and something about it clicked. After this experience, I started researching pharmacy schools and really considering pharmacy as a career.

The College of Pharmacy’s 0-6 program, which allows students to complete their general education and earn their Pharm.D. in six years without having to apply to a graduate school, attracted her to URI. The plethora of varied opportunities offered by the university — and the support of the College in pursuing them — confirmed her decision.

The expertise she found in her professors at URI further convinced Jacobs that she had made the right choice. She did several clinical rotations during her time at URI, working with several professors, including Erica Estus, “who was the first person I met during my college visit”, Christine Eisenhower and Patrick Kelly . Associate Dean Kelly Orr served as Jacobs’ academic advisor and, in effect, his career advisor.

“Dr. Orr sent me information about medical writing opportunities over the summer, and that’s what I’m going to get into after I graduate,” Jacobs said, noting that she will start working for AdMed Inc., in Philadelphia. “It’s a company that contracts with big pharma to create educational materials to educate pharma reps about the drugs they sell, so they have a better idea of ​​what they’re talking about when they’re talking. with doctors or nurses. It’s kind of like teaching, which is one of the main reasons I love pharmacy, so I’m really excited.

Jacobs said she plans to pursue a college education in the future, hoping to teach pharmacy students at the college level — maybe even back at URI one day. Wherever she ends up, her work in pharmaceutical sciences will be joined by her passions for writing, art and, above all, music.

And yes, she is already researching community orchestras in the Philly area.