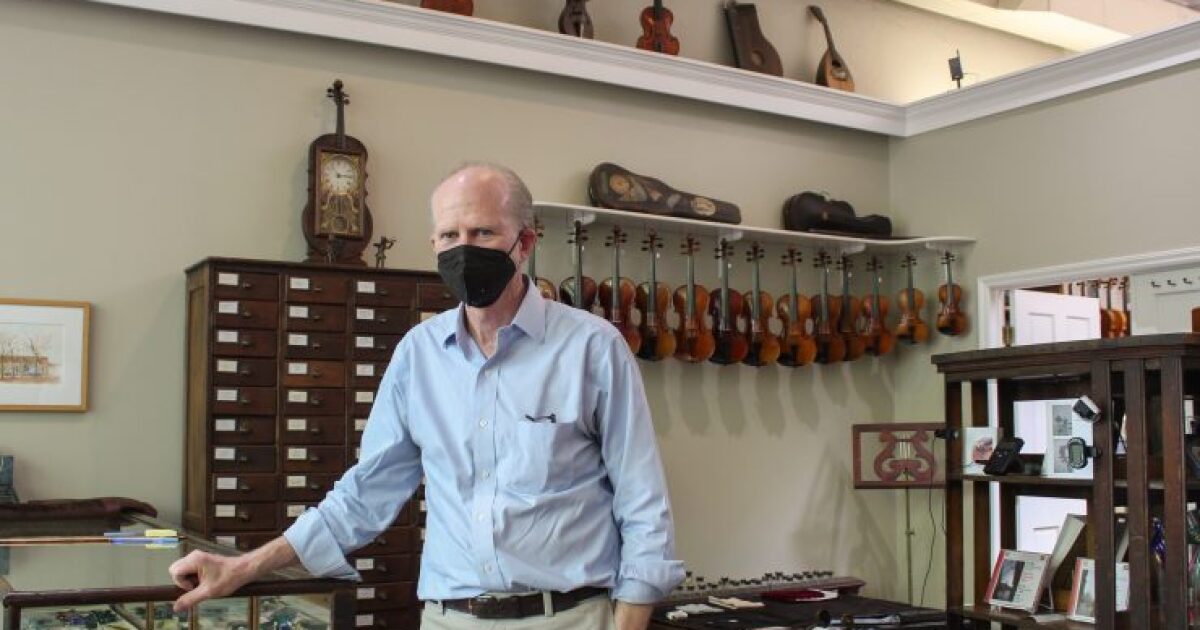 During their regular family walks through downtown Raleigh, something always made the Ferranti boys stop and stare: the large window displays of Montgomery Violins on Hillsborough Street.

They looked inside, where stringed instruments hung in long lines on the walls. Among the shelves of sheet music, folk instruments and violin art are on display.

Alexander Ferranti, 9, and Benjamin Ferranti, 7, love bluegrass music. As soon as they were old enough to hold a violin, they began taking lessons with Swedish-born and now local musician and instructor Jan Johansson. They needed instruments of their own.

The Ferranti parents knew nothing about buying violins, but they did know that Montgomery Violins had a good reputation.

In his shop, John Montgomery and his violins were waiting.

With dozens of violins in his shop, he is a curator of instruments and their owners. Master craftsman and restorer, he preserves the stories and music of century-old violins. And over the past three decades, in his shop, he’s witnessed the magic of matching people with their instruments.

“Each violin has a voice as different as how each human being has a voice.”

To make a match, it has a selection of instruments. He can show the same five violins to several people, and everyone will choose differently.

For Alexander Ferranti, the choice was clear: a 140-year-old Stradivarius model violin, with dark wood. The others he tried just didn’t sound right.

“One of them sounded a bit grumpy,” he said. “All but the one I tried, I didn’t like the way it sounded when I played bluegrass on it.”

Behind the Montgomery Violins cash register, classical music floats out of the studio.

Violins glow in warm hues around the light-flooded shop. Two employees tinker with instruments on workbenches. Tools and even more fiddles hang in neat rows on the walls. In another corner, the unstained wooden body of a cello lies in pieces, waiting to be assembled.

Montgomery is not just a salesman. He also builds stringed instruments – around 100 of them throughout his career, he estimates – and does restorations.

Violins have been around for 450 years, in the same iteration they are played today. Montgomery said he stood on the shoulders of his predecessors who worked in the field for hundreds of years and had a proven track record in techniques, methods and materials.

The unassembled cello is one of Montgomery’s current projects, which he works on between client appointments, restoration work, and day-to-day business operations.

His reputation landed him jobs at the Smithsonian and other positions nationally. He spent 2020 restoring one of Thomas Jefferson’s violins, preparing it for a player to perform contemporary music before putting it on display at Monticello. Soon he will go there to present it.

He also worked on the childhood violins of American composer and conductor John Philip Sousa and Fritz Krietzler, an early 20th-century violinist born in Vienna and moved to New York.

When Montgomery opened the store in its current location in 1987, it was one of the few local stores at the time to offer such specialized, high-quality services.

UNC professor Brent Wissick was one of his first clients in the area. Wissick has taught cello, baroque cello, viola da gamba, and chamber music at UNC since 1982. He specializes in 19th-century music, performing on period instruments – with the help of Montgomery.

In 1984, Montgomery restored for Wissick a cello from the year 1776 as it would have been played at that time.

Around the same time, someone brought an original cello by Venetian luthier Matteo Goffriller to Montgomery’s shop asking him to restore it and sell it. Montgomery made a copy of the instrument for someone else, which caught Wissick’s attention.

So Wissick ordered a copy of this copy.

In his buttery tiger-striped wood, Montgomery carved a rosette. It appears to be hidden behind the fingerboard, but its placement is intentional. Wissick said the old Goffriller’s fingerboard is shorter than the type needed for current developments in the way the cello is played. So John included the rosette in the same place as the original.

Wissick described his sound as “full” and “acoustically powerful”.

“If there’s a rainbow of sound, you want to be able to get the rainbow of sound — the acoustic color spectrum,” Wissick said. “And that’s what an instrument like this allows you to do.”

One day after Wissick’s retirement, when he can no longer play for his personal pleasure, he considers gifting his custom-made instrument to his son, who also plays the cello. But he said they could also choose to sell the instruments. Maybe they would be sold at Montgomery’s shop, or a similar shop.

The first violin Montogmery played was one he found in the attic of an old family home, hidden among old trunks, abandoned sports equipment, and college pennants. He took it to an expert in New York who fixed it. Montgomery would later work on it himself and give it to his younger brother.

Montgomery attended the Violin Making School of America, on the advice of New York luthier and restorer William Monicle, after completing his undergraduate studies at Lawrence University and a two-year scholarship to study folk instruments in France. When Montgomery finished violin school, Monicle offered him a job and taught him how to restore instruments.

Montgomery doesn’t play much anymore, but he says he performs vicariously through his clients, who play all kinds of music, from classical to bluegrass and jazz.

“Whether they’re playing an instrument I built or something I worked on for them,” he said, “or just helping them achieve their goal of playing great music , I derive great satisfaction from it.”

When Montgomery got married and had children, he was looking for a place out of town to raise a family. Through research, he discovered that this area of ​​North Carolina needed the type of services he offers.

This is where he settled and where, three decades later, Alexander and Benjamin Ferranti will find their perfect alliances on the violin.

Split instruments are normally played for two years before the musician passes them. At Montgomery Violins, customers can exchange their oversized instrument for the larger size.

The Stradivarius model that Alexander now plays has been chosen time and time again – about 10 times, by 10 players, since Montgomery received it in his shop in 1990, he estimates. So its sound is maybe more special than other instruments.

“That makes it kind of interesting, that it’s not just one person’s taste,” Montgomery said. “But it’s now a lot of people’s tastes, that they can choose it from others they’ve tried.”

Montgomery said this type of violin comes from a time when playing the violin was a very popular activity for children. Conventional wisdom held that violin lessons were an important part of a good education for children.

Parents ordered violins from the catalogs of department stores, for example, Sears Roebuck. This is probably how this violin came to America from the German workshop where it was produced.

As to how Montgomery got the violin, he doesn’t remember exactly. It was probably one of the many ways he got instruments in his shop: wholesalers, people who find old violins in their attic, or people who just want to sell their instruments.

However he got it, it continually pricks up your ears when Alexander Ferranti plays it. People notice its rich sound.

During a session, five men came on stage with their instruments: banjo, mandolin, guitar, double bass. In the corner, a microphone was lowered for the two fiddlers.

The boys didn’t just follow the men. They handled the busy picking with ease.

As one song ended, an older gentleman sitting in the front row called Erica and Tony Ferranti to ask if they were the parents. They said yes.

“It’s an old German-made violin in the style of an Antonio Stradivari violin,” said Erica Ferranti. “And he’s at least 140 years old.”

When the Stradivarius model becomes too small for Alexander Ferranti, his younger brother Benjamin would like to play it. After that, who knows what other hands it will pass through. Whatever happens, the instrument still has several lifespans within it.