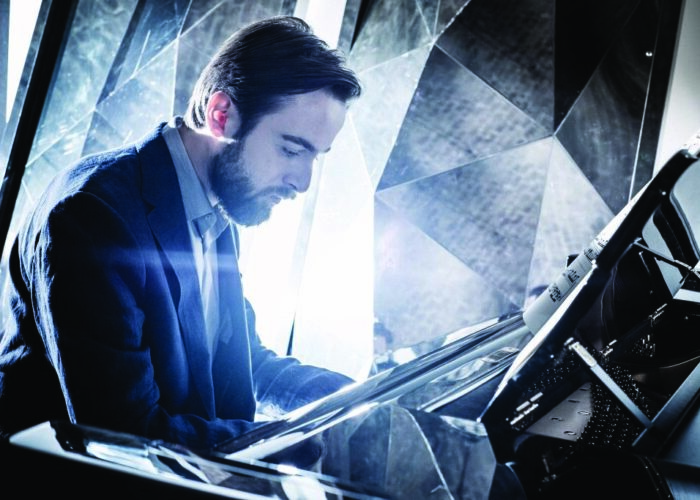 All composers draw inspiration from the music of the past, but they do so in different ways. Some assimilate the voices of their predecessors into a broad territorial embrace; some stretch out on the sofa to make room for a personal dialogue.

Both approaches were showcased – not with equal success – at Davies Symphony Hall on Thursday, June 2, during conductor Ruth Reinhardt’s thrilling debut with the San Francisco Symphony Orchestra.

On one side was “Of Footprints and Light,” a tender, insinuating score by Finnish composer Lotta Wennäkoski, the first and hopefully not the last appearance of her music in a symphonic program. And on the other was the West Coast premiere of Mason Bates’ brutal and boisterous piano concerto, a symphonic co-commission written for the artistry of soloist Daniil Trifonov.

The comparison is not entirely fair, of course. Wennäkoski’s 11-minute work is a meditation on a specific piece of music, an unfinished opera by his little-known Finnish compatriot Ida Moberg. Bates’ three-movement concerto, on the other hand, attempts to address several centuries of classical piano music, spanning from the Renaissance to contemporary times.

But the questions raised by the two plays are still relevant. What do we owe to the great artists of yesteryear in the reorientation of their work? What do they owe us?

One thing that contemporary creators owe to their predecessors is surely to focus attention on the work of the past in a clear and direct way, rather than through second-hand and third-hand translations. I’ve had many complaints about Bates’ concerto — the breadth of its rhythmic language, the almost deliberate poverty of its harmonic palette — but this was the main one.

The piece presents itself as a sort of guided tour through three phases in the history of classical music. The opening movement has echoes of vigorous Renaissance dance music, the middle slow movement mingles with the mood of the Romantic era, and the finale bounces through accents of jazz and minimalism.

Yet the actual sounds of these periods are almost non-existent. Instead, Bates relies on pop music pastiches of the styles in question. The opening movement is less reminiscent of the current Renaissance than the second-tier imitations of 1970s progressive rock bands like Renaissance. The final two moves are classic and modern tropes filtered through the sensibilities of a Disney soundtrack.

The choices here are frankly confusing. Bates, a longtime Bay Area resident who often composes with inventiveness and flair, flattened his distinctive creative voice into a mix of loud and obvious melodies.

There are knocks here and there that remind the listener of more invigorating possibilities – a brief but inspired curtain-raising gesture that whispers of the magic to come, a sudden shift to one meter at seven beats in the middle of the regularity rhythmic. And Trifonov’s performance, by turns delicate and heroic, made the most of the music at every turn.

But the results pale in comparison to Wennäkoski’s beautiful and intricate musical lace. Its 12-minute dreamscape opens with eerie footsteps through a fog, marked with pristine perfection. When the oboe arrives with the first melodic quote from Moberg’s forgotten score, the effect is like a twinkling spectral visitation dawning.

Reinhardt, an American conductor who has held positions with the Dallas Symphony Orchestra and the Los Angeles Philharmonic Orchestra, conducted the two new works with evident assurance. But it was after the intermission, in a vibrant and beautifully crafted recitation of Dvorák’s Fifth Symphony, that she really showed what she could do.

In particular, Reinhardt achieved mighty success in one of the main challenges with Dvorák – how to retain his distinctly dark and heavy orchestral colors without letting the rhythms bog down. In the two exterior moves in particular, the textures looked sensibly rich, but Reinhardt’s sleek, physical catwalk manner shook things up elegantly.