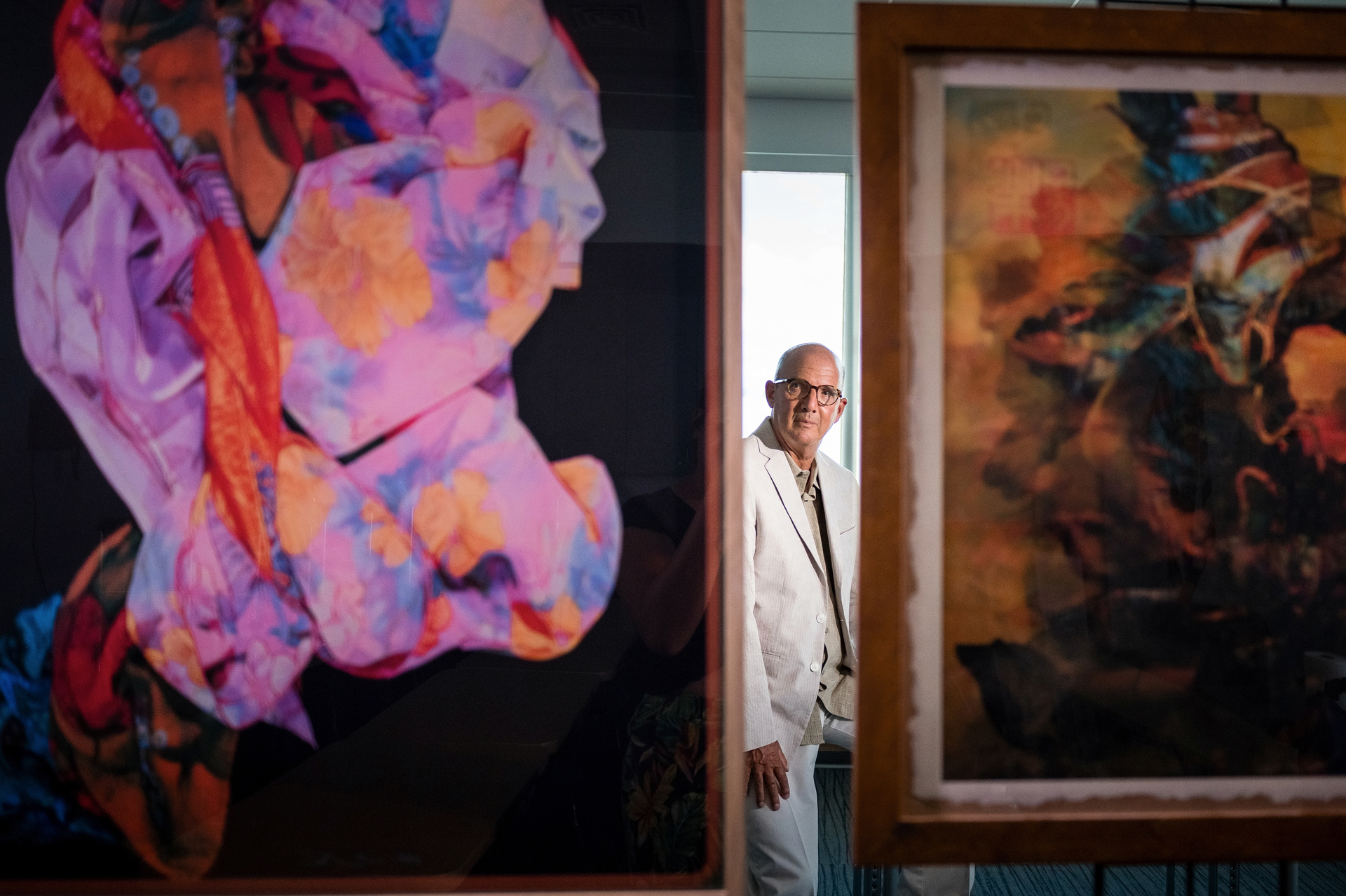 It’s hard not to be distracted on my drive to Marco Island. Verdant mangroves and shimmering waters appear dramatically, their cool palette enlivened by hints of orange hibiscus and birds of paradise. The colors remind me of the prismatic works of Robert Eder, the artist Marco whom I will meet.

A few minutes later, I pull up outside Eder’s studio and am surprised to meet a man dressed head to toe in neutral tones. “I’m the dullest person you’ve ever seen. Even my own work would be way too colorful for me,” he jokes. Eder combines digital photography and collage, primarily depicting kaleidoscopic patterned scarves that, when flowing and folded together, allude to enigmatic, lyrical faces and figures. “I’m as Gemini as a Gemini can be,” he adds, referring to the opposing sensibilities within his personality. He leads me into a tidy, nondescript workspace with lively samba and bossa nova playing above.

Eder suggests that we collaborate on a piece – the best way to understand his artistry and process. He asks me to select scarves from a nearby basket overflowing with colorful silks and motions me to a thick piece of foam covered in black felt, where I am responsible for arranging the fabrics. Eder, who has also been a teacher for most of his adult life, watches me work with a patience honed by years of looking over students’ shoulders. The room is quiet, with the exception of “The Girl From Ipanema” by Astrud Gilberto. Once I’ve finished my composition, he lifts the felt-covered moss, lays it on the floor, and, standing on a stool, begins photographing the thumbnail seen from above, my involvement having long since ended. From there, the process only becomes more layered.

All of Eder’s chromatic digital pieces begin as our impromptu collaboration. After arranging and photographing the scarves, he uploads the images, selects the best photo and manipulates it, using Photoshop to add new patterns and colors so that the scarves become a different entity.

While he currently focuses on digital art, the foundations of the South Bend, Indiana transplant are more analog. He spent most of his life producing large-scale abstract oil paintings, influenced by post-war abstract expressionist painters like Jasper Johns. Early in his career, he painted backdrops as a muralist for Walt Disney World Resort at the EPCOT theme park, then as a set designer in New York City, where he also worked as an art teacher in East Harlem for 16 years and created a gallery.

He started tinkering with digital cameras in the late 90s to document his paintings. In 2000 he realized that the camera could be more than a tool. He had just moved to Marco for the first time and had fallen in love with fishing. For about five years, Eder worked on a series of black and white fish drawings, which he photographed and edited in a primitive version of Photoshop. Sometimes he printed an image on a canvas and painted on it. He moved away for a few years and upon his return he also began documenting the local flora and fauna – a formative step towards his current digital photography and collage work..

After Hurricane Irma, he found himself in need of more subjects. “All the flowers I had photographed were washed away or destroyed,” he says. One day, while doing an oil change, he wandered into a local thrift store to pass the time and was drawn to an array of floral and other decorative patterned scarves. “As soon as I saw the scarves, I knew what to do,” he says.

Eder had been fascinated by kimonos since his teenage years, drawn to the Asian artwork his parents hung on the walls of their home. Later, in San Francisco in the 1970s, he took a course in Japanese and Chinese brush painting which introduced him to wider Asian culture. He learned that kimonos were an art form in their own right. Eder had long wanted to incorporate clothing into his art. “But I was never able to see the details of the kimonos that I could see with scarves,” he says. Colorful silks from the thrift store replaced the lush vegetation he had recently captured and the kimonos that had long captured his imagination.

The brush painting course also piqued Eder’s interest in Eastern religions and their underlying philosophies centered on dualities, as evidenced by the more ubiquitous Yin and Yang. As he points to various related prints hanging behind him, Eder’s beige sleeve tugs and he tugs it to reveal an old tattoo on his arm of two intertwined koi fish. “One is orange and the other green,” he says. “They represent balance, the harmony of opposing forces.” These ideas, prevalent in his works, still resonate with him, a man filled with dichotomies – from oil painting and jazz to digital art technology; from a lowly khaki-clad high school teacher to a prolific, colorful entertainer.

For Eder, the scarves also looked like another type of clothing: “They looked like the sport coats of Jimi Hendrix and Johnny Cash. Eder reveals that he’s also a jazz percussionist – a detail that should have been evident by the way his fingers tap unconsciously in rhythm to the music that fills the room. Although he stopped performing a few years ago, he has been an avid musician since high school. he took ethnomusicology classes in college and ran a record store outside of Asheville, North Carolina in the mid-2000s. Eder’s musical training permeates his visual art – as a jazz player riffing on the spot, he creates in an improvised way. “It’s about getting into a zone,” he says. “I really don’t know which way I’m going, but hours will pass once I get there.”

It enters its flow state when editing its images. Leaning against his computer desk, he scrolls through some shots and lifts the screen of his DSLR to show me the photos of the scarves I had arranged. Against the dark matte background, the shadows of the fabrics are washed out, appearing one-dimensional, like wallpaper. “They’re flat like a pancake, and yet they have volume,” he says. Working in Photoshop, he can select all pixels of a single color and sharpen them by adjusting saturation or contrast, making it more vivid; or, it will import different background images and references, pasting new patterns around the scarves thumbnail. These initial changes crescendo into hundreds of increasingly dramatic adjustments, and it never repeats the same steps or formulas. “If I come across something that worked before, it’s not the same honesty,” he says. “I don’t want my works to look mechanical.”

The final image is a far cry from the original, with new textured backgrounds, an increased color palette, and, occasionally, faux feathered edges. In it, the silky fabric of the scarves seems to bend and relax into faces or shapes, hinting at a profile or a gesturing body below. In some rooms you might recognize echoes of Greek mythology, English literature and Mother Nature. One, which primarily features a lavender-colored scarf, is titled Altobased on the female protagonist of Shakespeare twelfth night. Dark, eerie blues contrast with neon snippets in Colossuswhose scarves twist to resemble thunder, reflecting ancient Greek The Colossus, Francisco Goya’s famous painting of a giant, and the towering cloud formations that roll over the gulf during summer storms. “That’s where my head is at this time,” Eder says of his myriad references. “I give them code names when I work on them, often the songs I listen to. From there, I could continue developing on that basis, or just come back to it later.

And, unlike most digital prints, which can be reprinted in infinite editions, Eder’s works are unique pieces. Once he’s printed and signed an image, it’s done – just like a live musical performance, it cannot be repeated.

A few weeks later, Eder comes to meet me in Naples to give me the imprint of our collaboration. He titled it The girl from Ipanema. A pattern on the right edge of the scarves catches my eye. The tiny design – colored a bright green similar to the shades around it on Marco Island – looks like two curved lines joined together, much like her koi fish tattoo. The radiant work may have been a collaboration, but like all his works, The girl from Ipanema is inherently autobiographical.

A violinist from Bengaluru takes fusion music to the world stage