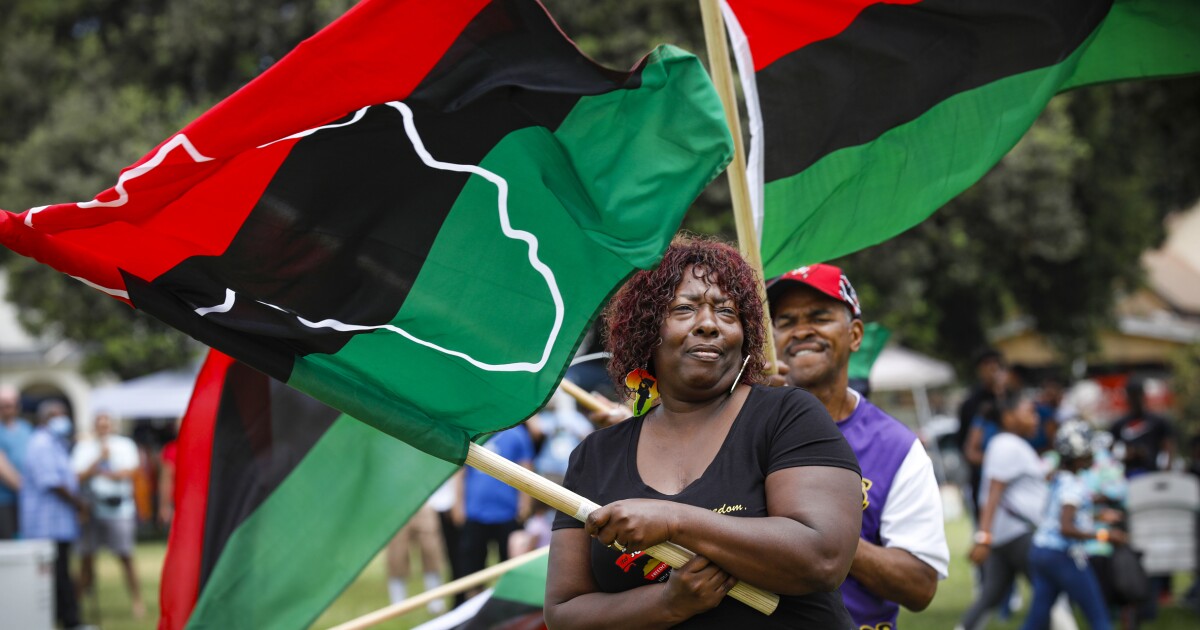 San Diegans will celebrate Juneteenth at events throughout the county

San Diego County prepares for its annual June 19 celebrations, marking the official end of slavery in the United States through festivals, musical performances and a 5K run.

Juneteenth – a portmanteau of the words “June” and “nineteenth” – is considered the oldest African-American holiday observed in the country and celebrates the day the last remaining black slaves of the Confederacy were emancipated.

Although the Emancipation Proclamation to abolish slavery was issued in 1862, it was not until June 19, 1865, that Major General Gordon Granger arrived in Galveston, Texas to announce the end of civil war. It was then – more than two months after the end of the war – that the last slaves were freed, inspiring the June 19 holiday that has been celebrated ever since.

Juneteenth has been observed as a holiday in California since 2017, and President Joe Biden established it as a federal holiday last June.

Here are some ways San Diegans will celebrate Juneteenth this year.

The WorldBeat Center and Major Taylor Cycling Club San Diego will lead a 54-mile Juneteenth Freedom Bike Ride. The event begins at 7:30 a.m., then riders will leave the WorldBeat Center in Balboa Park at 8:15 a.m., traversing Point Loma, Coronado Island, and Imperial Beach. Participating in the bike ride is free, but part of the route includes the Coronado ferry, which costs $7 per person.

The North San Diego County NAACP June 19th Celebration will begin at 10 a.m. in Oceanside with live entertainment, children’s activities, free health checkups, a vaccination station, and a cultural arts exhibit available throughout the day. There will also be vendors selling food, drink, and other handicrafts on site.

The Cooper Family Foundation hosts its Juneteenth Healing the Community Festival from 11 a.m. to 6:30 p.m. at Memorial Park. Although the family’s tradition began decades ago, the official community event was established in 2001, following the death of family patriarch Sidney Cooper Sr., known as the “Mayor of Imperial Avenue”.

Artists 4 Black Live San Diego will spotlight film noir during its Juneteenth Movie Night at Jazz Lounge on El Cajon Boulevard. The film festival will kick off with family entertainment with screenings of “Roger & Hammerstein’s Cinderella” starring Brandy and Whitney Houston, followed by “Black Panther” from 2-6 p.m. At 7 p.m. there will be a screening of “BAPS” with Halle Berry, Natalie Desselle and Martin Landau.

SD Melanin hosts its fourth annual party June 19 for adults 21 and older at the Quartyard in East Village, starting at 3 p.m. There will be a selection of vendors selling items like body care products and clothing, and music will be provided by DJ Prodigee and Mister Hek. Tickets are $20 per person or $250 for a VIP table, which includes admission for five people, reserved seating in the stage area and a server.

Fit, black and educated will hold its third annual celebration on June 19 at Chollas Lake Park beginning at 7 a.m. with the race starting at 7:30 a.m. All runners will receive a drawstring bag, finisher medal, and bib, and the first 50 entrants will receive also a shirt. There will also be a fun 1km run for kids starting at 7:30 a.m. Those who wish to participate in the run virtually can do so any time before the end of the month.

The Mesa Juneteenth and Friends festival will be celebrated as the inaugural Juneteenth event of La Mesa at MacArthur Park from noon to 4 p.m. The Martin Luther King Jr. Commemorative Choir will also perform during the festival