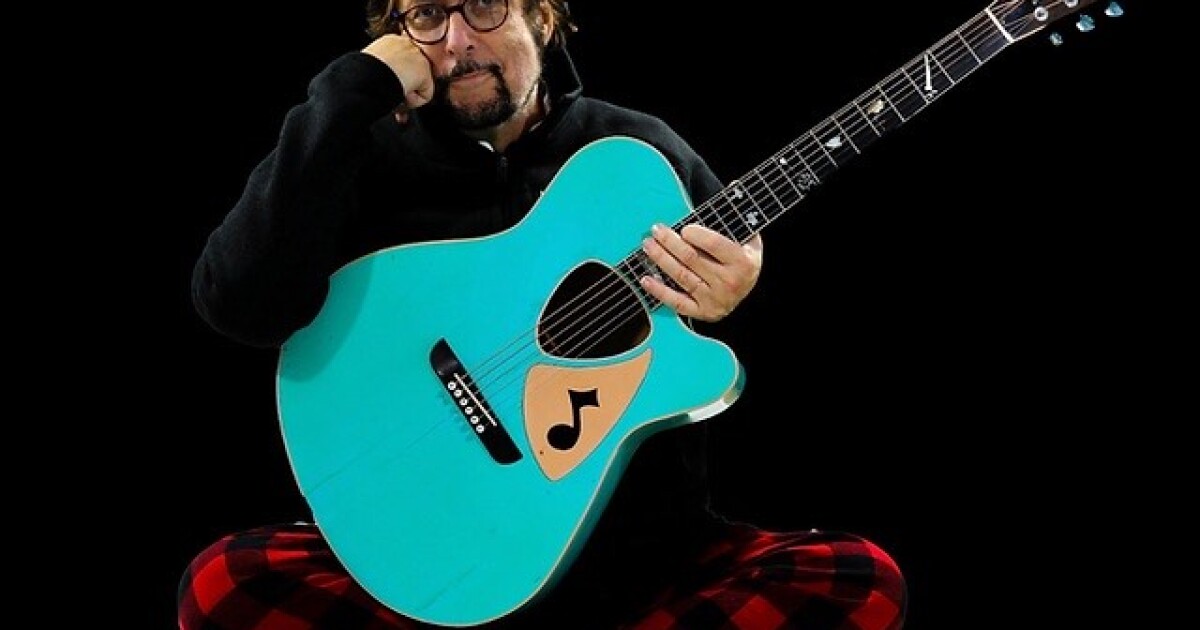 Stephen Bishop looks back on his life in music in ‘On and Off,’ an autobiography with a dramatic twist

It’s no longer surprising that the memoirs of music stars and celebrities contain major revelations, whether it’s Mariah Carey confessing to an extramarital affair with baseball great Derek Jeter or Carlos Santana revealing he was the victim of a sexual assault. child sexual abuse.

San Diego native singer-songwriter Stephen Bishop also makes a major reveal in his new autobiography, “On and Off,” which takes its title from his 1977 hit, “On and On.”

But Bishop – whose songs have been recorded by Art Garfunkel, Barbra Streisand, The Four Tops and dozens of others – takes his time before dropping a sobering bombshell in his otherwise rather windy book.

Indeed, it’s only in the one-page epilogue, titled “2020,” that he pulls the cat out of the bag. Or to be more precise, several cats.

Since March 2020, Bishop writes, he’s suffered nearly a dozen health issues. They started with a late night fall in his bathtub while he was sleepwalking, resulting in a hospital visit and 10 stitches to his head.

A few weeks later, a drug he was taking intoxicated his body. Since then, Bishop continues, “I’ve been in the hospital 10 times for various things” over “a period of almost two years.”

His longest stay was over a month at the start of last year and included two weeks in intensive care, followed by two weeks of private rehabilitation in physical therapy. He lost 50 pounds, he writes, but is “in good health now and has no plans to come back.” The food was awful.

Bishop doesn’t elaborate on why he’s been hospitalized so many times, though he considers himself lucky not to have contracted COVID.

“I hope to return on tour one day,” he wrote. “In the meantime, I’ve finished this book, recorded a new album and have a new documentary about my career waiting for me backstage.”

If all had gone according to plan, Bishop’s book and documentary would have been released in 2019, when a press release announced that both were due for release later that year.

But “On and Off” wasn’t completed until early 2020, just before the pandemic brought life as we know it to a sudden, chilling halt around the world.

It was soon after that Bishop’s health problems began. But readers eager for introspection on life and impending death in “On and Off” will have to look elsewhere.

Now 70, Bishop is a gifted minstrel with a winning knack for crafting nuanced ballads. His best songs feature sweet melody and a warm, conversational voice, and lyrics that can be melancholy one moment, whimsical the next.

“On and Off” also has a warm, conversational tone, so much so that parts read like written transcriptions of recorded reminiscences.

That may be a good thing, given Bishop’s endearing personality, snarky sense of humor, and ability to deftly turn a sentence around.

“One of my paintings was so ugly,” he wrote, “that I called it ‘Ugly Plus’…” If spoken on stage, this quip could be accompanied by a snare drum rim shot.

Recalling an early 1990s event that was also attended by former President Ronald Reagan, Bishop writes, “My first impression of Nancy Reagan was that she had a giant forehead. It reminded me of the Ponderosa on “Bonanza”. ”

Anecdotes like these are part of the understated charm of “On and Off.” This is also one of the book’s flaws, since brief anecdotes dominate its 257 pages — there are 80 numbered anecdotes in all.

Some are memorable. Others are so general they border on the mundane, including reminiscences of Patty Hearst (“a wonderful person who’s been through so much”) and Jane Fonda (“she’s always as nice as can be”).

These anecdotes dominate the parts of “On and Off” that aren’t devoted to… take your pick: a list of artists who recorded Bishop’s songs (three pages); the titles of songs he wrote (seven pages); his handwritten lyrics (nine pages); stand-alone photos (30 pages); and typewritten lyrics (51 pages).

That leaves just over 150 pages for Bishop to ponder and lay out his life. It includes thoughtful and genuinely touching moments about growing up in San Diego, where he faced significant philosophical challenges as the completely unreligious son of a devout Orthodox Christian scientist mother and a a father-in-law not at all pleasant.

The music secured Bishop’s salvation, although some key elements appear to have been omitted from “On and Off”.

He writes of the profound impact the Beatles had on him as a child, after watching the game-changing English band perform on television’s “The Ed Sullivan Show” in 1964. But Bishop does not mention the Fab Four epiphany he had. year here, an experience he enthusiastically recounted in a San Diego Union interview in 1984.

“The first time I heard the Beatles,” he said in this interview, “I was selling newspapers at the corner of 70th and El Cajon Boulevard, where the 5 and 10 cent store was. I heard a bang from someone’s car radio – it was “I want to hold your hand” – and I’ll never forget the feeling that washed over me. felt like I heard something magical.

“In the week, I bought their first album. I took it home and couldn’t stop playing it. I quickly became a real Beatles nut. I traded Beatles cards, got into The Beatles as people, adopted an English accent for a while. I consider myself a staunch heterosexual, but I was looking at pictures of Paul McCartney until my eyes fell. I became John Lennon for about three years as a child.

San Diegan residents will appreciate the many local references Bishop makes in “On and Off,” including his attendance at John Muir Elementary School (he and his classmates referred to him as “John Manure”) and the school Crawford Secondary.

What girls did he have a crush on? Bishop is happy to share their names and some specific details.

He’s also setting the record straight on local urban legend that he had submitted his future hit song, “On and On,” for inclusion on one of radio station KGB’s annual “Homegrown” albums- FM in the early 1970s.

“I didn’t want to give them that song,” Bishop wrote, and he didn’t. He also points out that he refused to change the opening line of “On and On” from “Down in Jamaica” to “Down in La Jolla”, as the KGB implored him to do.

Then and now, Bishop’s art fort has stood squarely, and proudly, in the middle of the road – albeit a road with its share of twists and turns.

He acknowledged this in a 1978 Rolling Stone interview with former San Diego writer Cameron Crowe, saying, “There’s a fine line between what’s hip and what’s not. I like to walk this line.

Alas, Bishop doesn’t immerse himself in his musical craft as much as some readers might like in his self-published, indexless book. He only spends three pages writing about five of his best-known songs, but skimps on lesser-known gems such as “Hall Light” and jazz-tinged “My Clarinet.”

When he writes at length (relatively speaking), as in the book’s four-page opening chapter, with no anecdote, or the four pages he later devotes to his craft as a songwriter, “On and Off” is a captivating read. But the format it uses, in which almost every other chapter is devoted entirely to numbered anecdotes, understates the kind of insightful thinking that would elevate “On and Off.”

For those who want a rather lighthearted overview of Bishop’s career, the book contains enough good words to make a pleasant diversion. Those who want a deeper dive will want and want more.

Why, for example, does it make no mention of its 20th anniversary Crawford High School reunion at SeaWorld?

He described it in a 1989 San Diego Union interview as “a really heavy experience. In fact, I was depressed for about two days. It made me look at my own life, and it was kind of scary.

Or why, to cite another example, was there a nine-year gap between Bishop’s 1980 album, “Red Cab to Manhattan,” and its sequel, 1989’s “Bowling in Paris”?

The answer could be indicative of how music industry machinations and capricious fan tastes can leave an artist who has sold 15 million albums in limbo for such a long time. But Bishop doesn’t really address those issues, although – in a rare instance of finger-pointing – he briefly expresses his frustration regarding one of his former managers.

He Is write about Grammy and Oscar nominations, neither of which resulted in a win. But he says nothing about being voted Best New Male Singer at the 1977 American Music Awards, where his memorable acceptance speech saw him name numerous record labels and executives who had refused to sign him to a contract. It was a memorable “neener neener” moment.

Bishop also makes a brief mention of the beginning of therapy in the 1970s. But he devotes so little space to the subject, just a paragraph, that he need not have bothered.

More contemplation would be welcome in “On and Off,” a light read with some tasty treats sprinkled throughout. But the results argue for a larger book with more personal insights from Bishop.

That may come later this summer when the audio version is scheduled for release. Here is the hope.

“On and Off – An Autobiography” by Stephen Bishop (2022; 257 pages; stephenbishopmech.com)