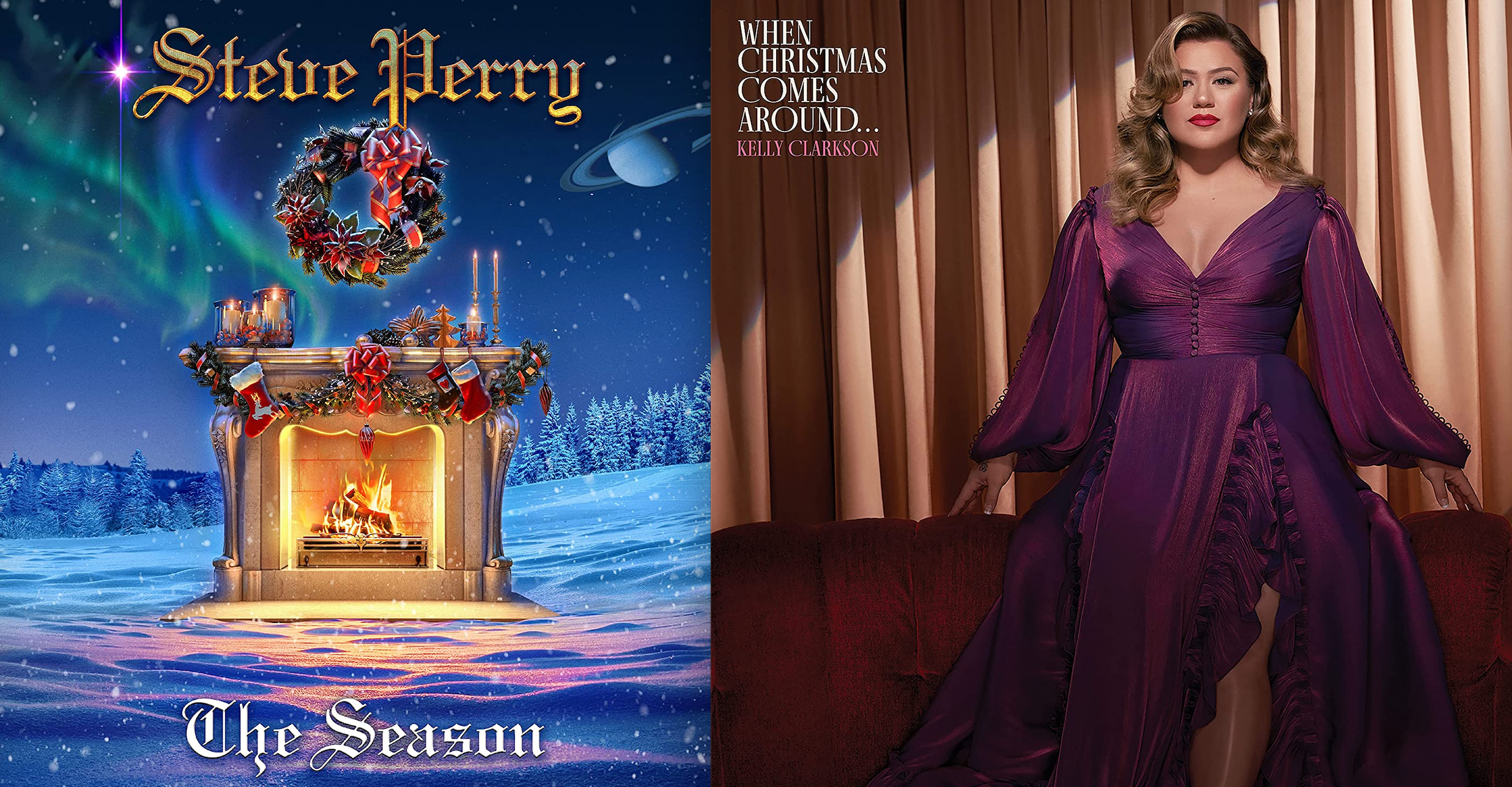 Take back the holiday soundtrack | Music

It’s not just the season to throw parties, have fun and exchange gifts, it’s also the time when we all want to rack our ears at the first bars of “All I Want for Christmas” by Mariah Carey and “Last Christmas” by Wham. ”

Do yourself and all the upcoming holiday dinner guests a favor and don’t ask Alexa to play Christmas music. Organize a playlist of your old favorites and plug in new versions as well. If it’s long enough, you won’t have to rehearse even once a night. Here’s a list of new releases – warning: some feature remastered classics, so organize them accordingly – to fatten up and add variety to your season’s soundtrack:

A sentimental Christmas with Nat King Cole and his friends
Thanks to the wonders of technology, we have a host of new / old music from the master, Nat King Cole, and many other stars still alive. A sentimental Christmas with Nat King Cole and his friends: Cole Classics Revisited includes a number of songs released during the crooner’s lifetime, with the added bonus of special guests. Johnny Mathis exchanges lines with Cole on the opening “Deck The Hall / Joy to the World”. Kristen Chenoweth adds holiday wishes to “The Very Thought of You” and Gloria Estefan joins a duo on “A Nightingale Sang in Berkeley Square”. You may question the decision to resurrect Cole and attach his voice to contemporary singers, but you can’t quibble over the results, especially when the legendary singer is paired with John Legend.

Steve Perry’s season
He’s not dead, but Steve Perry has been away from the music scene most of the time since leaving Journey (twice). It probably whetted the appetites of his fans, but The season probably isn’t the album they were expecting. Perry says he was inspired to make the record based on the songs he heard while his grandmother was making holiday meals, keeping them simple. The discreet accompaniment – piano, drums, strings, acoustic bass – is miles from “Separate Ways” or “Faithfully”. But the vocals, even with a rasp hint, are reminiscent of the glory days of Perry’s arena rock era, and is perfectly suited to this material.

Blackmore’s Night Winter Songs
In another version of rock stars that has become traditional, the remastered and extended Winter Songs by Blackmore’s Night features the guitar maestro of “Smoke on the Water” exploring the sounds of the Renaissance season. Ritchie Blackmore and his wife Candice Night started the band after his final departure from Deep Purple, and among other folk / baroque recordings released Winter Carols in 2006. This version was improved with five additional tracks. The group – a project, really, with the two principals as the only cohesive members – is in great shape. Although he mostly traded his Strat for an acoustic guitar, hurdy-gurdy, mandola, mandolin, and even nyckelharpa (look, I did), Blackmore sometimes releases the electric guitar with a lot of effect. , as in “Hark the Herald Angels Sing / Come All, Faithful. The opening” Coventry Carol “is brand new, or at least their version of this 16th century favorite is. Fine and festive.

L. Shankar’s Christmas from India
If that wasn’t enough of a left turn, then try India Christmas. Celebrated violinist L. Shankar has performed with everyone from Peter Gabriel to U2, Bruce Springsteen to John McLaughlin. It seems that the seasonal rate in the Indian subcontinent mirrors that of the western world, as it adopts the typical holiday rate. A painful intro to “Jingle Bells” suggests that while the tunes may be familiar, the arrangements are hardly traditional, with tabla and violin leading the way. While it includes â€œDeck The Hallsâ€ and â€œO Holy Nightâ€, Shankar also opts for more recent pop classics: â€œAll I Want for Christmas Is Youâ€ by Mariah Carey, â€œDo They Know It’s Christmasâ€ and Wham! by Band Aid. â€œLast Christmasâ€ also appears.

An Unforgettable Christmas from Steve Holy
Country crooner Steve Holy gives listeners his tangy take on holiday music on An unforgettable Christmas, and there are favorites everywhere. “I’ll Be Home for Christmas” is the first Christmas song he learned the lyrics for and the first he recorded for the album. â€œSanta Claus Is Back in Townâ€ is his homage to Elvis, and â€œBringing in a Brand New Yearâ€, originally popularized by blues great Charles Brown, also fits perfectly. Boogie-woogie, do you like it?

Rob Thomas’ Save Some Christmas
Matchbox 20 frontman and occasional Santana singer Rob Thomas updates his “A New York Christmas 21” as part of a set of originals and favorites. Save some Christmas is the title of the album and the single. He gets assists from Brad Paisley and Bebe Winans among others for this set of sweet holiday songs.

When Christmas is Coming by Kelly Clarkson
Kelly Clarkson’s When christmas comes is an ode to the powerful, brassy pop-country sound that she helped popularize. Nowhere is this more apparent than “Rockin ‘Around the Christmas Tree”. The disc is divided between traditional tunes and originals. Among the latter, she duets with Ariana Grande, Chris Stapleton and Brett Eldredge. But it’s the most intimate “Merry Christmas (to the one I used to know)” where Clarkson shines.

Jan Daley’s house for Christmas
Home For Christmas is one of those records that almost certainly won’t get the airing, online or on air, that it should. Still, it’s just as smooth as Cole’s. It’s jazzy, but not obscure enough to scare those whose definition of jazz begins and ends with Kenny G. Heavily orchestrated in places, in others it is only accompanied by piano and bass, as on ” The Best Gift “.

Feifke and Bennack’s Season’s Swinging Greetings
Big bands also bring joy. Conductor and arranger Steven Feifke and lyricist, singer and trumpeter Benny Bennack III have joined forces for Season’s Swinging Greetings. It starts off with the pleasant original “I think my girlfriend is an elf” and hits a plethora of high notes (literally and figuratively). Another original, “When Christmas Time Comes Around”, features a magnificent flute solo; both could easily become vacation must-haves.

Pete Ellman Big Band’s Twelve Christmas Grooves
Chicago-based Pete Ellman Big Band Presents 12 Vacation Favorites on The twelve Christmas furrows; the title song makes them a dozen bakers. Star singer and Chicago native Kurt Elling stars in “It’s the happiest time of the year.” The title track weaves together holiday classics and jazz standards in a variety of styles – swing, Dixie, classical, Latin – for a zesty holiday mashup. Best of all is “You’re A Mean One, Mr. Grinch” with the very low sounds of the bass saxophone and double bass trombone. Dynamic performances abound, and Ellman’s record is also a fundraiser for the Giving Instruments for Teaching Students (GIFTS) program, benefiting young musicians in Chicagoland.

I dream of Christmas from Norah Jones
Norah Jones maintains the jazz vibe. Her laid back approach here is so laid back that it sometimes seems to go upside down. Half of the tracks are originals, complementing classics like “Winter Wonderland” and “Run Run Rudolph”. Not the record for your pungent holiday season, it’s more suitable for late nights and that last cup of eggnog while watching the snow fall to the ground.

Kat Edmonson’s Vacation Swing
Another young veteran of the jazz scene (y) is Kat Edmonson. His voice and performance transport the listener to nightclubs and to the days when the Great American Songbook was not a relic but the pop of the day. National public radio praises its “sparkling comeback charm”. His versions of â€œWhite Christmas,â€ â€œO Christmas Tree,â€ and lesser-known dishes like â€œThe Christmas Bluesâ€ on Holiday Swingin ‘are fun and festive if you enjoy vintage pop (Edmonson’s description of his style). Recommended if you are a fan of Scott Bradlee’s Postmodern Jukebox.

Merry Christmas from JosÃ© James
While Edmonson’s style recalls the popular sounds of the 1930s, JosÃ© James updated it some 20 years later. Merry Christmas from JosÃ© James. Fan of John Coltrane, McCoy Tyner and Miles Davis as well as soul, R&B and hip hop, the singer favors a refined approach to holiday classics, like Sinatra or Cole. His laid back approach is perfect for â€œHave Yourself a Merry Little Christmasâ€ and the lesser known â€œThe Christmas Waltzâ€. â€œChristmas in New York,â€ one of the two originals, celebrates a holiday where â€œA gift is almost everything, the joy that love can bring is smiles on faces everywhere.â€

Steve Wariner’s Christmas atmosphere
Steve Wariner’s new vacation version indeed It feels like Christmas. It’s more twirling than Clarkson or Eldredge but few country artists would stage a flute. Nonetheless, Wariner does so on the opening title song, one of six tracks he wrote or co-wrote. Alternately folk, country and always Christmas, Wariner’s voice goes easily with most of the accompaniments on offer, from guitars to backing vocals. He avoids vocals altogether on a solo guitar version of “It Came Upon a Midnight Clear” and a medley of “Away in a Manger”, “O Little Town of Bethlehem” and “We Wish You a Merry Christmas”.

Uptown Vocal Jazz Quartet Fools For Yule
The immaculate harmonies of the Uptown Vocal Jazz Quartet are a joy. While the title Crazy for Christmas you might assume this one is a pleasant performance, that’s anything but. This is a heartwarming and heartfelt ensemble of vocal jazz interpretations to classic holiday tunes, backed up by originals by frontman Ginny Carr Goldberg. Perfect for Hi-Los or Manhattan Transfer fans. Or anyone who loves light and engaging harmony.

How does Kirk Whalum’s Christmas sound?
So we have one question left: How does Christmas sound? Saxophonist Kirk Whalum offers some suggestions on his album of the same name. It includes instrumental versions of lesser-known holiday dishes like â€œA Babe Is Bornâ€ and â€œLift Every Voice and Sing,â€ as well as more familiar tunes like â€œWhat Are You Doing New Year’s Eve? A singing “God Rest Ye Merry, Gentlemen” presents his brilliant flute. Nephew Kortland (vocals) and son Kyle (bass) appear on the title track, while younger brother Kevin sings with Take 6 on “Seven”. Both tracks are originals written or co-written by Kirk. Kevin also sings on “Thorns in the Straw”, while Chantae Cann’s voice is featured on “Mary, Did You Know?”