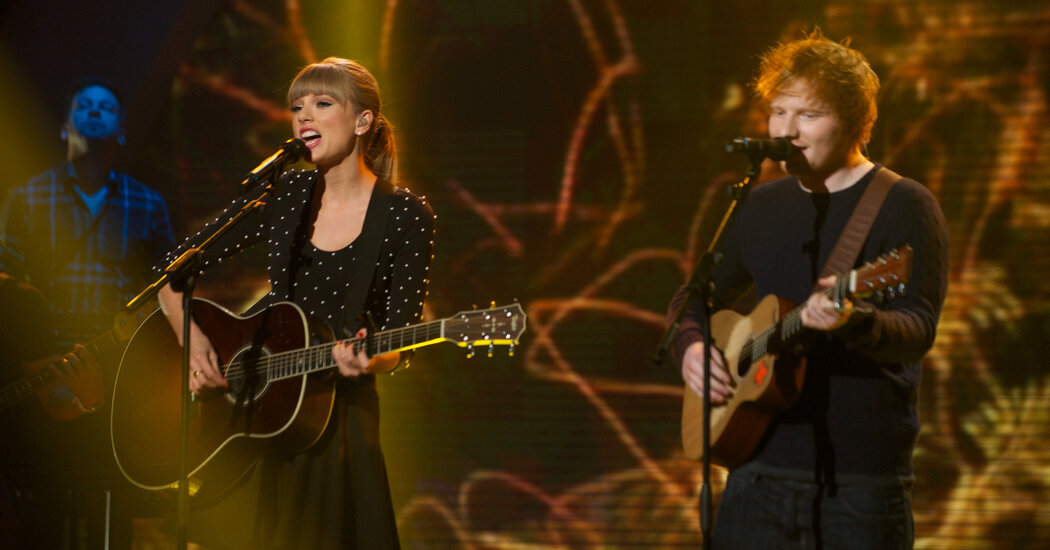 Taylor Swift and Ed Sheeran Up the Ante, plus 13 other new songs

Ed Sheeran resorted to well-used card game analogies in “The Joker and the Queen” on his 2021 album, “=”, for one of his many endearing confessions of humility: “I know you could fall in love with a thousand kings,” he sang as piano and strings dampened his ballad phrases. Now the song has been updated as a superstar alliance, bringing Taylor Swift to swap verses and share harmonies. It has fan service; years later, the video brings back the actors who were in the video for Sheeran’s previous duet with Swift, “Everything Has Changed.” Still, Swift’s new verses up the ante, as well as the tension: “I’ve already been played if you hadn’t guessed.” There’s always a happy ending — no damage to the copyright value as a wedding song — but Swift adds the slightest bit of skepticism. JON PARELES

Jazmine Sullivan added 10 tracks to her 2021 album “Heaux Tales” to make “Heaux Tales, Mo’ Tales: The Deluxe.” She retained the pattern of the previous album: songs alternating with spoken anecdotes about transactional romance. “Roster” is a flippant, flirtatious, stripped-down rejection of monogamy. Syncopated guitar chords and flamenco handclaps accompany Sullivan as she announces good news to someone – “There’s still a place on my list” – but sets clear conditions: “I have room for love them all / because they always answer when I call.” Talk

Let Ibeyi welcome you to its rebirth. The Franco-Cuban twins have been performing under the name Ibeyi since 2014, but on “Sister 2 Sister,” the new single from their upcoming third album “Spell 31,” they sound more confident than ever, arriving with a message without equivocal for those who see their name as an exotic disturbance: “This is how you say it: Ibeyi. The production is sparse but robust, a harmonious, sung chorus leading to a reaffirmation of brotherhood. “Slow down, now that we’ve grown up, let’s start over,” they sing, to the kind of austere percussive atmosphere that made their music so gripping in the first place. ISABELLE HERRERA

The pandemic has been a time of renewal and reinvention for Taylor Swift. After releasing two albums in quarantine, the singer is in the process of releasing re-recordings of her first six albums.

Caroline Polachek navigates majestic puzzles on “Billions,” her latest collaboration with co-producer Danny L. Harle. Soaring electronic chords and an electroacoustic mesh of percussion – tablas, synthesizer blips, string-like plinks, backing notes, calmly slapped highlights – accompany a serenely airy melody with a distant touch of Celtic ballad. The lyrics are sketchy – “psycho, invaluable, good in a crisis” – while the arrangement expands with vocals and orchestration. At the end, a children’s choir took over, singing in counterpoint to proclaim “I’ve never felt so close to you”, but leaving all the mysteries open. Talk

There was plenty of drama in Bettye LaVette’s 1965 single “Let Me Down Easy” and her multiple re-recordings of the song, which was written by Dee Dee Ford aka Wrecia Holloway. LaVette sang about the connection that stays with an ex-lover no matter how badly the singer wants to move on: “I know it ain’t over since the last goodbye.” Odesza, who brings a certain Slavic melancholy to the four-on-the-floor dance music, samples LaVette’s most heartbreaking vocal lines and stretches the angst, proving once again just how classic the song remains. Talk

In his timeless collaborations with griot-poet-commentator Gil Scott-Heron, Brian Jackson not only played dazzling jazz piano parts and supple flute solos: he wrote or co-wrote many of the best duo songs, and sometimes even took over directing vocal duties. “All Talk” is the lead single from “This Is Brian Jackson,” his first true solo album in over 20 years, and it’s a reminder of Jackson’s many talents. A peppery funk anthem, the track is shaded with the same Caribbean inflections that colored the music he made with Scott-Heron and the Midnight Band and returns to their mode of inspiration and awareness with studio sound. cleaner and condensed of the 21st century: “Our world is what we make it”, sings Jackson. “So all we have to do is make up our minds.” GIOVANNI RUSSONELLO

Congotronics International is an Internet-age phenomenon: a global alliance of traditional yet hip bands from Kinshasa with their fans from across the indie-rock spectrum and the hemispheres, including Deerhoof, from California, and Juana Molina, from Argentina. Belgian label Crammed Disc actually organized a European tour for Congolese bands Konono No. 1 and Kasai Allstars and an equal number of rockers in 2011. Live recordings from these shows and subsequent studio collaborations – in person and at distance – eventually yielded a double album slated for April 29, “Where’s the One?”, named after cross-cultural confusion over the beat. “Banza Banza” illustrates the title of the album; it starts with an electronic roar, brutal bass and strumming guitars, and for a full minute of ricocheting beats, guitars, noise and vocals, there’s no telling where the downbeat is. Even when a solid four on the floor unmistakably enters behind Kasai Allstars’ Kabongo Tshisense lead vocals, the track is explosively overloaded. Talk

Anyone worried that there aren’t new ways to say old things should check out Pusha T, who dutifully wakes up every day and hones refreshing approaches to rapping about the spoils of the drug trade. “Everybody get off the boat, right? / But I’m the only one who can really fight in the snow,” he says on “Diet Coke,” the lyrics are delivered with a growl and a little implied flourish flourishes at the end. For Pusha T, these boasts are as cozy and familiar as a cashmere blanket:

They’re mad at us, who wouldn’t?
We became everything you couldn’t be
Everything your mama said you shouldn’t be
Porsche horses spinning like “Look at me!”

For the past two years, Central Cee has explored the lighter side of British exercise, but ‘Khabib’ tilts the other way – an ominous production, a title referencing one of the world’s most popular MMA fighters. most dreaded and some lucid revelations: “Always trying to get the party going, that’s how I got stung at Wireless / told my little brother when I came out of the cells, ‘That’s Calm down, one day I’ll be in the front page.” CARAMANICA

It’s increasingly rare to find artists who use their words selectively, if at all – who don’t explain themselves too much, but imbue their work with a fuller feeling than language can convey. Sontag spoke of this when she described art as being “an instrument of ritual”, freeing itself from meaning. It’s not easy for this kind of thing. But on “Unrest,” a new two-track single from harpist Brandee Younger, the title is the only apparent reference to the social upheaval and deeper stories that inspired the music, recorded amid the pandemic at Rudy Van Gelder Studio. : The instruments say the rest. Younger uses repetition and depth to create a tide-like pull on his instrument, whether solo — like on “Unrest I” — or in a band. On the single’s second track, she rubs shoulders with Rashaan Carter’s propulsive bass playing and Allan Mednard’s drumming, letting them race and keeping her composure amid the anxious melee. RUSSONELLO

“Feel It Still”, the 2017 hit from the Portuguese band from Alaska. The Man, recalled a Motown beat and casually proclaimed “I’m a rebel just for fun”. Five years later, the situation seems much more dire. The beat is still peppy and the reverberating guitars keep the retro tinge, but attempts to ignore things are far more clearly acts of denial and utterly futile: “The house is burning, whoa / don’t mind .” Talk

Personal loss and concerns about global warming merge in “Swimmer.” Helena Deland sings in a muffled, humble voice over acoustic guitar strings and rumbling sound currents. She sings for someone who won’t be around long, who winces at a cold swim in the ocean but also realizes that “The warmer the waters, the wider the oceans.” The song pits brief human lives against the inexorable forces of nature; noise is the eternal sound of crashing waves. Talk

If you still associate pianist, composer and critic Ethan Iverson with the Bad Plus, the famous anti-jazz trio he left in 2017, you won’t be totally fazed by “Every Note Is True”, his brand new Blue Note. Debut records. A number of Iverson’s original nine on the album have the same funny, diatonic structuring that defined his songwriting for the former band: This is Bacharach meets Brahms meets John Lewis. On “The Eternal Verities,” Iverson is joined by two stalwarts of jazz lineage, each with extensive piano trio experience: bassist Larry Grenadier and drummer Jack DeJohnette. RUSSONELLO