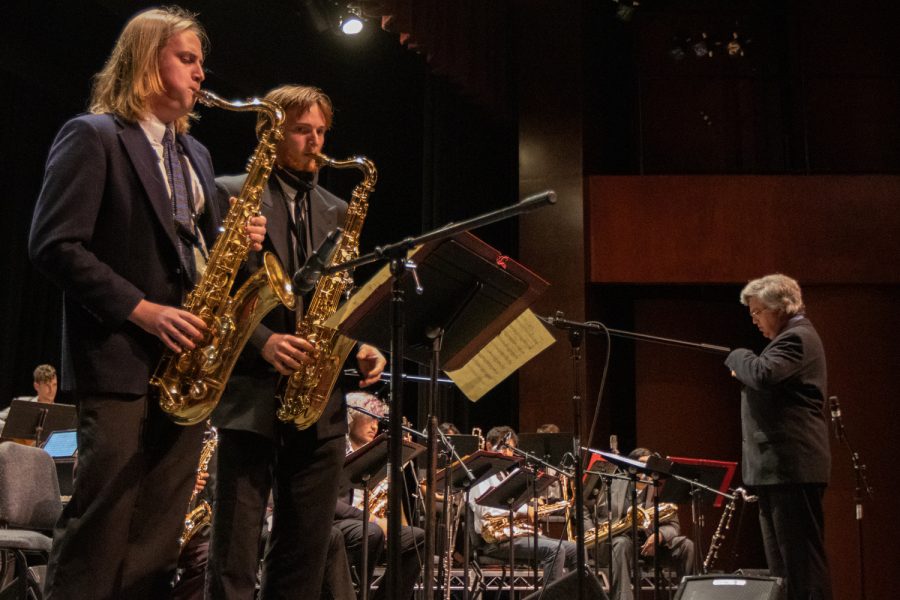 Music reverberated around the Garvin Theater with soft and playful tunes during the Jazz Ensemble concert on Monday November 15th.

The concert featured the big groups from City College – the Lunch Break Big Band, the Good Times Band and the Monday Madness Band.

The night resonated with viewers of all ages typing, clapping after each solo and group performance. The atmosphere of the show was relaxed and welcoming, with each group director â€œbreaking the wallâ€ between performers and the audience.

The directors explained the meaning of each piece performed. The crowd was completely captivated by the music and the stories.

It was as if a large group of people gathered to appreciate the art of each piece.

The favorites of the night were “The Heat’s On”, “Love is Here to Stay” and “In a Mellow Tone” which brought in an array of upbeat rhythm swings.

Many songs highlighted the work of the performers. Several solos have been given by students Leo Rubio on saxophone, Jay Real on trumpet and piano, and Ethan Fossum on drums, to name a few.

The “Good Times Big Band”, led by instructor Eric Heidner, brought many classics to their set.

Heidner spoke about the deaths of many famous composers, educating the crowd on the history of each song they were going to perform.

The song “I Remember Clifford” was dedicated to an old friend who passed away.

It was a lovely way to remember their minds and tie a song to its existence on earth.

Lunch Break had a song that took a long time to get approved.

Their song “Attack of the Tenor Titans” was an opportunity to showcase the talent of saxophonists.

Lunch Break director Jim Mooy was looking for a way to present his saxophonists in a song. With solos by Simon Blondell and Eli Nania, the song was fluid, upbeat and fully showcased the talent of the saxophone lineup.

To end the evening, â€œMonday Madness,â€ led by Assistant Professor Andrew Martinez, amplified the crowd with a variety of unique sounds and instruments.

Their numbers were vibrant in their own way, with shakers subtly behind the music and the cohesive layers of the other instruments completely immersed in the sound.

Their songs were not lacking, providing the space with strong rhythms from the drums or the solos of expert Justin Claveria on saxophone and Mike Meunch on trumpet.

Overall, the jazz ensemble’s concert showcased the talent that roams the halls of City College and the audience’s appreciation for the music that was brought in tonight.

To feel the thrill of watching the bands, the next shows can be seen on SBCC Music Concerts.