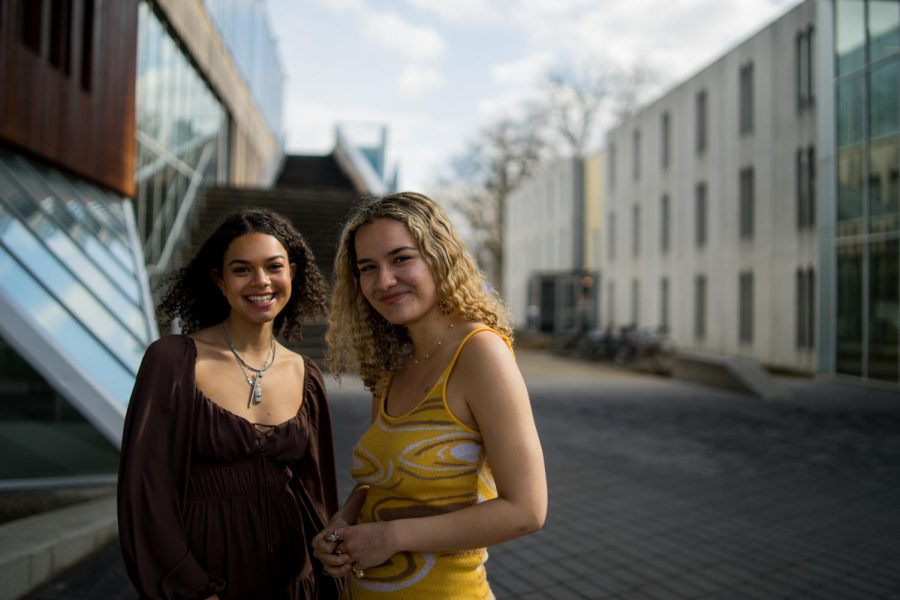 The Crimson Collective, officially known as the Oberlin Femininity and Black American Music Collective, is the creative idea for a dual degree sophomore jazz singer Marley Howard and Double DegreeFreshman jazz singer Gabi Allemana. The Collective seeks to center the artistic voices and sounds of women and non-binary jazz musicians with the goal of promoting greater inclusion in the field of jazz.

This interview has been edited for length and clarity.

Could you tell us more about your background and how you came together at Oberlin?

Gaby Germana: My dad was a professional musician, and that’s what got me into music. I was in that choir in Chicago for 10 years, and I didn’t really get into jazz singing until the year before I applied here. We were all on the Oberlin 2025 page, where Marley found me and said, “Oh my God, Jazz Voice.” I contacted her and asked her, “So why did you transfer?”

Marley Howard: I left the conservatory where I was and came to Oberlin. I wanted to redo my freshman year. And then I saw Gabi and I was like, “Oh my God, she majors in Jazz Voice.”

GEORGIA: And then our first day, we had this jazz freshman pizza party on the roof of the Kohl Building, and I saw her and ran up to her. I was like, “Hi, I’m Gabi.” We instantly fell for each other and have stuck with each other ever since.

Your group is a fairly recent invention. What kind of schedule did you operate from and what was the experience of planning and organizing, especially during the winter semester when much of this happened.

GEORGIA: We decided to launch the Crimson Collective during this time. We spoke to La Tanya Hall, Associate Professor of Jazz Voice, who is our private teacher and advisor.

MH: I think we had a little trouble. I think Gabi was more frustrated with men in jazz. I remember we were both in the jazz keyboard lab and we were just like, “Let’s start a support band.”

GEORGIA: It was my first time dealing with jazz men, and I think that’s probably why I was a little frustrated.

You can decide what you want to reveal, but when you’re talking about jazz men, was there a general feeling that you didn’t feel like you weren’t supporting each other, or were there specific things that have occurred?

GEORGIA: It was a bit of a mix of the two. We are both the only women in our set. It was hard during rehearsals, we talked about it a lot. There were also micro-aggressions in the textbooks that we had already encountered in school. But there were also plenty of side comments from other cisgender men in the department. They were telling me they didn’t really believe I was playing an instrument besides singing and stuff like that.

MH: You walk into a room and you’re like, “I don’t think they really want me here. And if they want me here, is it because I’m a good musician or is it because they think I’m pretty? You are constantly questioning yourself. I left my previous school because of the misogyny and racism I faced there.

What kind of resources have you drawn on for inspiration and support to help you build your organization from scratch?

GEORGIA: A lot of what helped us create our band is this four hour documentary from this band called This is a Movement, which is an organization that does similar things to us. They have discussions about genre and jazz and black American music.

MH: There is also the “We Have Voice” collective which I met because there was a famous jazz musician who came to talk to me last year around December when I was having trouble being a woman in my Jazz department. She said, “Here, I am part of this group; it’s called “We Have Voice”. We have this code of conduct which establishes a zero tolerance policy for harassment of any kind. That’s something we were trying to implement here with Jay Ashby. Hopefully it will be implemented across the department.

Could you tell us more about the other types of resistance you encountered when creating this group? I understand that you are hosting an upcoming roundtable and you recently clarified what the intentions of this discussion were.

MH: I think it might be threatening for a group like ours to come in and say, “I want to talk about these things. Usually, cis men are not ready for these conversations.

GEORGIA: People in this department, being 90% cis men, become really comfortable with each other and they don’t have to talk about these things all the time. And so they just decide not to think about it, which honestly, if I was them, I’d do the same.

It’s an easy life but there are more women and non-binary people joining this program and I think it’s helpful for us to have this discussion just to get them to recognize that they need to share the space with these people and that they have to put them at ease. We don’t try to scare people into feeling bad for us; we just want to make our lives easier.

Most of the resistance comes from close people who feel open enough to talk about it with us. They don’t know what it is.

What are some examples of the rhetoric and behavior that made you say, “That’s not okay.” I want to give readers a vivid understanding of what your experience has been like.

GEORGIA: For me, there was a lot of talk about the cancel culture here. People sometimes take that idea out of context — a cis white man says something in class that can be a little offensive. Then someone like Marley or me says, “Hey, don’t say that.” And then another cis man will say, “You’re going to have them canceled because we’re white or we’re cis.”

I’m not trying to exile you from here. I want you to understand that this makes us uncomfortable, and you just need to look outside your own bubble to make room for us.

Additionally, their perceived weakness in music is often associated with what singers tend to do often: sing ballads — emotional, lyrical melodies — all the time. A lot of guys are going to hate this. They say, “You have to play fast all the time, you have to play all those notes, blow all those changes,” just to be in a jam session and show them you’ve got some talent. Someone who moves you to tears sometimes doesn’t have the same power for them. I hope we can get them out of that way of thinking.

Singing a ballad or scatting – improvised syllabic singing – as a singer does is acceptable and is also an important part of the art of black American music. I feel like that’s something a lot of cis men tend to forget.

Is there anything else you would like to add?

GEORGIA: When we had our orientation at the Conservatory, we had this social justice in musical training. They talked a lot about race and disabilities and gave us scenarios we had to react to, but I noticed, especially in a room of all the jazz majors, there wasn’t a lot about gender in scenarios. Many women and non-binary people end up being the only ones as a whole. I don’t think anyone else in the band has to think about it. Our plan is to sort of provide training for working with gender in our department.