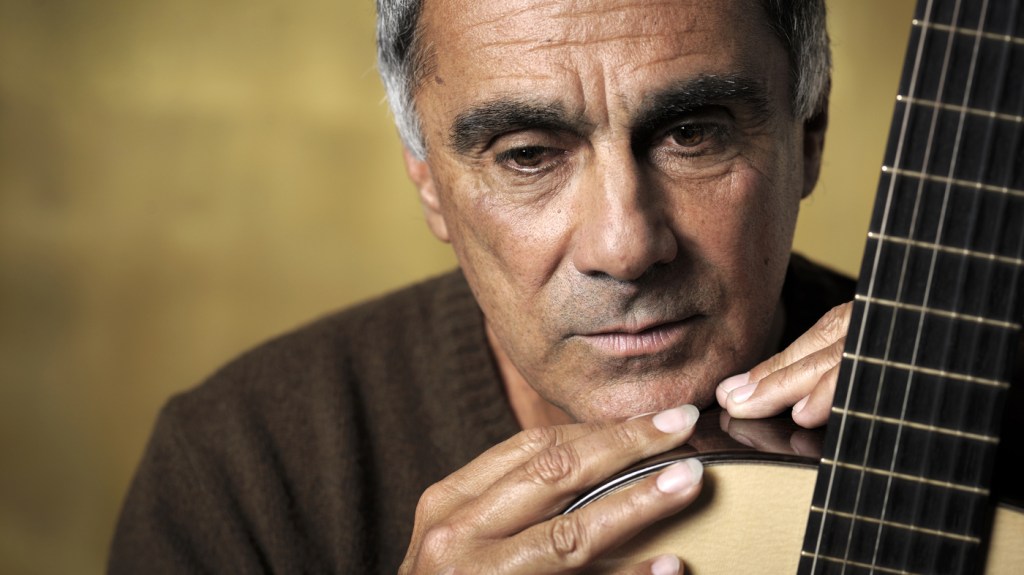 Long before Guinga made his first album as a leader, many of Brazil’s most influential and beloved artists had recorded his music.

Throughout the 1970s and 1980s, samba stars and jazz improvisers, pop icons and choro masters found his exquisite melodies irresistible, leading to classic recordings by artists such as Elis Regina, Clara Nunes, Elza Soares, Chico Buarque and Miúcha. Even the great French composer Michel Legrand got in on the act, recording Guinga’s “Passos e Assovio”.

But when the guitarist and singer finally started recording his own albums – singer and producer Marcos Valle launched Velas Records with Guinga’s 1991 debut album “Simples e Absurdo”, the first of his six records for the label – Guinga was not interested in reclaiming his tunes from the artists who submitted them.

Returning to California this week to attend Brazil Camp in Cazadero, where he mentored some of the Bay Area’s most interesting composers committed to Brazilian music, Guinga performs a series of concerts in the region that showcase the diversity of his work. He begins his Bay Area run on Saturday at the Sound Room in Oakland, where he will be joined by Rio de Janeiro singer/songwriter Anna Paes as special guest.

On September 4, he is one of the featured artists at BrasArte’s free Brazilian Day and Lavagem festival in Berkeley. This year’s procession and outdoor concert are dedicated to long-time champion of Brazilian culture, dancer, choreographer and founder of Casa de Cultura, Conceição Damasceno, who died in April after a long illness.

Guinga is also performing concerts in Kuumbwa on September 7 and at the Hammer Theater in San Jose on September 8 with reed expert Nailor “Proveta” Azevedo, founding member of São Paulo’s famous Banda Mantiqueira, as special guests along with singer, songwriter, pianist and percussionist from Santa Cruz. Claudia Villela.

Villela first discovered Guinga’s music in the mid-1990s during a visit to Rio, where she was born and raised. While rummaging through the bins of a small Copacabana record store, she came across one of her early Velas albums, and although she didn’t recognize his name, “I knew a whole bunch of people who played on it,” she recalls. “I fell in love with his music, which is so sophisticated and beautiful. I figured out how to get in touch with him and went to his house.

Their friendship evolved far beyond music. Rather than rely on composition for a living, Guinga studied dentistry and opened a practice with his wife, who is also a dentist. For many years, he took care of Villela’s teeth whenever she was in Brazil (and her two daughters too). She put him in touch with his cousin, the famous guitarist Jean Charnaux, and they became inseparable musical companions, playing and writing songs together.

It’s no surprise that Villela and Guinga bonded, as they both fell deeply in love with jazz. “I spent my teenage years listening to jazz for three or four hours a day,” he said. “It’s a discipline that I imposed on myself once I discovered it and at 11 I started to consciously think about being a musician, and this jazz was what really attracted me.”

For the Kuumbwa and Hammer concerts, the three musicians will perform in various configurations, including solo, duo and full trio. “We’re going to try to keep a flow with all these songs,” Villela said. “Guinga really likes a song that Ricardo Peixoto and I wrote, so we’re going to play it together. Actually, I’ve never worked with Proveta, but I really admire her. His acting is just beautiful and elegant, not flashy or over the top at all.

Born Carlos Althier de Souza Lemos Escobar in the suburbs of Rio de Janeiro, Guinga has always been known by the unique nickname, like many Brazilian musicians and footballers. A precocious talent, he was noticed for the first time at the age of 17 with his entry into the second international song festival of TV Globo in 1967.

Growing up in a working-class family in the countryside, he absorbed a wide range of Brazilian idioms like samba, coco, baião, modinha, choro and frevo, styles that later surfaced in his compositions. Even as he immersed himself in jazz and classical music, “I later realized how deeply Brazilian music was embedded in my subconscious,” he said. “it was the music that was played at home, where everyone was playing and everyone was singing.”