The NONEWFRIENDS outdoor concert. heard throughout the neighborhood

Get the latest Syracuse news delivered straight to your inbox.
Subscribe to our newsletter here.

More than 200 people filled the backyard of a home on Sumner Avenue on Saturday night. As the sun set across the sky, Syracuse University students mingled and laughed, enjoying the warm fall night. Then the sound of Jackson Siporin’s saxophone came through the crowd, signifying the start of the NONEWFRIENDS set. The energy of the band was infectious, and the audience got louder too, dancing and singing.

The outdoor house show opened with performances by the Sedona musicians and a child named Rufus. Once NOT-FRIENDS. took the stage, singer Liz Stuart encouraged the crowd to sing the band’s hits: “The Hook”, “Already Gone”, her personal favorite, “Not Your Girl”. The group got the audience dancing to covers of Katy Perry’s “Teenage Dream” and Kanye West’s “Ghost Town”, which Stuart performed with Sedona.

NO NEW FRIENDS. performed two unreleased songs, in which the lead singer excited the crowd by saying, “We hope this will get you jamming too.”

After almost finishing the show with their hit “Personal”, the audience screamed for more, and NONEWFRIENDS. delivered a reminder of Rex Orange County’s “Best Friend”.

Viewers said they liked the music and the ambiance of the setting. The outdoor stage was installed on the back wall of the house, and the wall and floor were decorated with fairy lights and indoor plants. For a few songs, the crowd waved their flashlights, making the whole yard shine. Graduate student Daniel Wilde said he thought the outdoor concert was a “brilliant idea”.

Sophomore Ava Lahijani agreed. “I felt euphoric and felt like I was in the clouds,” she said. “Then I looked around and realized that I was not in the clouds because I was surrounded by students from Syracuse. “

NO NEW FRIENDS. with Stuart on lead singer, Peter Groppe on guitar, Siporin on saxophone, Jack Harrington on bass and Scott Greenblatt on piano. The band members are seniors with the exception of Greenblatt, who is a graduate student. They’ve had several drummers over the years, and Chris Cummings – a friend of Greenblatt’s from high school – played percussion at the Saturday night show.

The group formed in the fall of 2018, during Stuart’s first year at SU. She met Groppe, Siporin, and Harrington during her first few days of freshman, and the three guys had met Greenblatt, then in sophomore, through SU’s jazz band. Stuart said the band officially started when Groppe and Siporin asked him to perform with them on a house show.

“We weren’t expecting this to literally turn out to be anything more than just a fun night out,” she said.

Stuart found the group’s name in a League dining room and laughed when she explained that at the time, they were each other’s only friends. She remembered how they announced the name at their first house show, and when the audience chanted NONEWFRIENDS., They knew the name sounded right to them.

“It all snowballed from there,” she said.

Greenblatt said NO FRIENDS. was cultivated by SU’s house show scene and said that these house shows were what instilled confidence in the group. He said the group aims to cultivate a “vibe” and a community in which the audience wants to be friends with them.

Stuart said the band’s strong friendship translates into their music and they are extremely committed to working as a team. They collaborate on the writing of all their songs, and between writing, production, editing, logistics and marketing, each has their own role. 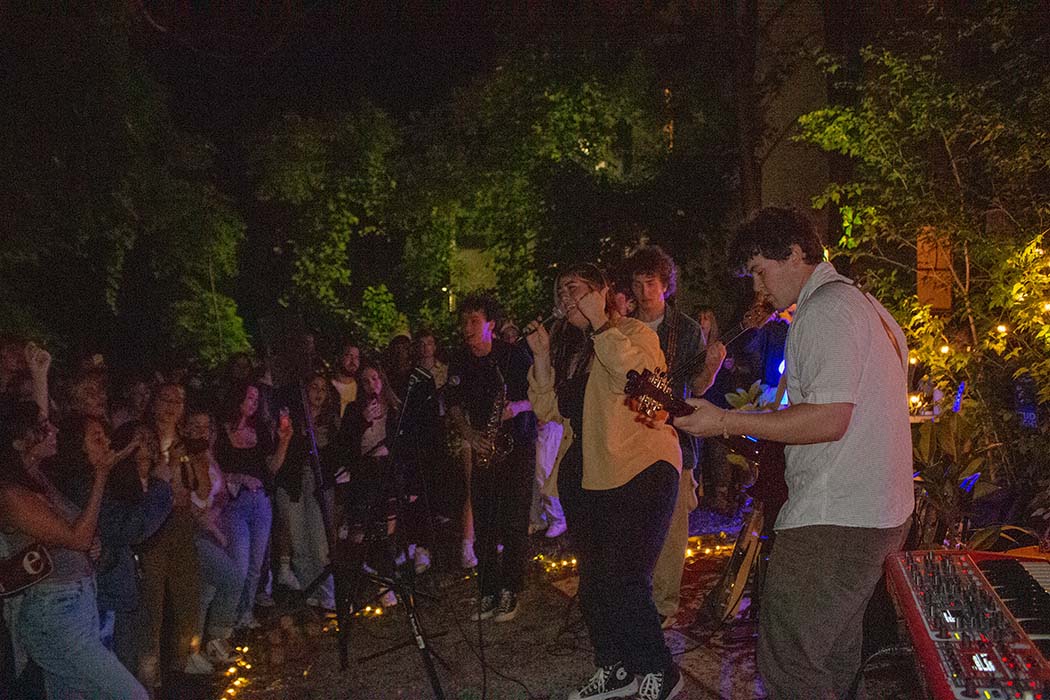 While creating a song, Greenblatt said it wasn’t really over until everyone put their own personal touches on it.

“At this point, we feel like family,” Stuart said. “When you write music together it puts you in a very emotional place… You have to be honest and vulnerable.”

When COVID-19 squandered the band’s performance opportunities, they used the year to record music and get closer as a band. Not only have they written, recorded, and released new music, but they’ve also created TikToks and videos that have helped them expand their reach on social media.

While FRIENDS. Describing his music as indie-pop, Greenblatt said that every member influences every song and Stuart commented on the jazz backgrounds many of them have.

“If you get to know everyone in the band you can really hear how apparent all of our influences are,” Greenblatt said. “There are jazz influences, there is funk, there is rock… Everyone brings their own style to the table.

NO NEW FRIENDS. performed at Pianos in New York this summer, and the group plans to perform in other concerts soon. They will open for popular indie-soul group Melt at Funk ‘n Waffles in downtown Syracuse on October 21. They also plan to release a new song soon, Stuart said.

Greenblatt and Stuart both hope to go on tour, and the band want to keep making music together for as long as possible.

Stuart said the group currently has a solid foundation and foundation. She said this year is important for them to keep pushing before they all graduate, but the group generally agree that they want to keep playing together after college.

“My goal is just to keep making music with people I love,” she said. “As cheesy as it sounds, it’s the best feeling in the world.”