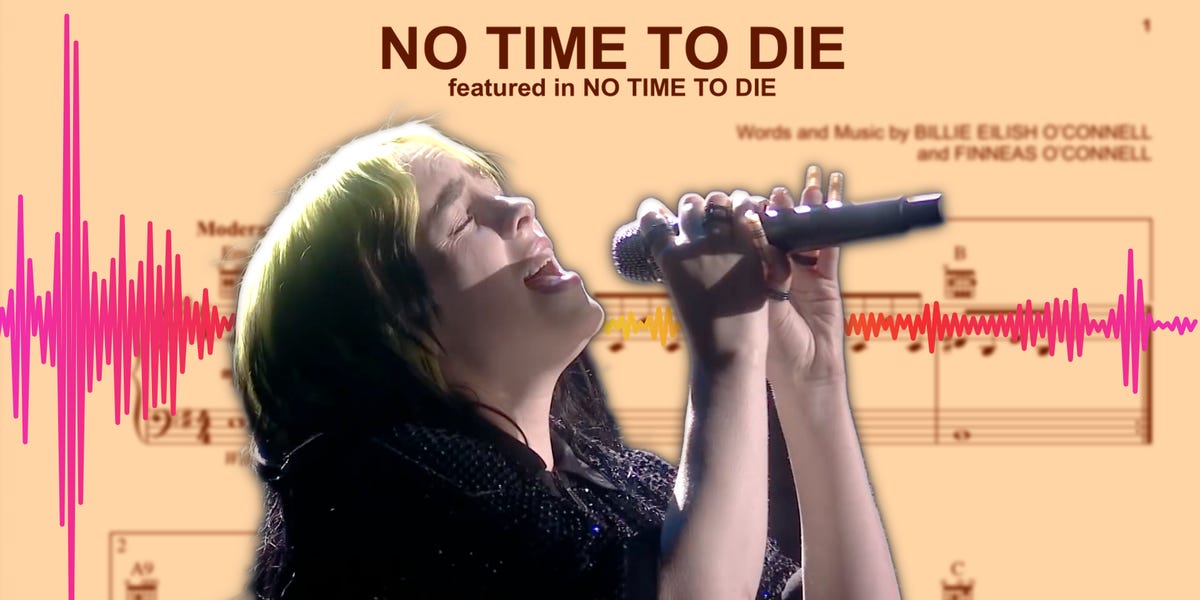 Narrator: When I think of James Bond, I hear something like this.

It was Bond’s very first theme, starting in 1962. And at first it might seem quite different from this one …

Fallen for a lie â™ª

Billie Eilish song for the 2021 movie “No Time to Die”. These songs fall over 50 years apart, so obviously they have different styles. Yet there is also something Bond-y sounding in both, which made me wonder: what is it that unites these songs from totally different eras and gives them that unmistakable Bond sound? I decided to go through all of the Bond themes from the start of the franchise to determine if there is a musical code that connects the best of them and see how Billie’s song stacks up against the rest.

There is simply no time to die â™ª

To help me distinguish over five decades of Bond themes, I enlisted the help of Jon Burlingame, film music historian and author of “The Music of James Bond”. After listening to the songs over and over, I found three key ingredients that seem to define the sound of Bond. I then broke down each theme one by one to find out how many of those elements they were using and if that could separate the hits from the failures.

The first element that stood out for me in Bond songs was the instruments. And you can trace the beginnings of Bond’s instrumental style to this 1962 “James Bond Theme” released for Bond’s first film, “Dr. No”.

Narrator: A few things stand out here. First off you have the deep, nasal 60s guitar.

This drippy surf guitar is truly a sound of its day, so it’s more closely associated with the Sean Connery era. But I also noticed riffs on it in a number of subsequent Bond themes.

To want too much

The next instruments you hear in “The James Bond Theme” have stuck throughout the franchise.

The mid-section of the bebop has in fact become, in recent years, more of a Bond theme in film scores than the [mimics surf guitar] guitar riff.

Narrator: All of those screaming trumpets and horns are part of the big band jazz sound created by John Barry, the composer who arranged this original Bond theme and went on to compose 11 of the first 15 films. From the third film, he had started to associate all these brass instruments with large arrangements of strings, flutes and harps.

Jon: So it was Barry who started the whole Bond sound with this kind of dangerous mix. Part jazz, part rock, part orchestral.

Narrator: This would become the instrumental model of Bond’s music. And it’s clear from the first seconds of Shirley Bassey’s theme for the third film, “Goldfinger” from 1964.

Here you have loud horns …

and later in the song, the harps.

The intro to “Goldfinger” is so iconic that Gladys Knight arranged her song decades later for the 1989 film “License to Kill”.

And listening to the instruments of all the other Bond themes, I found that everyone was at least referring to that big brass and full orchestral style defined in “Goldfinger”. Even in songs that seem to break from the format, you can hear clear nods to John Barry’s classic instrumental style. Take Madonna’s theme for “Die Another Day”.

It sounds super electronic, but she actually recorded it with a 60-string orchestra, and you can hear those chopped strings in the song.

More recently, the duo of Jack White and Alicia Keys for “Quantum of Solace” has these big brass and orchestral sections …

even if they somehow get lost in the mix.

So this big band-string combo is definitely a Bond sound staple. But obviously instruments alone aren’t enough to distinguish Bond songs from your typical chart hit. I have found that it is the chords played by these instruments that give Bond’s music its spy feel, and in particular these four chords here.

This rising and falling line is sometimes referred to as the motif of suspense. It gets this name because it’s such an essential part of the suspenseful sound in Bond films. This four-step progression first appeared in the 1962 theme and has been recycled into every film’s score since then.

So how many actual theme songs incorporate this motif of suspense? I counted 15. In some of them, the pattern is more obvious.

At the skyfall â™ª

But in others, you really have to listen to it. I liked the way Sheryl Crow hid the motif at the end of her chorus for “Tomorrow Never Dies”.

The third and final element I followed first appeared at the very end of this original “James Bond theme”.

If this sounding chord sounds a bit mysterious, it’s probably because it’s not your standard three-note chord. It’s a minor chord with two major intervals, a seventh and a ninth, added – a combination of tones that we’re not used to hearing in popular music. To compare, here is a straight E minor. And now here is this chord from “The James Bond Theme”. This special chord also appears as the gunshot chord in many gun barrel sequences in the movies.

And this is just the most famous example of the types of complex chords found in Bond’s music. Instead of sticking to just two chord flavors, major or minor, Bond songs tend to use all of those minor chords with major intervals stacked on top. This creates more ambiguous and less predictable harmonies for our ears – the kind of harmonies perfect for spy music. This last chord in “The James Bond Theme” in particular is so closely associated with the movies that it is often referred to as the “Bond chord”. So, naturally, I had to include it in my column. I have found that 13, or about half, of the theme songs recreate the effect of the Bond chord in some way, usually by opening or closing on a dissonant chord similar to the chord. original.

Or, in the case of “Skyfall”, both opening and closing on such a cord.

OK, so we have the brass and the stringed instruments, this suspenseful motif and the jarring Bond string. You could call these three musical touchstones of the franchise. Some of the most iconic themes use all three. This includes, of course, the original â€œJames Bond Themeâ€ and â€œGoldfinger,â€ the two songs that served as musical plans for the rest of the series. Other themes managed to get away with just two of these characteristics while still retaining the Bond sound.

And six of the themes only worked in one element of Bond, the instrumentation, leaving out those other two characteristics. The first of these outliers was Carly Simon’s â€œNobody Does It Betterâ€ for the 1977 film â€œThe Spy Who Loved Meâ€.

It’s a perfect ’70s ballad, but does that sound Bond-y? Not really. It was a huge success, however, which might explain why we saw it followed by a streak of Bond songs that deviate from the formula, and with less success. 1979’s “Moonraker” is often described as Shirley Bassey’s weakest Bond song.

Sheena Easton’s “For Your Eyes Only” is a rock ballad that never quite turns into a Bond theme.

Until I look at you

After this series of rather forgettable songs, most of the themes tried to incorporate several Bond tropes. You get a few exceptions in Madonna’s “Die Another Day” and Sam Smith’s “Writing’s on the Wall” for “Specter,” each of which is really just a nod to Bond’s instrumental style.

And the two were quite controversial as Bond themes, perhaps because they seem to reflect the artist’s sound more than the franchise’s.

Based on this analysis, it looks like there is a winning formula for Bond songs after all. So let’s take a look at Billie’s â€œNo Time to Dieâ€ and see how it fits, starting with the instrumentation. “No Time to Die” begins with a repeating series of piano key tinkles …

similar to the figure repeated at the beginning of “Diamonds Are Forever” played by an electronic organ.

Then, as we head into the chorus, we get a little hint of the twangy surf guitar from the original theme.

After the chorus, we finally hear the orchestra of 70 people, arranged by the film composer Hans Zimmer.

Jon: You’ll hear the kind of sassy brass that Barry incorporated into his 1960s Bond scores. And then, of course, the kind of rich stringy sound that delicately weaves its way into Eilish’s song.

Narrator: Now it’s like a more subdued version of a classic Bond orchestration.

So the instruments, check. Now what about this suspenseful ground? If you listen carefully, there is a light riff just before Billie starts to sing. And other subtle versions dot the song.

The main chord progression also matches that of three other thematic songs from the Daniel Craig era. All play on the chord movements of the original motif.

So Billie reaches the three signifiers of the sound Bond. But notice how she leaves the Bond Cord mark until the very end of the song, the same way she does those silent synth plays on the suspense motif and takes a long time to build from her sparse instrumental. usual in the full orchestra. This is really Billie’s take on Bond. It’s discreet and hushed, and it works.

After going through nearly 60 years of Bond themes, one point to remember is that these songs are meant to define eras. And in the most successful, the artists weave in Bond’s musical traditions while leaving their own imprint on the franchise. Billie did just that. The James Bond themes are a cultural institution at this point, and â€œNo Time to Dieâ€ has all the DNA of a great.

Jazz Jam Festival at the Hilton Garden Inn on October 25; profits go to the Universal Temple of the Arts