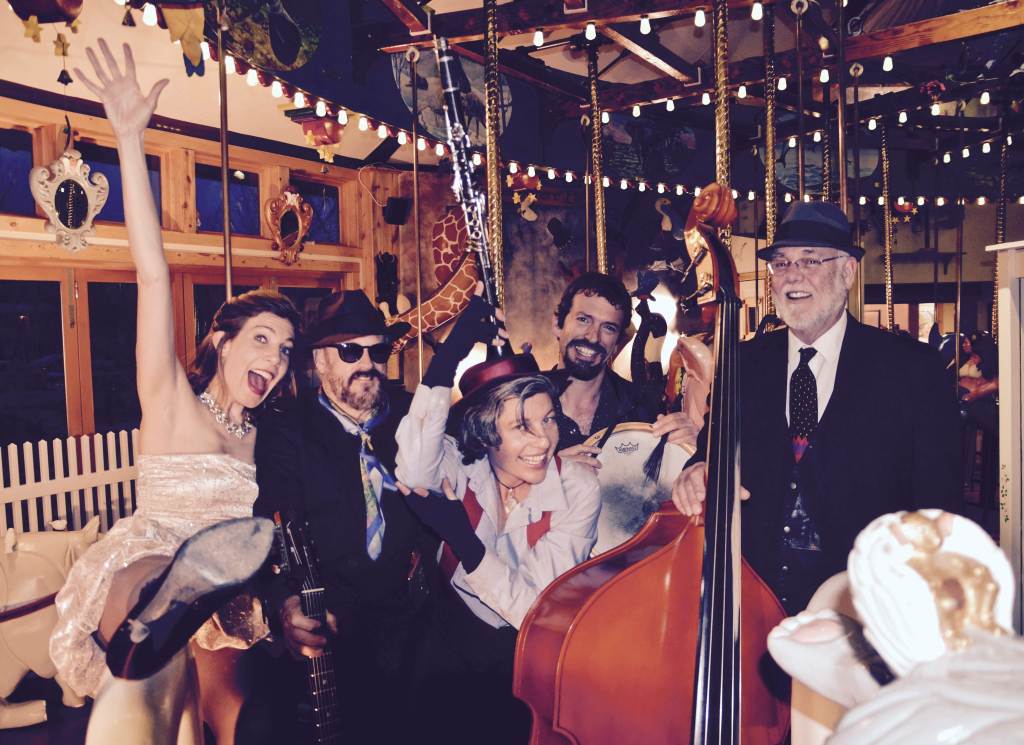 On the cover of David Williams’ album “Snake Oil” Trickster Carousel, viewers meet the gaze of a blonde shyly holding a snake in front of her face. Behind it is a red striped background that we can only assume to be a panel from a carnival tent that, when pushed back, can reveal a sword swallower, bearded lady, or a titillating peep show.

The woman, rightly so, is the Serpentine Queen of Boulder Burlesque, a dance troupe that Trickster Carousel collaborated with in 2020 as part of the Boulder Fringe Festival.

The art of the record – like the 12 songs it contains – has a vaudeville-esque vibe.
While the essence of the five-member group is undeniably theatrical, they don’t seem incredibly old-fashioned.

Sure, there’s a certain level of vigorous kitsch, but all of that is replaced by the tight musicality of the members, the lyrical excellence of Williams, and the impressive vocal chops of Ashlynn Manning, who spent her twenties in Brooklyn as as an electropop dancer.

“Cradle to the Grave” is a swing track about birds and bees that relays the importance of doing it – and doing it often.

“Trapeze” is a sultry serenade filled with flamenco sounds and metaphors about going your own way without a safety net.

Trickster Carousel takes to the stage at the Boulder Theater on Thursday, July 15 at 8 p.m. to celebrate the release of the latest album. Tickets cost $ 25.

We caught up with Williams to learn more about his fascination with the carnival culture of yesteryear, what people can expect from the band’s next show at the Boulder Theater, and what music can often be found on repeat in his Louisville home. .

KalÃ¨ne McCort: I love the theatrical vibe of the last album. How long did it take for this record to come true and where would you say you got your inspiration from?

David Williams: When I was 13, a carnival came to my town in DeKalb, Ill., Set up in an empty field across from the high school. Back then, carnivals were pretty rough. My buddy and I helped set it up, for five bucks each and we took our money and played all the naughty games, like trying to get a hoop out of a soda bottle. If you did, you won a pack of cigarettes. Ha! True. They were costing 35 cents a pack at the time.

Well at night there was a peep show you had to be 18 to get in so we snuck around and saw it and I wrote the “carnival song” about that experience. I lived in Nashville a few years ago and a Grammy-winning friend of mine highlighted this song by reading it verbatim to the Nashville Songwriters’ Association as an example of a writing masterpiece. of songs. But it has always been popular with the public. So during COVID, I revisited that theme, found photos online of Susan Meiselas, and got the idea to write the songs for the album.

KM: Have you always had an affinity for swing music and vaudeville-inspired entertainment?

DW: I studied the mandolin with the great Jethro Burns in Chicago, famous for Homer and Jethro, and he learned all his style from the greatest Django Reinhardt, the French gypsy guitarist who, with StÃ©phane Grappelli, founded the Hot Club de France in the ’30 years in Paris. So I loved this music as soon as I heard it and started playing it in my twenties.

Of course, we didn’t have access to YouTube and all the ways to learn back thenâ€¦ having to listen to Django and drop the needle on a record over and over again. During COVID, we collaborated with Boulder Burlesque, a live show, and I wrote some of the songs with that event in mind, like “Strip Girl.”

KM: What can attendees expect from your next show at the Boulder Theater?

DW: Well the band is spectacular and while I was writing the songs for the album Ashlynn Manning sings most of them, and she’s a real cabaret artist. She has the energy and stage presence of a Liza Minnelli and takes my songs to a new dramatic level. And all of the band members are just awesome.

I also sing it, and I’m a gypsy jazz guitarist, so that element is in the music – gypsy jazz, swing, jazz, blues and Americana. I’m also a screenwriter, novelist, short story writer, so my songs are literary in the tradition of writers like Tom Waits, Leonard Cohen, Randy Newman – because each song hollows out a character or a theme, sometimes funny, sometimes tragic, but telling a history. One reviewer called my songs â€œjazz storiesâ€ and I loved that description – it’s perfect.

KM: I’m curious, which musical artists, past or present, don’t you get tired of?

DW: I really like the great music of the 30s, especially Billie Holiday and all the blues and jazz artists, with, like I said, a fondness for Django and Grappelli. But I also like, as a singer-songwriter, a handful of songwriters – John Prine, Cohen, Dylan, Springsteen, Waits – who have literary flair and write with depth. They are not many. Very little.

KM: After listening to “Snake Oil” I feel like there is great potential for a play inspired by the album. Is this something you might see yourself doing in the future? Any bucket list goals you hope to hit soon?

DW: I’m currently working with a producer in Hollywood and I’ve written three separate pilots for some Netflix or Amazon shows we’re releasing. It’s a very complicated process, getting a studio signed, people’s money and getting the actors to commit to a series, but that’s what’s happening in my life now, with my fingers crossed.

The arts are always a gamble and you never know what’s going to take off and what’s wrong. But I love to write about the lives of characters, I love to write stories and I think art is something that can make people become more empathetic, more compassionate, because through stories we learn what it’s walking in another person’s shoes and living your life. In doing so, we have the chance to get rid of the prejudices we have against others than ourselves. Nothing else is so powerful.

I also wrote a book on the brain called “The Trickster Brain” and in this book I describe how most of the decisions we make are emotional because the brain has not evolved to “think”. As Antonio Damasio, a great neuroscientist, said: â€œThe brain is a feeling machine that thinks, not a thinking machine that feels. This means that most of the behaviors and thoughts do not emanate from any sort of logic, but that they originate from the oldest parts of the brain which are ancient, primitive, primitive. This is why we are so often wrong. The Trickster is an archetype – what happens in every culture on earth, and he / she can be bad, good, or both. We all have a trickster inside of us and he represents the primitive brain. The best aspects of the trickster are his rebellion against authority, his desire to stand up against tyranny, fascism, to be the wise fool and to speak the truth to power, as the fool does in “King Lear”. That’s why we’re Trickster Carousel – clinging to this ideal of showing the other side of things that are truer, that are not afraid to speak out.

And the carousel is the constant sense of change, of magic, of wonder, of which we are all a part. We did a photoshoot at the Carousel of Happiness in Ned and the guy there spent 27 years carving the animals on the carousel. Very cool. We honor the sense of the game, the sense of wonder in the world and the mystery of animals, as Trickster characters are often portrayed as animals – coyote, rabbit, fox, spider, crow, the monkey king, etc., worldwide. world, in all the diverse cultures of the world.