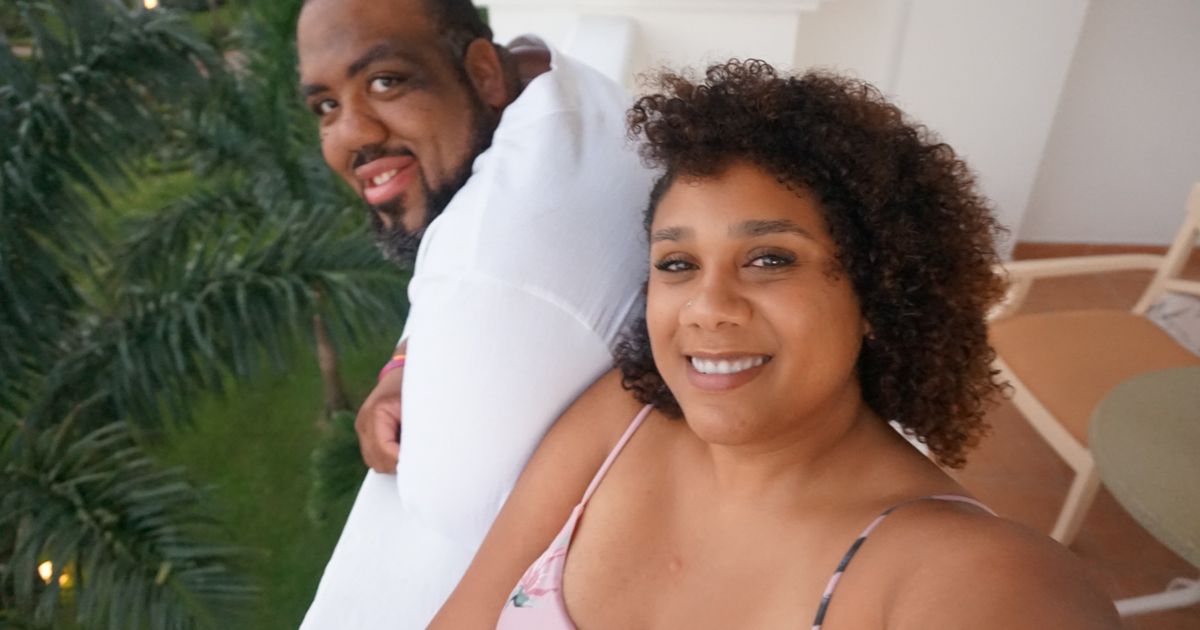 From the moment Jazmin “Jazzy” Olivo and Courtney Isaiah Smith met, music became a cornerstone of their relationship.

Now, over a year after Smith’s untimely death from COVID-19, Olivo is releasing the music they made together – to keep his legacy and their collaboration alive.

“Our first date was full of music,” she said in a recent interview.

The two had met when they were in a jazz-fusion band, called The Mix. They had in common the fact that they first got into music when they were three years old.

The couple talked on the phone for a long time before they met for a date – because, Olivo said, they were both shy. Smith came over, brought his keyboard and his microphone, and they started talking about music and making things.

“It was having fun with the music and just being us, with no expectations or perfection,” Olivo said. “Just keep it simple, be funny and enjoy what we do.”

Smith raised Tejano star Selena and sang along to her hit “Como La Flor.” Olivo, who is Dominican, asked him if he knew what he was singing about and jokingly offered to translate for him.

When she sang “Billie Jean” by Michael Jackson, Smith, in turn, asked the same question. Olivo said she confessed to Smith that she didn’t really understand what she was singing, as she learned the song when she didn’t speak English.

She stops to laugh at the memory.

“We never believed in love [or] attraction at first glance, but we got it,” she said.

(Courtesy of Jazzy Olivo) Singer Jazzy Olivo, left, with her boyfriend, musician Courtney Isaiah Smith. Smith passed away on January 25, 2021 from complications from COVID-19, and Olivo is working hard to keep his musical legacy alive.

A novel in music

Smith and Olivo had been together for seven years. Then Smith — known to the Utah music scene as the founder of the Jazz Vespers Quartet — died Jan. 25, 2021, of complications from COVID-19.

Now Olivo is working to continue their musical journey, releasing the music they worked on together before his death.

It means struggling with herself, both in her personal life and as a solo artist. The grieving process has been “very devastating” for her, she said, but at the same time, “I feel like I’ve held on to the things that I know how to do best, which is- i.e. the music.”

Living together, co-writing songs was part of the daily routine, she said. “It was like, ‘Okay, well, the rice is cooking. Let’s do this, work on this thing.

One song, “Siente Conmigo” – “Feel With Me” – came out of a middle of the night session three years ago. Olivo recorded Smith’s voice at home.

“For some reason we never released [the demo],” she said. They had intentions, but tragedy struck.

On January 23, 2021, a Saturday night, Olivo said she drove Smith to Intermountain Medical Center in Murray. After dropping him off, she said, she could no longer communicate with Smith.

The COVID-19 pandemic was still raging and the vaccine had only been introduced a month earlier – and at the time was limited in Utah to people 70 or older.

Olivo said she waited in the Intermountain parking lot as nurses updated her on Smith’s condition. He was fine, she said, until—within an hour—Smith went unresponsive. He died on January 25, 2021, two days after entering hospital. He was 37 years old.

When Olivo got home, she said, it was snowing. She parked her car, got out and noticed something black on the side of the road. It was Smith’s cell phone, which he had dropped two days earlier. When she took it in and plugged it in, it was still working.

“The very last thing, in some professional way, that Courtney shared with me was her passwords to her electronics, especially her phone,” she said.

On the device, she found notes he had written regarding his music, their music, who should play what, when and how, how to get things out, and some original recordings.

“He left me messages about what to do because I was completely lost,” Olivo said.

One of the original recordings was “Siente Conmigo”, which Olivo released on December 25, 2021 – Christmas Day – a few days before what would have been Smith’s 38th birthday.

“We edited it all and brought it to life, with its own voice,” she said.

The single’s cover features Smith’s handwriting and footage from one of his favorite photo shoots, taken by Olivo on his phone.

“He had so much to say through music, but he was definitely a shy person,” she said. “He expressed his feelings through music. Like ‘Siente Conmigo’ was because we kind of broke up and he didn’t know how to tell me how much he loved me and needed me in his life, so he wrote a song.

(Courtesy of Jazzy Olivo) Singer Jazzy Olivo, right, performing at The Gateway’s Olympic Legacy Plaza with her boyfriend, musician Courtney Isaiah Smith. Smith passed away on January 25, 2021 from complications from COVID-19, and Olivo is working hard to keep his musical legacy alive.

Olivo is scheduled to perform with his band on August 17 as part of the Excellence in the Community show at the Gallivan Center, 239 S. Main St., in downtown Salt Lake City. Melanie Sawyer, a friend of Smith, will take her place on keyboards.

Olivo said she was excited to perform, because “it heals”.

On June 29, Olivo released “Kidi Boom”, a song Smith wrote. She plans to release another song by the end of the year.

One of her and Smith’s goals with The Mix was to introduce the different types of music in Salt Lake City, especially the different styles of jazz.

“We wanted to make this part of town aware that black communities make black music and jazz music, which is black music, and embrace it in so many different ways,” she said. declared.

She said minorities have a harder time in the music scene, especially when trying to reach people they can learn from and get support to do their own thing.

For Olivo, music has been a lifeline many times over, and while she’s still learning to navigate this new version of herself, she said, “Everything I post and do is from the heart. “

Olivo said it was his journey and his responsibility to share Smith’s magic and legacy with others. He was, she says, her kindred spirit, bandmate, co-producer and best friend.

“He touched so many lives, so many musicians and so many viewers,” she said. “He was a person who loved to live and loved to live because of the music.”

The Jazzy Olivo Quintet is scheduled to perform Wednesday, August 17 as part of the Excellence in the Community show at the Gallivan Center, 239 S. Main St., in downtown Salt Lake City. The concert is free to the public.

The ‘Chicago’ creative team at Dutch Apple has long been associated with the Broadway show, its revival and previous stars | Entertainment