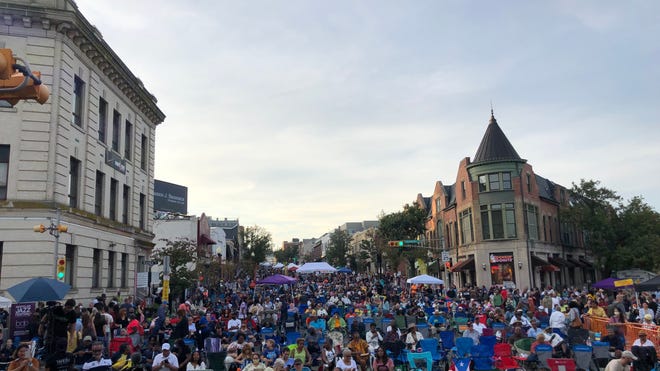 “We made the impossible possible”

Melissa Walker, founder and director of the Montclair Jazz Festival and the nonprofit Jazz House Kids, has had more than her share of setbacks.

This year, it looked to be more or less the same. As she was planning this spring, the Delta variant was raging and only small gatherings were allowed. The crowding of tens of thousands of people into Nishuane Park, where the festival was born 13 years ago as an outdoor recital space for students, was not going to fly.

Once again Walker spun, setting her sights on a place she had long dreamed of, where people could move and businesses could enjoy: the downtown streets. She is said to have a summer concert series at Lackawanna Plaza, followed by a one-day festival in September.

The kicker? She wanted to close half a mile of Bloomfield Avenue, a county road and the city’s main thoroughfare, from North Fullerton to Lackawanna Plaza, all day, which had never been done before. Even at the height of the pandemic, the city initially resisted the closure of Little Church Street to enable shopping and dining at social distance.

On Saturday, against all odds, Walker’s dream came true. The Montclair Jazz Festival’s first “Downtown Jamboree” drew around 25,000 festival-goers to the business district. Bloomfield Avenue was filled, not with cars, trucks and buses, but with people – mingling, eating, drinking, dancing and listening to a hundred world-class jazz musicians on four stages.

The story continues under the gallery

“Riding this size and scale of a festival into a pandemic, after weeks of Ida’s rain and flooding, seemed impossible,” Walker said. “Even that day, it seemed impossible. But it exceeded all expectations, all dreams. It was a glorious day, beyond our wildest imaginations.”

When she initially proposed a downtown festival to city officials, telling them that she wanted the street closed for eight hours, they thought she was joking, she said.

But she found strong allies in Essex County Commissioner Brendan Gill, a resident of Montclair; David Placek, the new developer of Lackawanna Plaza, and Mayor Sean Spiller, who told him, “If there’s a time to do something big, it’s now. Let’s go.

She partnered with NJ Transit and NJ Tourism to put up billboards along train routes and in Manhattan, and the sponsors stepped up, providing the funding to ensure that all musicians would be paid and that the entry would be free for all.

“It was important to me that the event was accessible to everyone,” she said.

Walker’s husband, seven-time Grammy-winning bassist Christian McBride, artistic director of the Newport Jazz Festival as well as Montclair’s, lined up more than 100 musicians, many of whom needed work after their long hiatus from live performances.

Jason Gleason, director of the Montclair Center Business Improvement District, was also a key player, rallying support from business owners, some of whom were concerned about the impact of the all-day shutdown on their bottom line.

Many were thrilled afterwards, Walker said. Restaurants set up trucks or service stations, and long lines formed; vendors displayed their wares in the street. Walker has heard from several restaurants and seen Instagram posts from business owners reporting record numbers of customers.

She asks business owners to complete a survey at surveymonkey.com/r/QJPYXGF.

The event was a wake-up call for Lackawanna Plaza, the 8-acre historic site, vacant for years, which hosted the main stage on Saturdays and smaller concerts during the summer. Turtle and the Wolf and Laurel and Sage ran a pop-up restaurant there called Pineapple Express.

One of this summer’s events, a dance party where McBride played records and played the bassline live, drew hundreds of people to Lackawanna Plaza.

“We didn’t know if someone would come,” Walker said. “Three songs, we had hundreds of people doing the electric slide; 80 year old women with their handbags slung and 2 year old kids, and kids doing break dancing, it was amazing. “

On Saturday, the musicians were clearly invigorated by the chance to perform in front of such a large and enthusiastic crowd.

“There hasn’t been a lot of live music over the past year and a half,” said Emmet Cohen, a Jazz House Kids and Montclair High School alumnus, who spoke after playing the piano in his trio. eponym. “Feeling the vibes and the appreciation of people is just really saying to musicians, that people really need music.”

Walker said the festival was a turning point for Montclair and that it was fitting that jazz, “that great American art form, that grain music, with its real diversity in its ages and its people”, should have been part of it. the catalyst.

“This music tells the story of America, the struggle to know who is going to come on stage, who we are going to worship. It seems fitting that jazz brought us together in this joyous symphony, ”she said.

“It was a day that defied everything. We made the impossible possible. Montclair will never be the same again.”

Julia Martin covers Montclair for NorthJersey.com. For unlimited access to the most important news from your local community, please subscribe or activate your digital account today.

GLOBAL JAZZ AWARDS, celebrating 100 years of Jazz to come in 2022

HSU’s Department of Dance, Music and Drama is hosting a Faculty Artist Series…