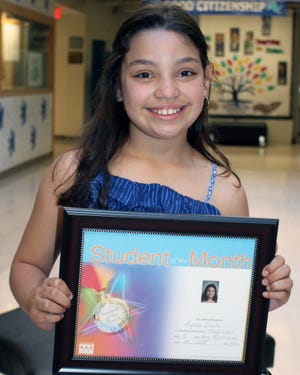 WEST BOYLSTON – As the school year draws to a close, the school committee has seen some of the results of the work in the classrooms, honoring three students of the month for May.

Major Edwards Elementary School principal Alex Audette said Alyssa Irula was chosen by the fifth-grade team as their student of the month for May.

“Alyssa is the student that all teachers love to have in their classroom. She asks thoughtful questions, participates in all lessons in all subjects and works well both independently and in groups,” Audette said. “Alyssa’s favorite subject this year is math because it’s easy for her.”

At school, Alyssa is in the after-school art club. Outside of school, Alyssa dances competitively in the styles of jazz, lyrical, tap, hip-hop and ballet. In the fall, she is a cheerleader for the city’s football teams. She also takes a tumbling class to continue to progress in dance and cheerleading.

“When she grows up, she’s not sure what she wants to do, but she knows she wants to continue to be involved in dance one way or another,” Audette said. “Alyssa’s exceptional work ethic and kindness to all make her an excellent choice for this month’s student of the month.”

“We are very proud of you,” school board member Jason Ponticelli told Alyssa. “It’s a huge honor.”

Honored as student of the month at West Boylston Middle School, sixth-grader Melina Lam “gets A’s in her classes because she’s very diligent and driven,” vice-principal David Lizotte told the committee. “She demonstrates respect, responsibility and participation as part of the college philosophy.

“Melina applies teacher feedback to future assignments and activities,” Lizotte said. “She often takes a broad view of topics and provides evidence and examples to support her answers.

“She is polite, kind and helpful to her peers. Melina demonstrates a positive attitude and perseveres through challenging assignments and group projects,” he added.

Melina is an active member of the Middle School Student Council and Girl Scouts.

She is a huge Star Wars and Harry Potter fan.

As the committee noted her honor, she acknowledged that her favorite subject was math.

Lucy will serve as the regional chairperson and represent the region on the state board for the 2022-2023 school year.

“In addition to her regional responsibilities, she has also been a supportive and enthusiastic member of the student council, attending all meetings and helping out with all events,” Lizotte said. “Lucy is a star in her world history class with honors and maintains an A, participates with passion and supports her classmates.

“Lucy took the initiative to organize a ‘Thank You’ and ‘Farewell’ recognition to the Assumption student teacher who co-taught her class, giving him a very nice card and a gift”, said he declared.

“She exemplifies the type of student we hope all students will become at West Boylston,” he said.

“She’s an amazing, positive leader,” Lizotte said, and he detailed an incident that happened on the trip to Washington, DC, when he sent them the wrong way on the bus. They did but Lucy and her friends had been singing as they walked and a man came out later and told them his autistic adult child had shown great emotion as they walked past and sang and loved it.

“Lucy is that type of leader, getting people to do positive things,” Lizotte said.

Member Jen Breen asked what makes the school so good even though it’s small.

“I just think about the opportunity that a small school provides,” Lucy said. “At West Boylston, you don’t have to be the best to get involved.”

Superintendent Richard Meagher also paid tribute to Principal Mary Wattu, whose academic achievements earned her a guest appearance at the Worcester County Superintendents Association Scholars Luncheon at the College of the Holy Cross on April 13. Mary joined the select group of central Massachusetts scholars for lunch at the Hogan Center.