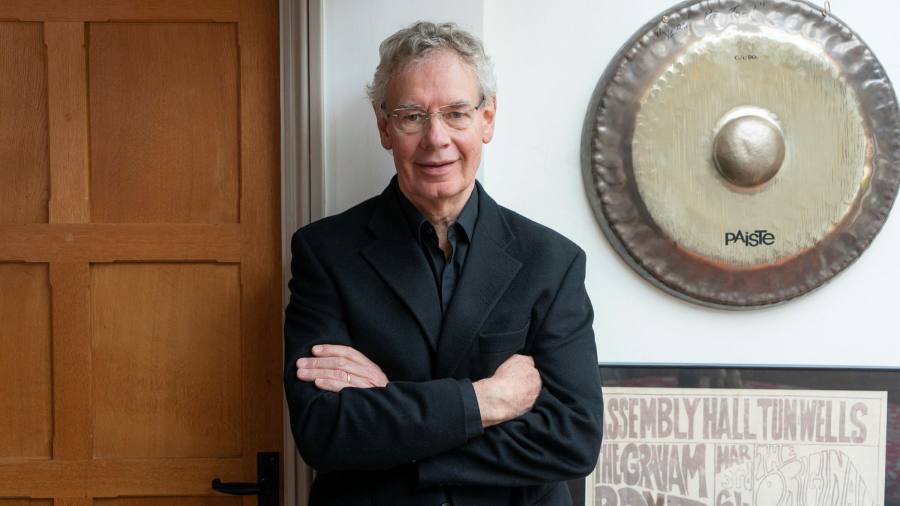 One of the most acclaimed drummers in rock history beats a beat on the table while waiting for a decaf Americano to arrive. Compared to the complex and flexible time signatures that Bill Bruford is famous for, this one is a simple 4/4. “Right, left, right, left,” he said. “On two surfaces, it sounds like that.” The beat turns funkier as he starts drumming with his right hand on his leather briefcase.

My percussion art lesson takes place in a café in Guildford, the prosperous suburban town of Surrey in south east England. Bruford, 72, lives with his wife Carolyn in the nearby Surrey Hills countryside. It’s an incongruous place to meet a famous rock drummer, though there’s symbolism too: it was at another cafe, now long gone, that Bruford got his start.

In 1968, when he was 19, he was part of a group of musicians who met in the basement of a London West End cafe to choose a name for their band. There, in the depths of the Lucky Horseshoe, was born Yes, the pioneering progressive rock band.

Three of their songs open the new box set Bill Bruford: Make a Song and Dance. These are exuberant relics of the days when 10-minute epiphanies on the power of the sunrise with meter changes between 6/8 and 3/4 (with a bit of 5/8 for good measure) could not only extend the formal properties of rock but also make stars of their creators.

“Popular music is supposed to be three chords and the truth, and anyone can hit it – that’s why it’s popular,” Bruford says. “But there are other popular musicians who want to do more than just those three chords.”

How much more is evidenced by his six-CD career retrospective. Two groups other than Yes dominate his 70 titles. One is King Crimson, the fiercest and most progressive prog act of them all, which Bruford joined in 1972. The other is Earthworks, which he formed in 1986 in order to explore his first musical love. , Jazz. There are also numerous collaborations, ranging from songs with British folk rocker Roy Harper to instrumentals with Japanese guitarist Kazumi Watanabe.

Drum solos are a fun old thing. Rather laughable. They have an interesting origin in vaudeville

“My fun in music,” he says, “has always been that it’s something you do with other people in real time, preferably with lots of strings and gut and cymbals.” Real musical instruments, in other words, not the push of a button: “There are many ways to make music with computers, of course, but that’s not my particular way.”

He started playing the drums as a child, inspired by great names in American jazz like Art Blakey, whom he used to watch, captivated, on a weekly BBC TV show in the early 1990s. 1960. “I can see it in my mind now,” he recalled. “Art Blakey on a drum rises above [trumpeter] Freddie Hubbard. The music wasn’t going anywhere without Art’s permission. And I just thought, this guy takes the total load.

His background was far removed from the black American jazzers he idolized. Growing up in Kent, he was privately educated, like other British prog-rock notables – the members of Genesis, for example, a band with whom Bruford had a brief and unhappy stint on drums as a drummer. worker hired in 1976.

At Tonbridge boarding school, he developed his understanding of jazz with a clique of like-minded friends who preferred Coltrane to Hendrix. Progressive rock gave him the opportunity to combine both forms. Rather than being attached to a simple backing beat for singers and guitarists prancing up front, Bruford insisted on playing a more open role.

His playing was as much about creating melodies as it was about measuring time, with skillful use of polyrhythms and precisely placed accents. He preferred delicacy and groove to explosive displays of showmanship, like the 10-minute drum solos of prog-rock infamy.

“Drum solos are a fun old thing. Rather laughable. They have an interesting origin in vaudeville,” he says. “Usually if I highlight drums it will be on top of some vamp so you can see what I’m playing against which is much more interesting. I have a light grip so I’m not going to be confused with [powerhouse drummers] Cozy Powell or John Bonham. I still have my audition.

It’s easy to get too loud on the drum kit. It’s really hard to do much less. Playing fast and light requires real skill

Progressive rock’s efforts to elevate rock to the level of classical music and jazz caused a backlash in Britain in the late 1970s. It was derided as indulgent and elitist, the work of pampered schoolboys private. Bruford is engaging and dryly humorous, with a very English tone of self-mockery, but he was also able to make some beautifully noble remarks. In 1976, he told readers of the musical weekly Sounds that playing to a rhythmically simple song by Roy Harper was “like asking Nureyev to dance a waltz.”

“Did I say that?” he said, sputtering a bite of almond croissant. ” It is shameful. It’s a great example of the unbearable arrogance of a young drummer. I was completely obnoxious in my mid-twenties. Phenomenally ambitious and very arrogant. It was a big problem, then I got better – I hope,” he adds with a laugh.

When Bruford listens to the four decades of work collected on the box set, he hears himself improving as a musician. “Much more subtle, much more capable of involving rather than shouting. It is very easy to make too much noise on the drum kit. It’s really hard to do much less. Playing fast and light requires real talent.

There was widespread bewilderment when he left Yes in 1972 at the time of their biggest commercial breakthrough with the album near the edge. But Bruford wanted musical improvement, not fame. His membership in King Crimson matched him with a kindred spirit, the band’s lead guitarist, Robert Fripp. They had a “hair-raising sound,” as he puts it, an all-out ethic that required both self-discipline and an appetite for risk. Fripp once compared Bruford’s game to “a wall of flying bricks”. “Either you go or you duck,” says the drummer.

He no longer performs, having retired from the stage and studio in 2009. “You have to go so fast,” he explains. “Suddenly there is hip-hop. How did we get here and how can I help? How can Billness get into this? Finally, around the age of 60, I no longer heard in my ears how I could contribute.

After dropping an economics degree to take up drumming with Yes in 1968, he returned to college to do a doctorate in creativity and drumming, earning his doctorate in 2016. “I still love drums with a passion he says. He is tempted to install his kit again, but only for private use at home.

“I feel extremely privileged,” he says, looking back on 40 years of work. “I never really played anything that I didn’t want to play. You say that to classical musicians and they think you’re crazy. ‘How is it possible? We grind on symphonies that we’ve been playing for years. We are told where to go and what to do. I really feel like I’m at the end of an era, being able to play exactly what I liked, where and with whom I wanted.